Twenty years later, the e-commerce giant is worth over $600 billion. Every dollar invested in Amazon in 1997 is worth nearly $1,500 today.

That means a stake as small as $700 at the time would now be worth more than $1 million.

But the real prize goes to venture capital investors like Tom Alberg, whose firm Madrona put $50,000 in Amazon a year before it went public.

That 1% stake is now worth about $6 billion.

Usually that kind of action is out of reach.

You can’t access pre-IPO stocks, or you lack “risk capital,” funds you can afford to put into speculative investments.

But there is a way you can get in on the next Amazon, Alphabet Inc. (Nasdaq: GOOGL), or Alibaba Group Holding Ltd. (NYSE: BABA), before they become giants.

Today, I’ll show you how you can become an early investor in what could be the next Amazon-like success story.

First, let’s take a look at the handful of pre-IPO breakout candidates we want to get a piece of…

Let’s Play Venture Capitalist
To get started on our path to “rocket stock” profits, we’re going to step into the shoes of a venture capitalist. Our mission: find the company that could turn thousands into billions for investors in just a couple decades.

Here are the top contenders.

Plenty: Vertical farming has been a preoccupation for many entrepreneurs in recent years. By utilizing vertical space, rather than acres and acres of land, food can be grown in large quantities close to urban centers, and can therefore be transported more efficiently.

It’s been a tough nut to crack though. Several startups have tried and failed to make it economically viable in recent years.

Plenty, a startup based in San Francisco, may have figured it out.

Plenty’s scientists have taken the concept of “vertical farming” to its extreme, literally growing their crops in a vertical wall of soil. The setup allows gravity to do much of the work of feeding the plants. That, plus an innovation to remove the excess heat from LED lights, puts Plenty at the forefront of this agricultural movement.

Plenty grows plants based on the tastes of consumers and chefs: Siberian kale and red leaf lettuce. There’s no need to favor crops like iceberg lettuce that will survive a long trip on a truck.

Plenty has started offering its products in the Bay Area. Now, thanks to an injection of $200 million last year, the plan is to expand rapidly across the globe, with the not-so-modest goal of helping to feed entire populations with efficiency.

In other words, Plenty might be the first significant player in the future of food.

Brain Corp: Brain Corp. CEO Eugene Izhikevich envisions a future in which robots will be “as commonplace as computers and mobile phones are today.” And Brain has the software – or rather, the “brain” – to run those robots. Its BrainOS artificial intelligence platform can give life – including motion control and environmental perception – to robots assembled from off-the-shelf components.

The keys to success are adaptability and scalability.

Brain’s software can be fitted to existing, manually operated machines to make them intelligent. And because BrainOS is a cloud-based system, once one robot learns its tasks, that knowledge can be relayed immediately to every robot in the fleet.

The San Diego-based company has raised about $125 million in early funding so far. As we’ve explained before, the robot revolution is here. And Brain Corp. is in a prime position to become a global leader in the artificial intelligence that will power it.

OneWeb: The goal of OneWeb is as ambitious as its name: to provide Internet access for the entire world.

In spite of the seeming omnipresence of the Internet, we all know it can be spotty, and there are many parts of the world that lack access. OneWeb’s solution is to launch nearly 900 satellites in space over the next couple years and offer low-cost access at ultra-high speeds across the globe.

The company is building three satellites per day at its Florida factory and plans to get 10 into low Earth orbit this year.

OneWeb raised $500 million in 2015 and another $1 billion in late 2016. The goal is to eventually raise $30 billion and erase the world’s digital divide by 2027. That’s a tall task, and OneWeb has competition on that front from the likes of Facebook Inc. (Nasdaq: FB) and Google.

But if the plan continues successfully, OneWeb could be the Internet provider for the world a generation from now.

Flipkart: With a valuation of nearly $8 billion and 33,000 employees, Flipkart may already be too big for this list. But it’s worth our attention for the untapped potential of its market. Just like Amazon took off in the United States and Alibaba took off in China, some e-commerce company is bound to take off in India one of these days. And Flipkart is a solid horse to pick in this race.

Many analysts have soured on India, since its economic growth has slowed recently. But first, the slowdown is largely the result of governmental measures that have temporarily disrupted business activity and cracked down on corruption. Second, even that was only enough to bring the growth rate down to 5.7%, and it has since rebounded to 6.3%. That’s more than double the U.S. growth rate. 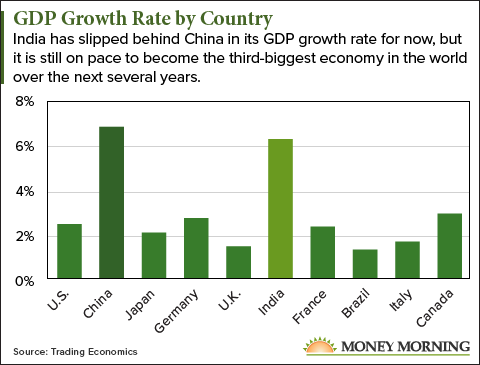 In other words, there’s every reason to believe that India’s economy will continue to expand at a rapid pace. Merrill Lynch expects it to leapfrog the UK, Germany, and Japan to become the world’s third-largest economy by 2028.

Like Amazon, Flipkart began as an online bookstore and popularized the concept in India. Since then, the company has expanded into a full array of products, including its own brand.

India has an Internet user base of 480 million people, and according to Statista, that figure will grow 38% by 2021. With only 26% of the population accessing the Internet in 2015, the ceiling for e-commerce is extremely high.

Flipkart has competition for e-commerce domination in India, but it’s been helped by some high-profile backers, including one that also has a large stake in Chinese juggernaut Alibaba. That has sparked rumors of a potential merger that could handsomely reward Flipkart’s early investors.

Vir Biotechnology: Like OneWeb, this San Francisco-based biotech has a grand vision: to fight disease in every corner of the world.

To accomplish this, CEO George Scangos has formed partnerships with private enterprises, non-profits, and academic institutions. In areas of the world that can’t afford to purchase its products, one of its partners, such as the Bill & Melinda Gates Foundation, can step in.

Vir is focusing on some of the toughest diseases to treat, such as hepatitis B, HIV, and Zika.

“Five years ago, we would have been banging our heads against the wall,” Scangos told Bloomberg. But recent advances in diagnostics and understanding the immune system have opened a window of opportunity for ambitious drug makers.

In September, Vir announced the acquisition of Humabs BioMed, which brings 15 antibody candidates into its portfolio. It also announced partnerships with Alnylam Pharmaceuticals Inc. (Nasdaq: ALNY) and with research departments at Harvard and Stanford in order to develop new, groundbreaking treatments.

The efforts of the Gates Foundation have nearly wiped polio from face of the earth. With more than $500 million in financing, highly strategic partnerships, and an ambitious vision, Vir Biotechnology could be the driving force in eradicating several more ailments that plague humans across the globe.

Which One Is Your Rocket Stock, and How Do You Buy It?
For those of us without gobs and gobs of money, there are two barriers to investing in any of these companies.

First, very few have access to the private equity market from which these enterprises attract financing.

And second, it’s nearly impossible to predict which company is going to take off and which is going to flicker out.

If it was easy, more people would have bet on Amazon becoming the giant it is today.

Even Jeff Bezos himself thought he had about a 30% chance of succeeding when he launched the online bookstore.

And that might have been a generous assessment at the time – much better than the average success rate for startups.

What if, instead of Amazon, you had invested in Pets.com or Webvan? Both of those companies were early movers in sectors that are thriving today – and then went bankrupt.

The answer, of course, is that you don’t put all your eggs in one basket. Venture capitalists spread their bets out across a variety of companies, knowing that it only takes one Amazon-like rocket stock to make the investment pay off in spades.

You don’t need to pick between the five companies above. In fact, you can buy all of them. And you can do it for less than $50 per share.

If You Can’t Be a Venture Capitalist, Buy One
The answer is Vision Fund, established in 2017 as the largest private equity fund in the world. Money Morning Chief Investment Strategist Keith Fitz-Gerald has called it “one of the biggest wealth-building opportunities you’ll ever see.”

The fund is operated by Japanese telecommunications company SoftBank Group Corp. (OTCMKTS: SFTBY), which accounts for about $28 billion of the fund’s $100 billion anticipated war chest.

SoftBank’s CEO, Masayoshi Son, made a bet on Alibaba when the company was just a year old. SoftBank’s stake in that company is now worth over $100 billion. That and an early investment in Yahoo! Japan have helped provide SoftBank an average annual return of 44% on its investments over the last 18 years.

You might have guessed by now that it was SoftBank who also made a big investment in India’s Flipkart, as we mentioned above. Not just Flipkart, but each of the five pre-IPO companies we looked at are in Vision Fund’s portfolio, along with a dozen other up-and-coming companies so far. 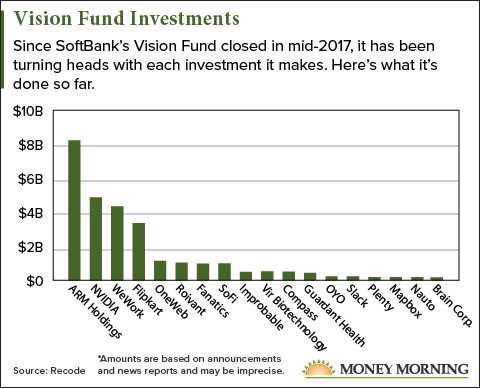 SoftBank is your entry point in the world of venture capitalism, so you can enjoy watching the next rocket stock take off knowing that your portfolio is going along for the ride.

“You know what Son’s track record is and what his plans are,” Keith wrote in May. “There is little doubt in my mind that you’ve got a legacy holding on your hands if you do.”