Each week I set out to find one stock that I think is ready for a major move to the upside. To accomplish this, I start with a set of stocks that meet certain fundamental criteria. Once I have these stocks isolated, I look at the technical analysis for a company that isn’t overbought, perhaps has had a slight pullback but is still in an uptrend, and looks as though it is ready to resume that uptrend or reverse from the pullback.

For the fundamental criteria, I use Investor’s Business Daily and the EPS rank and the SMR rating.

I look for companies that rank in the top 20% of the EPS rank category, so a rank of 80 or higher is necessary.

Heading in to February, I went through the universe of stocks and found 211 stocks that met my fundamental criteria and had average trading volume of at least 5ooK per day. I don’t want to write about a stock that trades 50,000 shares a day and then have readers trying to get in on a thinly traded stock.

After paring it down to 211, these are the eight stocks that I think should be targeted as buys in February. There are various reasons for liking them- trendlines, trend channels, oversold, etc., but for one reason or another, these eight stood out to me for their potential gains over the coming month.

Apple Inc. (Nasdaq: AAPL) – we all know the tech giant for their iPhones, iPads and their computers. The company has done incredibly well over the last 15 years or so with the stock price jumping from under $1 in 2003 to a recent high of just over $180. The company became a marketing machine and has an incredibly loyal following. A recent admission that they intentionally slowed older phones has caused the company some embarrassment and there have been some concerns about the latest iPhone sales results. These events have caused a slight pullback in the stock ahead of its earnings report later today. 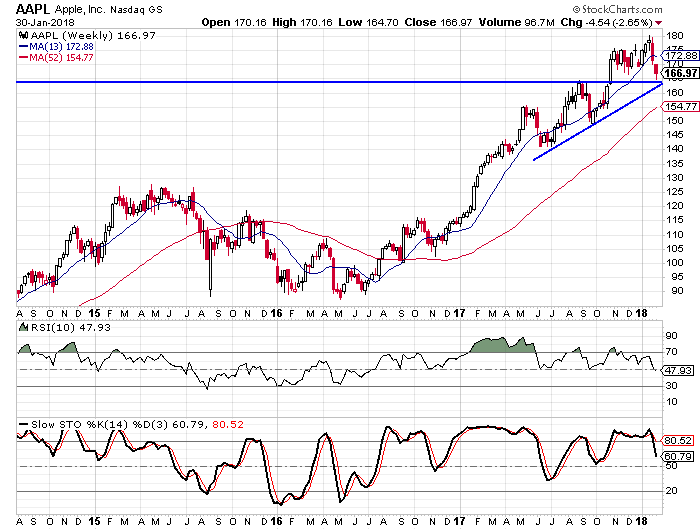 We see on the chart that the weekly stochastic readings have moved out of overbought territory and the 10-RSI has moved below the 50 level for the first time since November ’16. We also see a trendline that connects the lows from the last seven months and it is converging with a possible flat-line support area in the $164-$165 range. This area marked a temporary high back at the end of August and could now act as support. With the earnings report due out after the closing bell today, I would wait before jumping in. If the earnings are greeted modestly and without a great deal of selling, I would look to buy AAPL shares in the coming days.

Broadcom Limited (Nasdaq: AVGO)- Broadcom designs, develops, and supplies a range of semiconductor devices with a focus on complex digital and mixed signal complementary metal oxide semiconductor based devices and analog III-V based products worldwide. The company operates through four segments: Wired Infrastructure, Wireless Communications, Enterprise Storage, and Industrial & Other. It has been pursuing rival chipmaker Qualcomm in recent months and that has led to a little weakness, that along with weakness from the semiconductor industry as a whole. The company was formerly known as Avago Technologies Limited and changed its name to Broadcom Limited in February 2016. Broadcom Limited was founded in 2005 and is headquartered in Singapore. 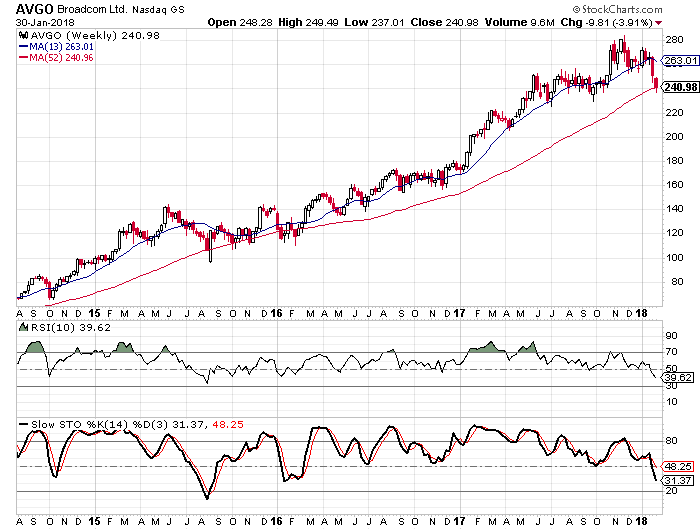 The chart for AVGO shows that the weekly stochastic readings are below 50 for the first time since the first quarter of ’16. We can also see how the recent pullback has brought the stock down to its 52-week moving average for the first time since that same quarter. Another factor that got my attention on Broadcom was the current sentiment reading. On January 25, the sentiment hit its most bearish level since September ’16.

The fact that the company deals with institutions rather than retail clients is a plus in the current environment. Institutional investors won’t stop operating if we have a pullback, but retail investing activity dropped considerably after the bear markets in 2000-2002 and 2007-2009. Should we go through another bearish phase, it shouldn’t affect BGCP as much as it would a retail trading firm. 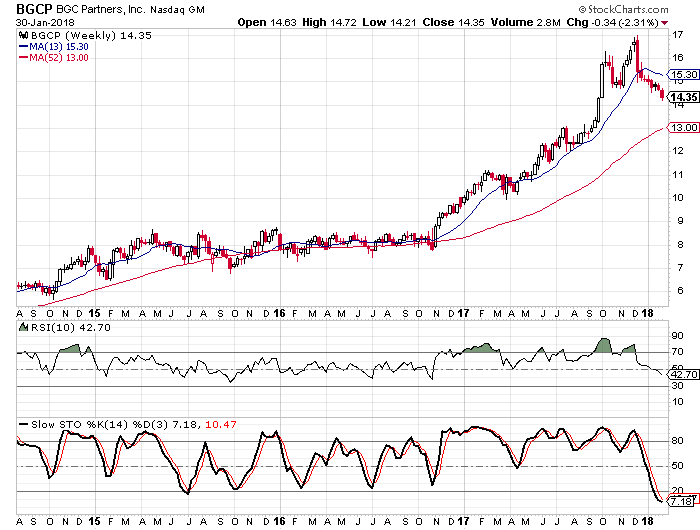 The one thing that jumped out to me on the chart is the oversold level of the weekly stochastic readings. The stock is the most oversold it has been in the last three and half years and with a little further research, I found that it is currently the most oversold it has been since August ’12. You might want to wait for a bullish crossover from the weekly stochastic readings before pulling the trigger on this one.

New Oriental Education & Technology (NYSE: EDU) – The company provides private educational services under the New Oriental brand in the People’s Republic of China. The company operates through Language Training and Test Preparation, Primary and Secondary School Education, Online Education, Content Development and Distribution, Pre-School Education, Overseas Study Consulting Services, and Study Tour segments. The company is headquartered in Beijing and was founded in 1993. The company had a network of 77 schools, 855 learning centers, and 20 bookstores offering is products as of May 31, 2017. 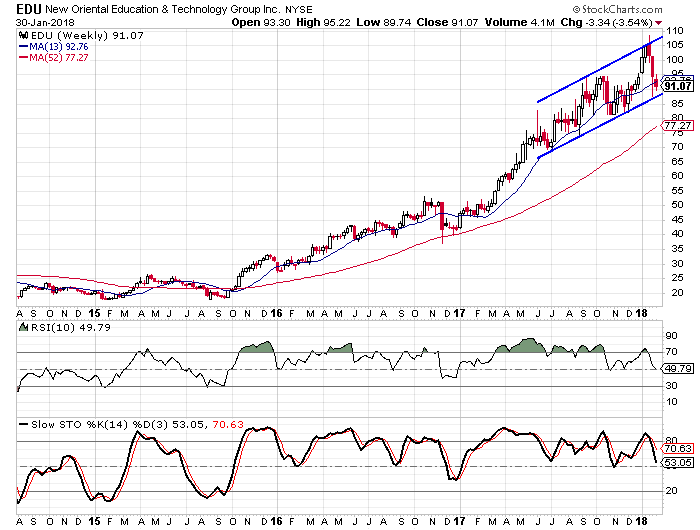 EDU has formed an upward-sloped trend channel over the past eight months and is sitting just above the lower rail of the channel at this time. The weekly oscillators are as low as they have been in the past year and I look for the stock to reverse the recent pullback and remain in the channel. I can see EDU jumping back above the $105 level in the next month to month and a half.

FormFactor (Nasdaq: FORM)- FormFactor designs, manufactures, and sells probe cards, analytical probes, probe stations, integrated measurement systems, thermal sub-systems, and reliability test systems. The company offers probe cards that are used to test various semiconductor device types, including system on a chip products, mobile application processors, microprocessors, microcontrollers, and graphic processors. The company offers its products through its own sales team, manufacturers reps, and a network of distributors in the United States, Asia, and Europe. The company is headquartered in Livermore, California and was founded in 1993. 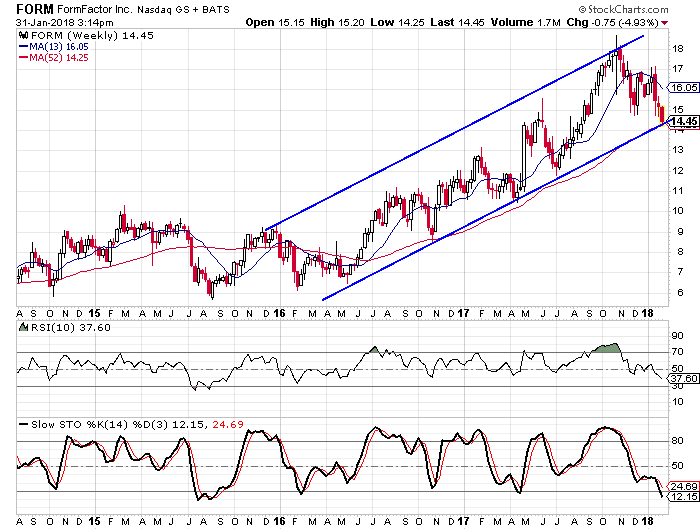 FORM is yet another stock that has formed a trend channel and this one goes back to the beginning of ’16. The stock is sitting right on the lower rail of the channel after a pullback over the last three months. It is also sitting just above its 52-week moving average which has served as support for the stock on a couple of occasions over the last year and a half. The weekly oscillators are the lowest they have been for some time. This is another instance where you might want to wait for a confirmation from a bullish crossover from the stochastic readings.

II-Vi Incorporated (Nasdaq: IIVI) – the company provides engineered materials and optoelectronic components worldwide and is a vertically integrated manufacturing company that develops innovative products for various applications in the industrial, optical communications, military, life sciences, semiconductor equipment, and consumer markets. The company was founded in 1971 and is headquartered in Saxonburg, Pennsylvania. 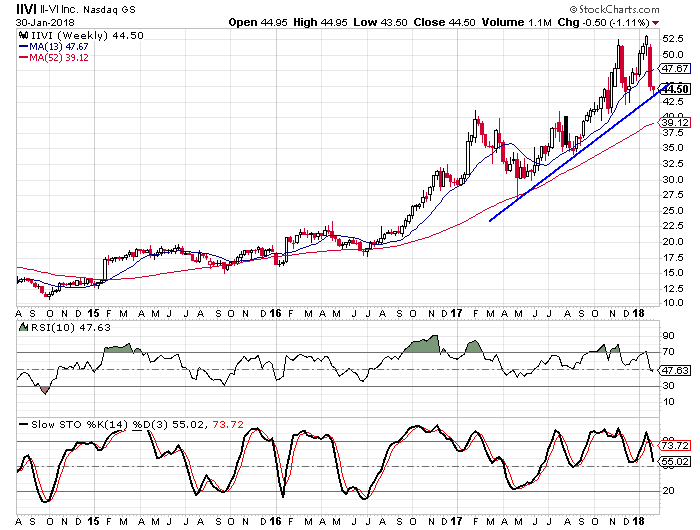 IIVI has been trending higher since last spring and the few pullbacks in the stock have formed an upwardly-sloped trendline. The stock is sitting just above the trendline at this time. The oscillators aren’t quite as low as they were last spring, but I think the support of the trendline should outweigh that fact. The sentiment toward IIVI was also a factor as it reached its lowest level May in the past week.

Micron Technology (Nasdaq: MU) – Micron is yet another semiconductor company. I don’t like having too many stocks from one industry on the list, but sometimes it is warranted. Micron operates through four segments: Compute and Networking Business Unit, Storage Business Unit, Mobile Business Unit, and Embedded Business Unit. The company is headquartered in Boise, Idaho and was founded in 1978, making it one of the oldest chipmakers. 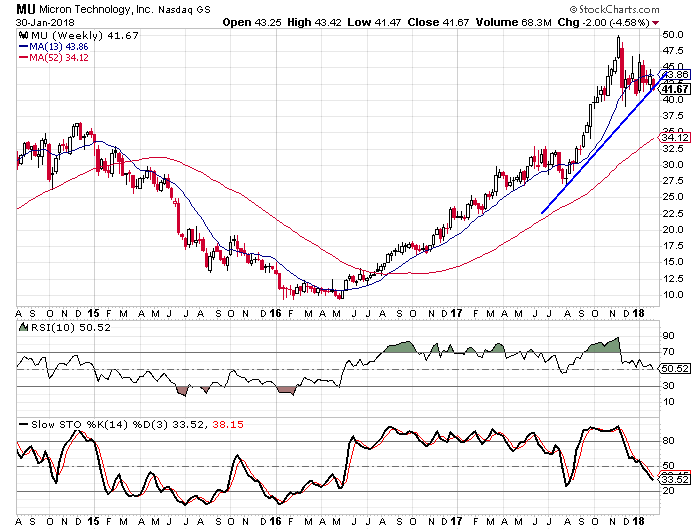 Micron has pulled back with the rest of the semiconductor sector over the last few months and has been grinding sideways since November. This has caused the oscillators to drop to their lowest levels since last summer and the stock seems to be forming a trendline that it may use as support. This is another instance where you might want to wait on a bullish crossover from the stochastic readings to confirm the trade. The last time this event occurred, the stock jumped over 40% in three months.

Xilinx (Nasdaq: XLNX) – Xilinx is our fourth semiconductor company, but the setup was too good to pass up. The company did fall after its earnings last week, but it was at an all-time high just prior to the report and the sentiment toward the company was pretty bullish. Even after the disappointing earnings report, the company is still one of the most fundamentally sound companies out there. Headquartered in San Jose, California, the company was founded in 1984. 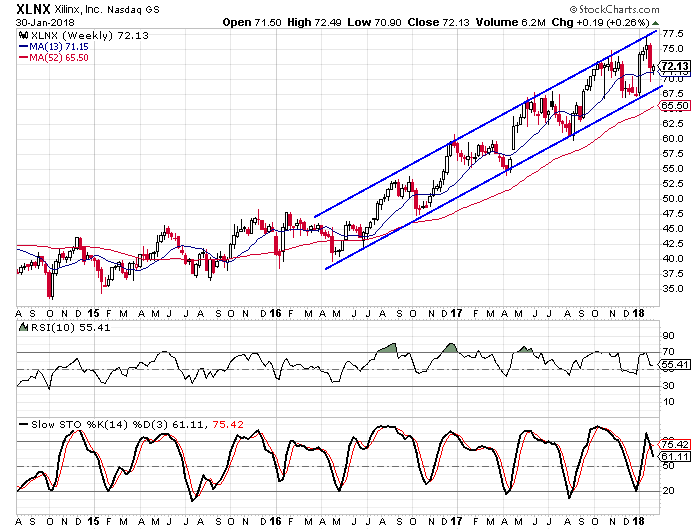 In addition to being another chipmaker, the stock is also another one that has formed a trend channel in the last couple of years. The fall that occurred after the earnings report earlier this month took the stock down away from the upper rail of the channel and it got close to the lower rail, but never came in contact with it. While I wouldn’t wait for the stochastic readings to make a bullish crossover like I have suggested on a few of the stocks, you might wait another week or so before buying the stock to see if it has indeed stabilized. The other option would be to wait for the stock to make contact with the lower rail.