Brooks is headquartered in Chelmsford, Massachusetts and was founded in 1978.

Brooks has seen tremendous growth in recent years with an average annual EPS growth of 51% over the last three years.

The EPS was up 62% in the most recent quarter and the company will release earnings again on January 30. The company’s sales have also been growing. 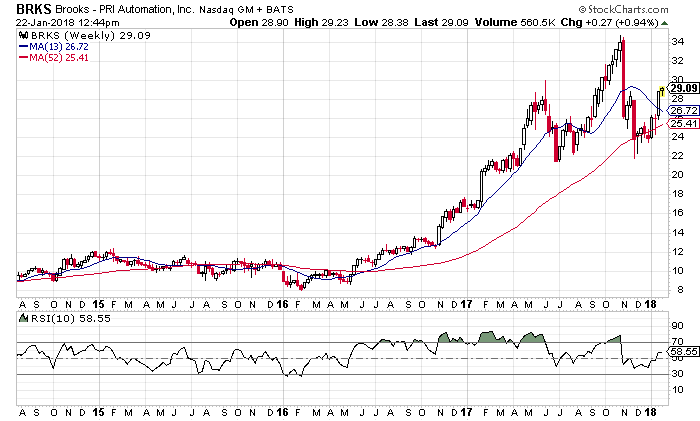 We see on the chart that the stock moved up sharply from mid-2016 through mid-2017 before it had a slight pullback. The stock bounced back from the pullback and jumped over 60% from the end of June through the end of October. The stock pulled back again in November, but found support at its 52-week moving average. The stock has already jumped over 30% from the low in November, but I think the stock still has room to move higher.

Suggested strategy: Buy BRKS with a maximum entry price of $30.00. I would set a target of at least $37 in the next six months (for a return of 27% from current prices). I would also set a stop-loss at $24. Keep an eye on how the stock behaves at the $34 level as there could be some resistance there.