Though your Social Security benefits are calculated based on how much you earned during your working years, the age at which you first claim them can cause them to go up, down, or stay the same.

That’s why it’s crucial to choose the right age to sign up for them initially.

Eligible workers get an eight-year window to file for Social Security that begins at age 62 and ends at age 70.

(Technically speaking, no one will force you to take benefits at 70, but there’s no reason not to).

But before you do, here are a few things you should know. 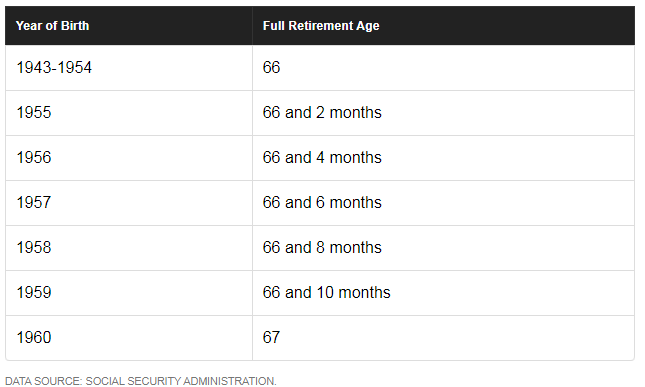 What this means is that if you have a friend or colleague who was born in 1954, their full retirement age might be 66. But if you’re a bit younger and weren’t born until 1960, you’ll need to wait an entire year longer before getting to collect your monthly benefits in full. Keep the above table in mind when deciding when to file, or you’ll risk losing out on some of the money you may have been expecting.

2. It pays to take benefits if you need the cash
Perhaps 66 isn’t your full retirement age — maybe yours comes a year later. But what happens if you find yourself out of work and desperate for money at 66? If that’s the case, then you may want to consider taking benefits then, even though you will face a reduction in benefits.

The reason? You’re better off losing roughly 6.67% of your benefits — which is what will happen if you file a year early — than racking up credit card debt that will wind up costing you 20% a year in interest charges. While any reduction in Social Security benefits could end up hurting you if you’re counting on that money in retirement, filing at 66 instead of 67 isn’t nearly the same thing as filing at 62 and taking what amounts to a 30% benefits cut. In other words, if you’re relatively close to full retirement age and have a reason to claim benefits immediately, you shouldn’t necessarily beat yourself up over it.

3. It may be a good choice if your health is so-so
One interesting thing about Social Security is that it’s designed to pay you the same lifetime benefit regardless of when you initially file. Here’s the logic: If you sign up at age 62 and slash your benefits by either 25%, 30%, or somewhere in the middle (depending on your full retirement age), you’ll get less money each month, but you’ll also get more payments than you would by waiting until full retirement age. And it works the other way, too: Sign up at full retirement age, and you won’t face a benefits reduction, but you also won’t collect those extra payments.

This formula, however, makes one key assumption, and it’s that you’ll live an average life expectancy. So what if your health is OK, but not stellar? In that case, it might pay to pull the trigger on benefits at 66, even if it means doing so a year prior to full retirement age. As a general rule, the shorter your anticipated lifespan, the sooner you should start collecting benefits. If you have reason to doubt your own longevity, you might avoid losing out on Social Security income in your lifetime by filing a little early.

Another point we haven’t yet touched on is that, if you delay Social Security past full retirement age, you’ll snag an 8% boost in benefits for each year you hold off, up until age 70. If your health is fantastic, that’s an option you’ll want to consider, even if your full retirement is 66 and you’re already there. But if your health is iffy, you’re better off not waiting longer than necessary.

Though 66 is a fairly common age to claim Social Security, be sure to keep the above factors in mind when making your personal decision. This way, you’ll make the most of the benefits you’ve worked for all your life.