After the big bounce back [Wednesday] and given the overbought levels for many stocks, I didn’t get very many stocks on the bullish scan that night, but the one that stood out the most was American Tower, the REIT is a leading independent owner, operator and developer of multitenant communications real estate with a portfolio of approximately 149,000 communications sites.

The chart shows that the stock bounced off of support at the $132.50 level and looks like it is ready to rally back up to the $147.50 level at the very least.

We saw a similar pattern in September and that set up the rally from $132.50 to over $152.50 in approximately six weeks. 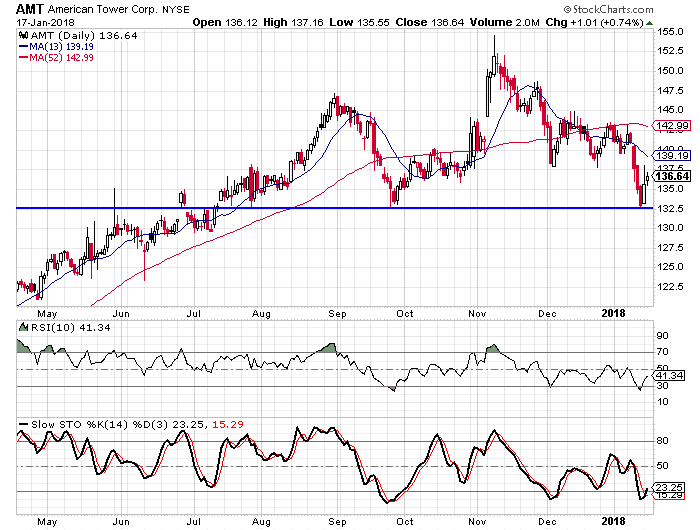 The sentiment toward AMT recently hit an extreme low and the only two times the sentiment has been more bearish in the past year were in early December, right before that brief rally, and in September before the big rally.

Buy to open the March Week One 134 strike calls on AMT at $6.00 or better. These options expire on March 2. Given the time frame from the rally in September, this option might be cutting it close in terms of providing enough time, but the traditional March options aren’t available yet. I looked at the April options as well, but the strike prices and asking prices hampered the risk/reward relationship greatly.  I would target a move to $147 for the stock and that would make these options worth at least $13.00 on an intrinsic basis. If the stock should drop below the $132.50 level, you will want to shut the trade down.

OPTIONS DISCLAIMER: Options involve risk and are not suitable for all investors. Prior to buying or selling an option, a person must receive a copy of Characteristics and Risks of Standardized Options. Copies of this document may be obtained from your broker, from any exchange on which options are traded or by contacting The Options Clearing Corporation, investorservices@theocc.com.