Allegion Public Ltd. (ALLE) is an Irish company that manufactures and sells mechanical and electronic security products and solutions worldwide.

The company’s products include locks, locksets, electronic security products and access control panels, and other door and window products.

The products include commercial and residential product lines. Allegion is headquartered in Dublin, Ireland and was incorporated in 2013.

Allegion ranks very highly in the efficiency measures, but the return on equity is off the charts.

I checked the Wall Street Journal, Investor’s Business Daily and Yahoo Finance and got three different numbers (329.9%, 466.4%, 128.7%), but all three are huge regardless of which one is most accurate. 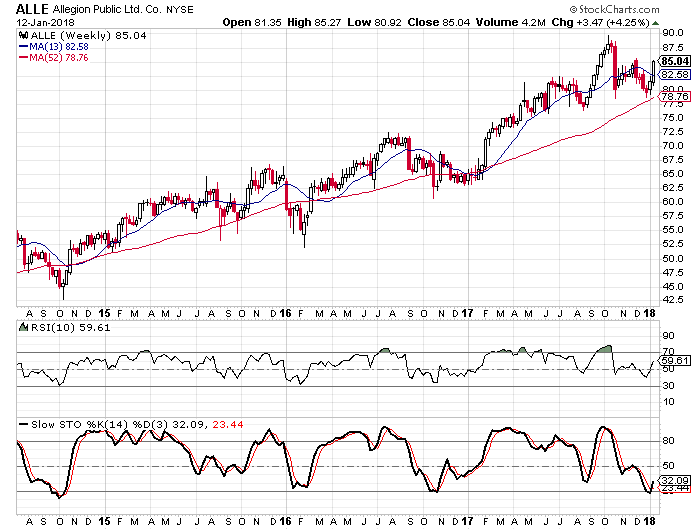 On the chart we see that the stock recently pulled back and hovered just above its 52-week moving average.

This took the weekly stochastic readings down to their lowest reading since the fourth quarter of ’16.

In the last three instances where the weekly stochastic readings have gotten anywhere close to oversold and then reversed, the stock has rallied nicely over the ensuing nine months.

We see that the upward move over the last two weeks caused the stochastic readings to make a bullish crossover.

Suggested strategy: Buy ALLE with a maximum entry price of $87.50. I would set a target of at least $110 in the next nine months, for a target 29% potential return from current prices. I would also set a stop-loss at $75.