On Thursday, the East Coast braced for “bomb cyclone” Grayson.

My best friend, a lifelong Maryland resident, wrote me: “100 eggs, 15 gallons of milk and 13 loaves of bread. We also have 100 pounds of salt… We’re fully prepared for our less than 1 inch of snow!”

Despite the country screeching to a halt because of a snowstorm, the broader markets continued to rally to new heights.

The Dow Jones Industrial Average topped 25,000. Hats were made signifying the milestone.

But underneath this good time, one sector was battling to gain control. Devastating losses piled up.

Losses triggered by a bomb going off on the East Coast…

On January 1, recreational pot use became legal in California.

Dispensaries met the new year with long lines of patrons. For them, it was the busiest day on record. And businesses saw sales bumps that exceeded their wildest expectations.

News cameras caught all the happy action. Sure, I didn’t understand why some of the customers were hugging each other like some great enemy had been defeated… but whatever.

This sparked renewed interest in marijuana from investors across the country.

In a move reminiscent of the recent blockchain boom, the eager beavers went out and bought anything marijuana related.

One of our researchers sent me a note saying Google searches for “weed” and “cannabis” that day exceeded the volume of searches on April 20 – the unofficial marijuana smoking holiday.

In fact, the last time queries for “weed” and “cannabis” were this high was November 9, 2016 – when everyone was Googling to see if California voters had legalized recreational cannabis use.

High on the prospect of weed profits, investors plowed into the sector. 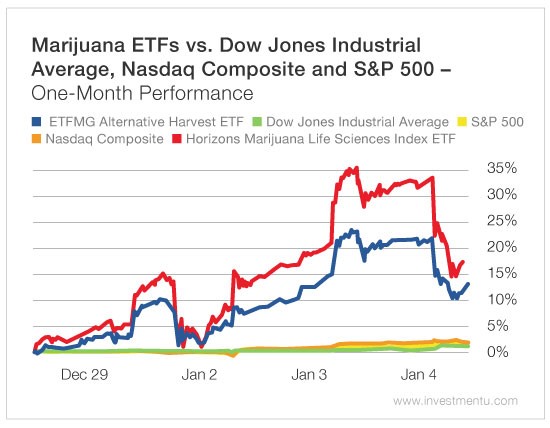 The Horizons Marijuana Life Sciences ETF (TSX: HMMJ) – which holds 20 marijuana-related companies – shot up as much as 35% between December 28 and the close on January 3.

The ETFMG Alternative Harvest ETF (NYSE: MJX) – which switched in December from Latin American real estate to cannabis companies – shot up as much as 23%.

At the same time, the Cannabis Stock Index, made up of 75 companies, surged 26.8% higher.

Even in my newsletter, Oxford Resource Explorer, our Canadian marijuana positions shot up as much as 72.6% during just that five-day span. And we don’t recommend penny stocks.

Investors were blitzed about the possibilities.

They didn’t even pay attention to the marijuana market last year, even though we had a fantastic run as we waited for the mainstream to “get woke” to what was on the horizon.

We’re talking about a potential $23 billion market by then.

Plus, they’ll be joined by Maine and Massachusetts later this year.

But I still don’t believe in U.S. pot stocks. And Thursday demonstrated why.

A Dose of Reality

Marijuana is legal in some form or another in 29 states.

But it’s still considered a Schedule I drug at the federal level. That means, in the government’s eyes, marijuana is as dangerous as heroin.

This is the major red flag that keeps me from investing in U.S. pot stocks. It was compounded when Trump won the White House and brought on board Jeff Sessions as his attorney general.

On Thursday, Sessions announced he would rescind the Obama-era policy that allowed marijuana legalization to expand. Under the old rules, federal authorities would avoid prosecuting an individual for offenses legal under their state’s marijuana laws.

But now, federal prosecutors in each state will determine how aggressively to enforce federal marijuana laws – regardless of what the state has to say about it.

This was the bomb that shook the entire marijuana industry.

And that’s the massive price drop in the chart above.

Based on the news, Nevada’s Cannabis Sativa (OTC: CBDS) plummeted 30%.

This is the exact reason why I’ve warned against investing in U.S. marijuana companies.

Investors are taking on undue risk due to that federal-level distinction.

The fact of the matter is there are much more attractive markets in Australia, Brazil, Canada, Chile and the European Union. In these markets, the industry has support at the federal level.

The global marijuana market is expected to be worth $55 billion in a few short years. There’s even a burgeoning export market that investors can tap into.

And though shares of these international companies enjoy updrafts from events like the California legalization, their businesses aren’t impacted by a U.S. crackdown.

Risk-averse investors who want exposure to what will be the story of 2018 should be focused on international marijuana companies that have negligible exposure to the U.S. market. The growth overseas can’t be overlooked… nor should the risks of owning shares of U.S.-focused pot stocks.