With 2018 just over a week old, many investors will have set about rebalancing their portfolios for the year.

Don’t worry… this isn’t another asset allocation article that you can find anywhere. Everyone knows you should have a mix of stocks, bonds, precious metals, and cash.

The weighting of each class is largely determined by key factors like your age, financial situation, and risk tolerance.

But among those investments, you should always diversify among both domestic and foreign stocks (including developed and emerging markets), market cap, sector, industry, and dividend-payers.

But the tricky part often comes when deciding how much risk to take on with individual stocks.

So I’m going to give you two companies that offer both safety and more growth for a little extra risk. 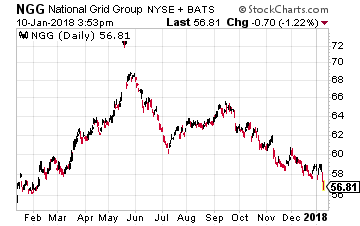 As “safe and steady” stocks go, they don’t come much better than utilities.

After all, we all need water, electricity, and gas.

If you’re looking for guaranteed repeat business, look no further.

In this area, I’ve picked out National Grid.

Based in London, England, you get a two-for-one deal right off the bat.

Not only is this a safe, dividend-paying utility, it checks the “diversify abroad” box, too.

The company distributes electricity and natural gas to homes and businesses across the United Kingdom – and based on what my family back home pays for those services, compared to what I do in the United States, it’s a lucrative business!

The firm is split into three areas:

Let’s turn to the financials… and remember that “lucrative business” I mentioned? Well, how does a net 51% profit margin grab you? The industry average is a paltry 5%.

As for the dividend, National Grid pays a healthy $2.91 per share annually (5% yield). 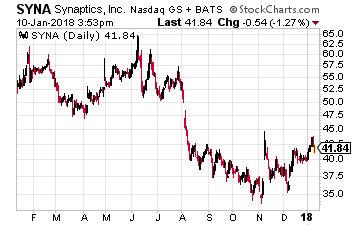 As I mentioned last month, of all the sectors in the S&P, technology enjoyed the biggest rise in 2017.

I also mentioned that the strong rise had triggered inevitable bubble talk.

But what I said a month ago is still true today: Don’t believe the hype.

Last month, I gave you semiconductor company Skyworks Solutions (Nasdaq: SWKS) as a stock consider, given our addiction to mobile devices and the rise of the internet of things.

But what about stuff you can literally touch? Namely, the screens and fingerprint sensors on phones and tablets, plus touchpads on computers?

In this area, you probably touch Synaptics’ products yourself. For example, its ClearPad product provides touchscreen interaction on the iPhone and Galaxy. And the Natural ID fingerprint sensor is used in smartphones, tablets, and PCs. As LED and OLED displays and fingerprint sensors continue to grow, so should Synaptics’ business.

The company is also behind TouchPad – the touch-sensitive pad that allows you to move the pointer/cursor on your PC – and ClickPad, which (no surprise here) enables you to click on things. Also within TouchPad is the company’s SecurePad fingerprint sensor.

And a few weeks ago, Synaptics announced that it’s begun mass production of Clear ID FS9500 – a new in-display fingerprint scanning technology that “allows users to securely unlock the device in situations including while it’s sitting on the table, at any angle, or while in a car mount.”

Smartphone manufacturer Vivo has adopted the innovation and will introduce it in its new phones.

This gives Synaptics a crucial first-mover advantage over Qualcomm, which will launch in-display fingerprint-scanning technology of its own this summer.

The potential headwind here is if the smartphone industry begins to shift more towards facial recognition technology over fingerprint scanning – led, of course, by Apple and its Face ID.

However, the fingerprint sensor market will still grow by more than 30% between 2016 and 2020. And Synaptics CEO Rick Bergman says its Clear ID technology is safer, more secure, more convenient, and twice as fast as 3D facial recognition.

That being said, Synaptics shares have endured a rough couple of years, losing 33% in 2016 and another 18% over the past year.

However, it’s addressing this by expanding beyond touch and fingerprint technology. It’s extremely bullish on the booming internet of things (growing at 15% per year over the next five years, according to IDC) and voice-enabled technologies – as evidenced by its acquisitions of Conexant Systems and Marvell Technology’s multimedia business last year.

While overall margins remain pretty thin, the company has hiked its revenue forecasts for those acquisitions. The mission now, according to Bergman, is for the company to bring the same level of voice technology accuracy in the home (where it’s partnered with Amazon on the Alexa product) to the road – by making it a must-have interface while driving. The company recently said it will quadruple its voice revenue in 2022 – up from its previous 3x estimate.

Overall, Synaptics’ PEG ratio of 0.8 indicates an undervalued company, relative to its earnings growth… its forward P/E of 9.3 is well below the S&P 500’s 25… and its 0.6 beta shows that it’s actually less volatile than the market, too.

To me, this looks like a company that’s recognized its shortfalls – and is addressing them through smart acquisitions and rapidly growing voice technology and the IoT. This is a longer term play and I think shares are poised to rebound and begin clawing back its recent losses.