It’s an indicator that has predicted the end of every stock market boom over the past 30 years. I’m certain it will predict the end of this boom, too.

I will show you exactly what it is today. It’s simple to follow. And it has been stunningly accurate.

Today’s indicator does just that. It predicts recessions, well in advance.

The indicator is straightforward. It shows interest rates… specifically, the short-term interest rate that the Federal Reserve artificially changes (compared with most other interest rates, which are set by market prices and not controlled by anyone).

But the Fed won’t keep rates low forever. In fact, it has already started raising rates in recent years.

This, by itself, is not a bad thing. But if the trend continues, the outcome could be ugly.

You see, the folks at the Fed have caused the last three recessions – and the last three stock market peaks – by raising interest rates artificially higher than “normal.”

Here’s exactly what you need to know… 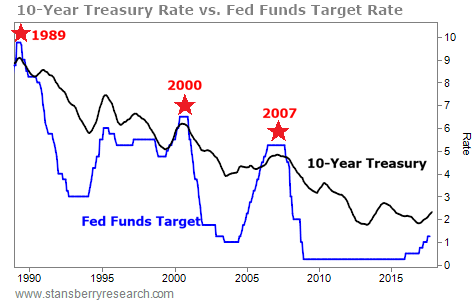 The Fed is responsible. It caused the recessions and the stock market busts by artificially raising interest rates too high.

So how close are we to this happening again?

The short answer is, not very close…

It could be as late as 2019 or even 2020 before the Fed’s actions cause a recession and stock market bust.

Here’s a look at the same chart with those economists’ future estimates for short-term rates built in. (The estimate of the long-term rate is my own estimate.) 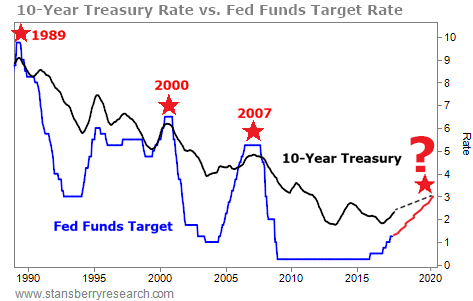 If the chart above is “about right,” then it means some great things for us as investors.

This chart has called every recession and major stock market peak over the past 30 years.

In short, if this idea proves right again, then the exact end of the bull market will happen when short-term interest rates rise above long-term interest rates. (That’s the moment when we should dramatically change our investments to be more risk averse.)

We are not there yet. Based on this, the current bull market could go on for years.

Don’t panic and sell just because stocks have had a historic run. We still have plenty of time to stay invested in U.S. stocks. Take advantage of it while you can!