This situation could eventually lead to a bubble. But today, it’s creating a huge opportunity for investors. Let me explain…

Since the end of 2010, Japan’s central bank has increased its holdings of Japanese exchange-traded funds (ETFs) by 113,000%.

You can see it on the chart below… 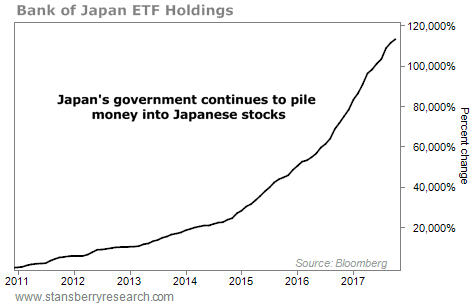 The numbers are just staggering… The Japanese central bank now owns more than 16 trillion yen worth of Japanese ETFs. (That works out to about $140 billion in U.S. dollars.)

For a frame of reference, more than half of the total assets in Japanese ETFs are owned by the Japanese central bank.

And the pace isn’t slowing down. Instead, it’s speeding up…

This year alone, the Japanese government has added $46 billion in ETFs to its portfolio – and we still have two months of data left to report for the year.

The headline to my story was “Little-Known ‘Mr. K’ Just Set Up the Best Trade of Our Lives.”

“Mr. K” is Haruhiko Kuroda – the head of Japan’s central bank. He’s afraid Japan will backslide into deflation… And he has the power to prevent it from happening.

He’s committed to buying Japanese stocks. And he’s also committed to keeping interest rates at zero for an EXTREMELY long period of time.

So this gives us an incredible tailwind in Japan… zero-percent interest rates for the long run, AND a government that is committed to buying stocks. That is a recipe for an eventual stock market bubble.

Subscribers who followed my advice a year ago and bought the WisdomTree Japan Hedged Equity Fund (DXJ) are up 26%.

But you haven’t missed it yet…

U.S.-traded Japan ETFs actually had a net OUTFLOW of cash in 2016. And this year, the net flow in Japan is basically flat. In short, Americans don’t care… yet.

That means this trade has more upside ahead.

Long story short – this Japan setup is as good as it gets. Interest rates are at zero for the long run, and you have a multibillion-dollar tailwind in the stock market.