The markets have chugged along to new all-time highs this year.

You hear about it every day on multiple financial news networks.

Those are great numbers. And the most hated bull market in history continues to stampede along despite an unending array of obstacles.

At this point, a lot of investors are trying to zero in on opportunities that don’t seem especially frothy or overvalued.

Today I’m going to show you an opportunity that is lagging well behind blue chips and large cap technology stocks. 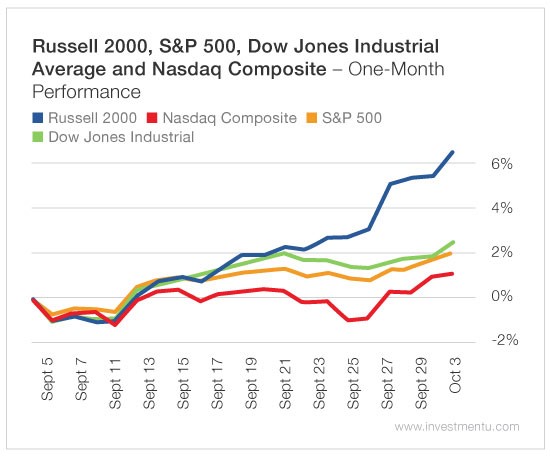 In fact, since September 5, the Russell 2000 is up more than 6.4%. That’s three times the performance of the Dow, S&P and Nasdaq during that same span.

Here’s the shocking part… In mid-August, the Russell 2000 had negative returns for the year.

The September Surge in Small Caps Is Just the Beginning

Small cap stocks are often considered the front line of the domestic economy.

They’re smaller companies, so they tend to rely more heavily on domestic markets than overseas ones. The upside to this is that these companies are less exposed to bullish moves in the U.S. dollar. And we’ve seen the dollar post a significant run higher recently.

And as we get into prime consumer spending periods of the year, small caps become a focus (as you’ll soon see).

But recently, another issue has come into play for small caps.

It’s the possibility of tax reform… or, at the very least, a tax cut.

Last week, the White House unveiled one of the most sweeping tax overhaul plans in decades. One of the key pieces is lowering the corporate tax rate to 20%.

This triggered a 3% jump in the Russell 2000 to close out the week. Again, that’s more than double the growth of its large cap index counterparts.

The reason is simple: Small caps will be the biggest beneficiaries of tax reform. On average, their median effective tax rate is 31.9%. By contrast, the average effective rate for larger corporations is closer to 20%.

Now, to be fair, the proposed tax plan is only a handful of pages long at this point. It’s essentially a set of guidelines. And some Congressional analysts say there are more questions than answers as to how it will be passed or implemented.

This is what investors are digesting. And it’s been rocket fuel for the move in small caps.

Why Investors Must Ignore This Outdated Advice

August and small caps aren’t the best of friends.

But that’s really nothing new…

But I think small caps will have a stronger close this year than any other group of stocks.

But you don’t have to rely on my opinion here. History and data back me up.

And if you’re buying small caps in January, then you’ve missed out on the best two months of the year for the group… 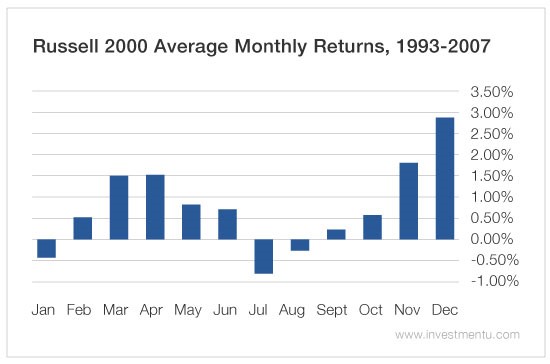 And as we can see from the chart, since 1993, December has been far and away the best month for the Russell 2000.

January, on the other hand, is one of the worst.

That means that now is the time to be looking at small caps. The fourth quarter – October, November and December – include two of the best months for the Russell 2000.

In fact, over the past 25 years, the Russell 2000 has averaged a nearly 3% gain in the month of December alone. During that span, the index has posted a monthly loss in December only four times.

That’s what a good month for an index looks like.

For investors looking to close out the year strong, small caps have historically been the best bet. Over the past 25 years, November and December have been the best months by far for these stocks. So if you’re looking for a lot of upside – and a group of stocks lagging blue chips – there’s no better place to be this holiday season.