It’s a not-so-fun fact about investing… Stocks often soar further than is reasonable on good news, and they fall further than imaginable when news is bad.

But this fact has a positive side. You can profit from these overreactions. They often lead to major opportunities.

But history says the market is overreacting… And the reversal could mean gains of 17% over the next year.

The real harm inflicted on the people in these areas is the obvious tragedy of these storms. But hurricanes cause massive economic damage as well.

These days, a major storm can easily cost tens of billions of dollars. And who pays the bill?

Much of the loss falls on P&C insurers… And the sector absolutely tanked in the wake of these storms, which we can see in the PowerShares KBW Property & Casualty Insurance Fund (KBWP). Take a look… 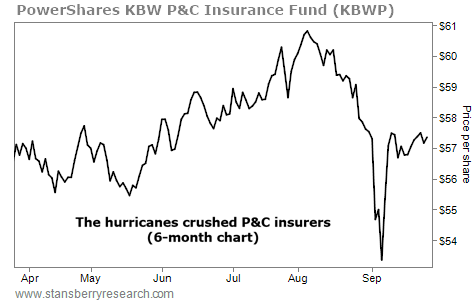 The sector fell double digits in just a few weeks. But the reversal has already started, and history says big gains are likely from here.

The RSI measures an investment’s recent gains and losses. It signals when something is either overbought or oversold… which means a reversal is likely.

The P&C insurance sector hit an RSI of 22 earlier this month. That signals extremely oversold conditions… And it means big gains are likely to follow.

The table below shows what similar oversold levels have led to in the past, going back to 1989. Take a look…

P&C insurers tend to soar after hitting oversold levels like we saw recently. Similar RSI levels have led to 9% gains in three months, 12% gains in six months, and 17% gains over the following year.

It’s not unusual for P&C insurers to sell off after a major storm. But if the selling is overdone, it presents an opportunity to buy.

The sector is already recovering. It’s up more than 7% since early September. But history says that’s just the beginning.

These storms are devastating for our communities. But the financial markets are overreacting, based on history.

We could see a sustained rally from here. That recovery could result in double-digit gains over the next year… And shares of KBWP are a simple way to make the trade.