Today, we’re showing you a way to profit from Amazon’s explosive growth while earning income from dividends with this top REIT…

They’re among the highest-yielding stocks you can buy, with an average dividend yield more than four times that of the S&P 500.

Most REITs lease shopping malls, hotels, or office buildings to other companies.

According to Money Morning Resource Specialist Peter Krauth, Amazon’s demand for this REIT’s data centers will soar as Amazon keeps growing the biggest area of its business…

Here’s Why Our Top REIT Will Benefit from Amazon

Amazon Web Services (AWS) will be largely responsible for our top REIT’s rally in 2017 and 2018. AWS is Amazon’s cloud storage business, meaning it processes terabytes of website traffic and video streaming for firms like Netflix Inc. (Nasdaq: NFLX).

Since it was rolled out in 2006, AWS has quickly become the most dominant cloud service provider in the world… 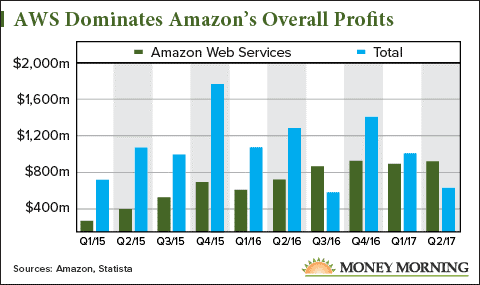 Last quarter, AWS’s revenue of $4.1 billion made up 11% of Amazon’s revenue across all businesses. Not to mention, AWS’s profit of $916 million beat the company’s overall profit of $628 million.

“The rest of Amazon could hemorrhage money, and indeed, sometimes it does,” Peter said. “AWS actually represents more than 100% of profits, while it’s just 10% of revenue.”

Both Peter and other analysts see AWS’s control of the cloud market only growing larger over the next five years. Tech researcher Wikibon forecasts AWS raking in revenue of $43 billion by 2022 – more than triple the $12.2 billion earned in 2016.

All of this cloud computing demand will come from the streaming revolution. Peter’s research shows that global video traffic – including TV and movie streaming – could surge 300% by 2021.

“This streaming revolution has spawned a whole new business sector,” Peter said. “And the companies that facilitate the flow of streaming traffic find themselves in the sweetest of spots.”

That’s why Peter’s top REIT pick today is a great way to profit from AWS’s success.

The REIT offers a service with Amazon called AWS Direct Connect, which lets the REIT’s customers – often IT companies – establish a private, direct connection between the REIT’s data centers and AWS. According to Amazon, this can reduce the customer’s network costs.

As AWS continues to grow, more IT companies in need of data storage will use this AWS service. This will lead to more demand for our REIT pick’s data center locations.

The REIT is also a way to profit from Amazon without buying shares of AMZN. While AMZN stock currently costs at a whopping $940.56 per share, our REIT pick costs much less, at $113.29.

And if you’re looking for a stronger dividend, Peter’s REIT recommendation easily beats AMZN. It offers a quarterly dividend of $0.93 per share (3.28% yield), while AMZN doesn’t pay a dividend at all.

This Is the Best REIT to Buy Before 2018 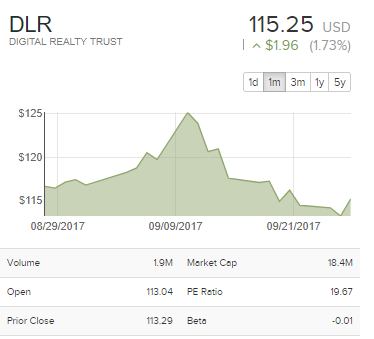 Digital Realty owns and leases data centers to IT companies. These IT firms use them to store computer servers that manage video-streaming traffic, data storage, and cloud computing. The firm has 133 data centers in North America, 30 in Europe, and seven in Asia.

That increase in Digital Realty’s data center portfolio makes it a more dominant competitor in the “digital REIT” market.

“Digital Realty benefits from all the positives that DuPont had on its own,” Peter said. “The larger size helps Digital Realty to better compete within its sector and should produce some synergies and economies of scale.”