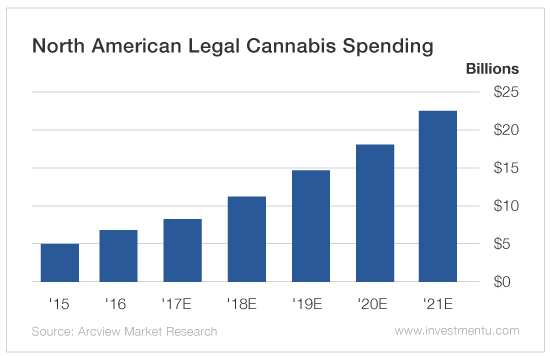 The cannabis market is still young and faces many legal hurdles. But that hasn’t stopped the money from rolling in…

That figure is expected to rise another 22% this year to about $8.2 billion. And by 2018, cannabis spending should top $11 billion.

That growth is being driven by a wave of legalization initiatives that have opened up new markets for the budding industry.

Though the industry is gaining momentum, a major roadblock remains…

Cannabis is still illegal on a federal level.

Under the Controlled Substances Act of 1970, cannabis is classified as a Schedule 1 substance, putting it in the same category as heroin and LSD.

However, there’s a debate over the validity of this classification. In fact, new legislation was recently introduced that would effectively “reschedule” cannabis as a Schedule 3 substance.

That would put it in the same category that contains combination products such as Vicodin and Tylenol with codeine, which are commonly used under medical supervision to treat pain.

Of course, some advocates want to go further and legalize it across the board. But until that happens, most cannabis spending will continue to take place in the shadows…

That means the illegal market is SIX times larger than the legal market is. That’s a market ripe for expansion when, not if, cannabis is fully legalized.

But this brings up an important question…

Just how large is the medical cannabis market?

The Future of Medical Cannabis

Many people think the marijuana industry is driven by hippies and college students. However, most of the legal sales so far are for medical use.

Cannabis-based treatments are often used to treat a wide range of conditions, including back pain, sleeping disorders, glaucoma and depression.

Cannabis can also be used to treat multiple sclerosis.

GW Pharmaceuticals (Nasdaq: GWPH) is at the forefront of plant-based cannabinoid treatments for neurological conditions. Its flagship drug, Sativex, treats the spasticity symptoms of multiple sclerosis.

The drug has already been commercially licensed in 16 countries outside the United States and has regulatory approval in an additional 12 countries.

Another one of GW’s cannabis-based drugs, Epidiolex, is designed to treat Lennox-Gastaut syndrome and Dravet syndrome – two rare forms of epilepsy. And so far, it’s been proven to drastically reduce seizures in patients, compared with the results from those taking a placebo.

But these treatments reflect a small portion of the medical cannabis market.

According to the market research firm New Frontier Data, North American sales for the medical cannabis market alone will reach $24.5 billion by 2025.

That means this market is set to grow 400% within the next several years.

Most Americans today support progressive cannabis legislation. You might even say support is at an all-time “high”…

According to a recent CBS News poll, around 61% of Americans think cannabis should be legal… 88% think medical cannabis use should be legal… and 71% don’t want the federal government to interfere in states where it’s already legal in some form.

Suffice it to say, the tides are shifting.

Now it’s just a matter of when, not if, cannabis will be legalized throughout the U.S.