The video-streaming company Netflix (NFLX) has been on a tear. Its stock has risen 210% in the last four years. It trades for 70 times earnings.

The company sports that lofty valuation despite facing competition from other services – including Internet giant Amazon’s (AMZN) streaming service. It spends a half billion dollars a year on advertising.

At such an inflated price, Netflix shares can’t go much higher.

It doesn’t take a financial wiz to see that. Should you sell? Should we short the stock?

Alas, those Netflix stats were from the end of 2012… not today.

Since then, Netflix has risen to trade at 218 times earnings.

Its number of subscribers has more than doubled in five years, from 27 million to 104 million.

Revenues tripled, and earnings per share have grown 20 times over.

Shares of Netflix have returned 1,255% over the period… even when they looked like they “couldn’t go higher.”

The point here is a lesson learned by many investors the hard way: Never short a stock based on valuation.

You can place a bet that a stock will fall – this is known as “shorting” – because its business is about to die, or in rare cases, because you’ve unearthed fraud.

But if you think a stock will fall just because its price is high, you’ve got a good chance of getting burned…

A study of more than 400 short positions held by activist investors showed that the ones made due to alleged fraud fell an average of 30% – making a profit for shorts. The ones based on valuation rose 3%, leading to a loss.

Valuations don’t have a ceiling. They’ll always go higher than you think.

As respected hedge-fund manager David Einhorn puts it, “[We refuse] to sell short anything just because its valuation appeared silly. We reasoned that twice a silly valuation is not twice as silly. It is still just silly. Kind of like twice infinity is still infinity.”

I’m not in the business of making short bets. But I bring this up because so many people expect a market crash for the very same reason – valuation…

The S&P 500 Index trades at about 21 times earnings today. That’s high, no doubt. And if you turn on CNBC or other media, the bears are out in force calling for the next big crash.

However, a high valuation isn’t enough to turn the market.

The underlying factors are simply too healthy.

The most recent gross domestic product (GDP) growth number came in at a booming 3%. We know that unemployment is low at 4.37%, and the economy is creating around 200,000 jobs each month.

When you turn to businesses, per-share sales for the companies in the S&P 500 keep rising to new highs… and so do earnings per share. 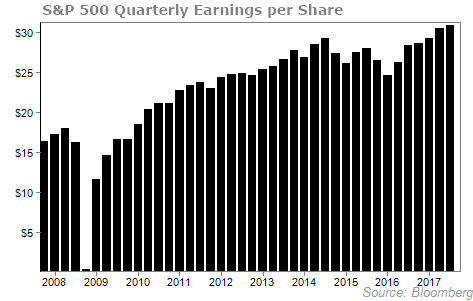 Bears point out that companies are buying back shares, making the growth less impressive. But when I’m out in the world, I see full trains, packed planes, busy restaurants, and folks out shopping.

Earlier this year, I spoke with a contractor who said he could start a project for me in a month. But I put off the work. Today, I can’t get him, or anyone else, to show up for at least six months.

The economy is not on the verge of a collapse. The stock market is going up and up because lots of investors see what I see.

From 1990 to today, on a quarterly basis, stocks have spent about 30% of the time with a valuation higher than today. The peak in the 1990 bull market was 26. In 1999, it peaked at 29. (The peak in the depths of the Great Recession was a little different – it spiked because earnings fell, not because stock prices rose). 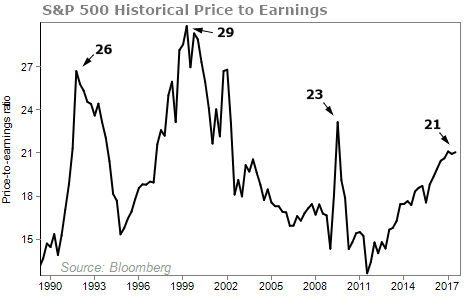 To match those peaks, stocks could still rise another 23% or 38%, respectively.

And given that earnings are rising, stocks can rise even further to meet those peaks.

Now, we don’t mean to say the market will make that sort of gain before it falls… We just don’t make those sorts of predictions. For that matter, the rising earnings we’re seeing today could help valuations normalize.

Either way… valuation alone is not a sign of a market crash.