There was news out last week about electric cars that will change the industry forever. And it was bigger than anything that Elon Musk has ever said.

What could possibly be more important than Elon Musk when it comes to electric vehicles, you ask? That’s easy – the world’s largest vehicle market – China.

Comments were published by Xinhua (China’s official news agency), from the vice-minister of industry and information technology, Xin Guobin, that the government will likely announce the future date when production of internal combustion engine vehicles will be banned.

In going down this road, China is following the path already taken by countries like France and the U.K. that have prohibited the manufacture of such vehicles, beginning in 2040.

China’s move is so important because of its size – it manufactures the most vehicles, with about 28 million vehicles produced in 2016 according to data from the International Organization of Motor Vehicle Manufacturers.

And it is already the biggest electric car market, with 507,000 such vehicles produced domestically last year, a rise of over 50% from the prior year.

And yet, still only one in five Chinese citizens own a vehicle!

An official announcement of a ban on internal combustion vehicles will give an almost unimaginable boost to the global electric vehicle industry. This news already set off a frenzy among investors worldwide.

So let’s ‘imagine’ a bit… I’m going to reveal to you the best ways to play this milestone for the electric vehicle industry. And it does not involve buying Elon Musk’s Tesla Motors (Nasdaq: TSLA). 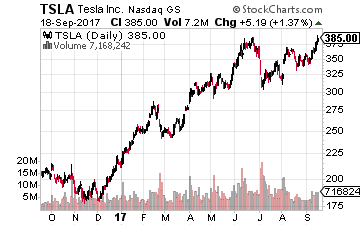 I was almost amused at the reaction of some U.S. investors.

They bid up the price of Tesla by more than 10% last week after the news broke.

Tesla will be lucky to get even a tiny sliver of the Chinese market.

It should not be surprising to you, but the companies that will gain the vast majority of market share will be Chinese companies.

There are a number of Chinese companies already in the electric car race. One example is Volvo, which is controlled by the parent company of Geely Automobile (OTC: GELYY), will introduce its first 100% electric car in China in 2019. 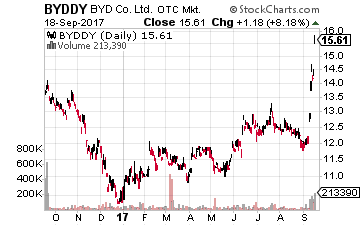 Leading the race already in China is BYD (OTC: BYDDY), of which Warren Buffet owns 8.25%.

It is currently the world’s largest electric car maker and produced nearly 47,000 electric and hybrid vehicles in the first seven months of 2017.

And it is also the world’s biggest producer of electric car batteries in the world.

While Tesla investors are breathlessly awaiting the company’s Gigafactory to crank up annual production of batteries to one gigawatt, BYD passed that mark more than three years ago. BYD is bringing online an additional four gigawatts of battery-making capacity by year’s end. That will make its annual battery output 12 times larger than Tesla’s!

So its stock nearly 20% move up in Hong Kong is a bit more justified than Tesla’s, although it is probably too much too soon. By the way, Buffett’s investment into BYD in 2008 has now grown more than sixfold.

You may wonder whether all the hype surrounding the future of electric vehicles is justified. I believe it is – the only disagreements are as to the timing of the changeover to an electric future.

Research from Bloomberg New Energy Finance (BNEF) forecast that falling battery costs will make electric vehicles cheaper than conventional ones by 2025. Batteries currently account for roughly 50% the cost of an electric car, but BNEF says these costs will fall 77% by 2030.

The automaker Renault also believes the cost difference between the two types of vehicles will be negligible by the mid-2020s. That could mean there are more than 37 million electric vehicles on the road in 2025, according to Navigant Research.

Looking even further ahead, BNEF predicts there will be 530 million electric vehicles traveling on global highways in 2040, a third of the overall market. Even OPEC says there will be 266 million such vehicles by then, having quintupled its forecast number over the past year.

Of course, all of these forecasts are contingent on one thing – the falling price of batteries and cars.

That brings me to that best path of investing for you in this electric future… the electric car revolution cannot happen without the necessary commodities that go into the making of electric cars, and most importantly – the batteries.

Thanks to rising production of electric vehicles, there will increasing demand for metals and minerals such as copper, aluminum, nickel, manganese, graphite and certain rare earths.

Let’s look at copper, for example. Electric cars contain about three times more copper than a regular vehicle. That’s because copper is needed in these vehicles’ motors, inverters and charging points as well as in the lithium-ion batteries. And don’t forget about all those charging stations that will be needed.

Copper recently hit a three-year high, rising 18% for the year at one point. While a pullback is underway, rising demand for copper from electric cars meeting dwindling supplies will mean higher prices going forward. New mine supplies will be needed, perhaps as much as 20 million metric tons by 2025. That much added supply is unlikely considering the long lead times (a decade or more) it takes to bring a copper mine online.

Another example of commodities needed for electric vehicles are two rare earths – neodymium and praseodymium – whose prices have over 50% so far this year. That’s because some electric carmakers, such as Tesla, are choosing to use rare earth-based permanent magnet motors rather than induction motors because they are lighter and more powerful. Argonaut Research says such usage will cause demand for these two rare earths to soar by 250% over the next decade. 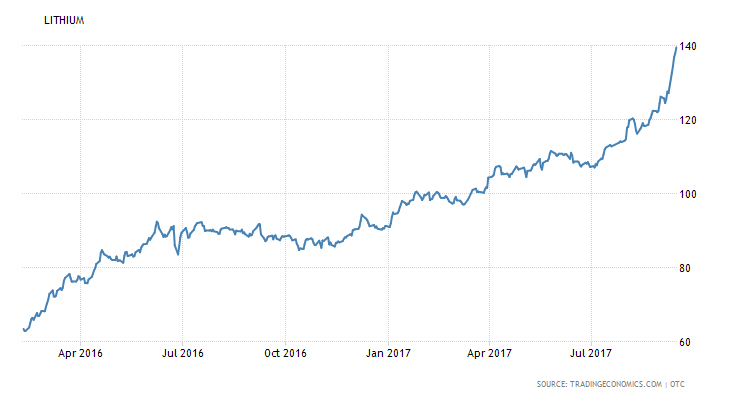 That hottest of all commodities sector centers on the key elements needed in lithium-ion batteries – lithium and cobalt (needed for the cathodes). These commodities account for roughly 60% of the cost of a lithium-ion battery, so says Simon Moores of the specialized consultancy, Benchmark Mineral Intelligence.

And these prices are soaring, according to data from Benchmark. Since 2015, lithium prices have quadrupled and cobalt prices have doubled. The price gains, especially for cobalt, have only accelerated this year.

These gains are highly likely to continue. Another consultancy, Roskill, forecast demand for lithium will soar fourfold by 2025. I’m sure that’s why the London Metal Exchange is considering starting to trade a lithium contract. And cobalt demand will also soar.

There are intricacies to these specialized markets. For instance, lithium can be obtained either from lithium brine deposits, which are found in salt flats, or it can be mined from spudumene lithium hard rock deposits. In general, brine is a lower-cost asset to develop. But then there are other considerations such as the richness of the find and its location.

Then after mining, there are specialized types and multiple grades of lithium and cobalt that are needed for lithium-ion batteries. Some of these include lithium carbonate, lithium hydroxide, cobalt sulphate and cobalt hydroxide. 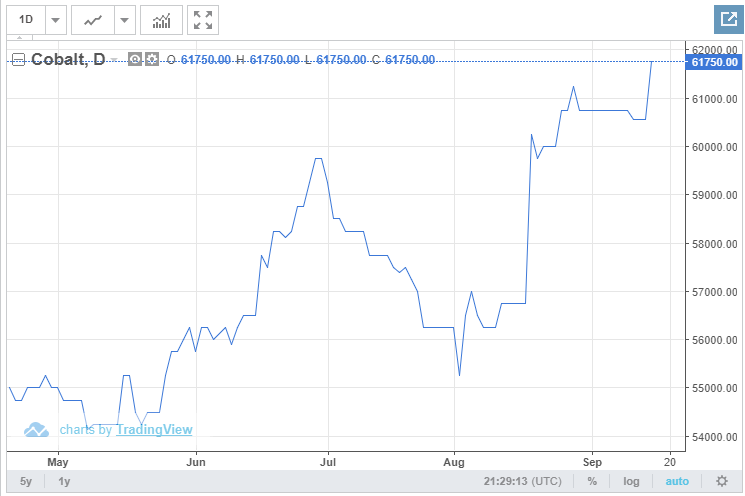 Investors almost got it right this past week when they poured money into the Global X Lithium & Battery Tech ETF (NYSE: LIT). Investors sent the price of this ETF up by 10.25% last week, pushing this year’s gain to 55.25%.

This is the right space to be in, but LIT is the wrong instrument. Its top position – 23.5% of the portfolio – is FMC Corporation (NYSE: FMC), which I would not touch with a 10-foot pole.

How would I play the electric car revolution?

I have no problem with owning the aforementioned BYD or even if you bought the company currently supplying Tesla with batteries, Japan’s Panasonic (OTC: PCRFY), which is up 45% year-to-date. Or even Wall Street’s favorite lithium stock, Albemarle (NYSE: ALB), which has jumped nearly 48% year-to-date.