There’s an old proverb that goes “The fish sees the bait, not the hook. Men see the profits, not the peril.”

This idea came to life in a conversation I had at an Investment U Conference a few years ago.

A gentleman told me that, a couple years back, a friend of his recommended he buy some stocks.

The one caveat? He needed to hold them for five years.

“So I bought one of those stocks,” he told me, laughing slightly. “And it hasn’t done so well.”

My first question – as it always is in these situations – was “Did you use a trailing stop?”

He shook his head. “I was supposed to hold the company for the next five years, so I didn’t think it was necessary.”

Now, I’ll pause here to say this: I am a product of the new millennium.

My investing life began during the dot-com crash, only to be followed a few years later by the financial crisis.

I know nothing but boom-and-bust cycles. And, as a result, I don’t fear volatility. Nor do I fear collapses or sell-offs.

A rally can’t exist without a sell-off or correction, and vice versa.

Sell-offs are my friends. They allow me to scoop up companies I’ve been eyeing at discount prices.

And rallies, when they come, are always welcome. But I always view them with suspicion – because I never know how long our relationship will last.

The goal is to get in, protect your profits, get out and move on.

Now back to my conversation…

The man told me the name of the stock he purchased: Enerplus Corporation (NYSE: ERF).

I pulled out my phone and pulled up charts for the company. Here’s what I saw… 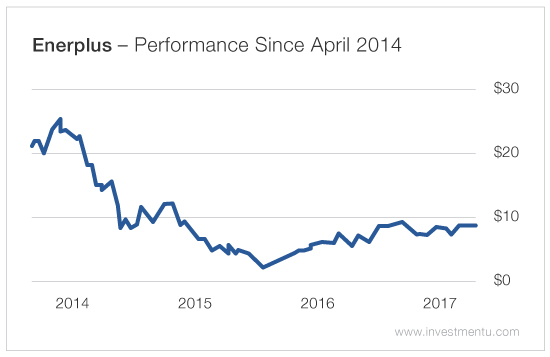 Not a pretty picture, is it? The only answer I could give was “I can’t tell you what you should do. BUT, in the future, you should absolutely use a trailing stop.”

I don’t know how much this gentleman invested in this company. But let’s say $10,000 to demonstrate my point. Let’s also assume he bought the stock at open on April 15, 2014.

The company pays dividends, but I’m not going to include them because of their small sizes.

Now let’s say instead of holding this position, he implemented a 25% end-of-day trailing stop (what we use at The Oxford Club). At the original purchase price of $21.02, his initial trailing stop would’ve been $15.77.

Using a stop loss would have also kept him from worrying for two years straight, the pressure steadily mounting.

I don’t want you to think I’m picking on this gentleman. In all honesty, I completely understand why he didn’t sell. Fact is, we are all less likely to hit the sell button on a loss than a gain.

That’s precisely why it’s so important to use stops. They completely remove emotion from the equation.

And who knows? Maybe over the next two years, Enerplus will gain 134%. (That’s what he’ll need to get back to his original buy price.)

It always amazes me that trailing stops are seen as a controversial strategy. At conferences, I always hear, “But what if it bounces higher after I’m bucked out of the stock? I’ll have missed out on that!”

That’s true. But it’s not the point.

The point is…What if your shares go even lower?

Trailing stops make sure you never find yourself in that position. That you never have to ask, “What should I do now?”