The Facebook Inc. (Nasdaq: FB) stock price is up 46% this year, but Facebook’s new tech innovation could push share prices even higher…

The answer lies in the fact that Facebook is now much more than a social media company.

And its latest push into augmented reality (AR) proves it…

According to an Aug. 18, 2017, Business Insider report, Facebook filed a patent application for its “smart glasses.”

The smart glasses will let people see virtual objects overlaid onto real world images, similar to how “Pokemon Go” players can use their phones to have virtual images of the characters projected onto real-world settings.

While AR and smart glasses may just seem like novelties now, Zuckerberg is actually getting ahead of the next tech trend…

You see, the technology will have more applications than just gaming, which will turn AR glasses into must-own items instead of simply a fun gadget.

For example, when you need directions, AR glasses could project a live map to follow in front of your face as opposed to staring down at your phone. Even more simply, AR glasses can allow you to take pictures, record videos, and stream live recordings directly from your perspective without having to wear clunky headgear.

And this technology will be mainstream soon. According to the BI report, the chief scientist for Oculus, the VR company Zuckerberg bought in 2014 for $2 billion, said AR glasses could start replacing smartphones in 2022. That’s just five years away. 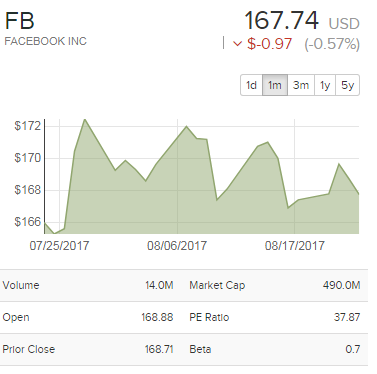 This forward-thinking innovation is part of why Facebook has grown into a $487 billion company.

And it’s not too late to profit from Facebook stock. There’s still time to make even more money from Zuckerberg’s genius…

But you could be bragging in the next three years…

Robinson was one of the few tech analysts who stood by Facebook while other analysts were slamming it. Knowing that Zuckerberg’s dorm-room creation would create great wealth, Robinson boldly pronounced on Nov. 13, 2015, that Facebook would trade for $250 per share by 2020.

When I caught up with Robinson, I wanted to see how he felt about his prediction, which has helped some of our readers make gains of more than 60% so far.

“There is no question in my mind at this point that Facebook will hit $250. The only question is when, and 2020 strikes me as a solid forecast at this point,” Robinson told me.

The readers who followed his advice back in November 2015 are on track to make profits of 140%. But if you didn’t listen to him then, that’s okay – there’s still time to make market-beating gains.