It’s one of the best investment opportunities outside of the U.S. today. And the upside potential is massive.

Our team is so bullish that several of us just got back from a trip to China last month. We held two one-day conferences in Beijing and Hong Kong with leading experts in China’s markets.

China isn’t a “buy anything” market.

While the overall opportunity is fantastic, a certain group of Chinese stocks is hitting multiyear lows. And it’s a group you want to avoid right now.

The first half of 2017 saw a major rally in Chinese markets… and I don’t want you to worry too much.

I believe we are still in the early stages of a long-term bull market in China.

But not all Chinese stocks are good buys today. It’s not a “buy anything” market.

We can see this through the ChiNext Price Index, which holds a basket of local Chinese small-cap stocks. The index has fallen off a cliff… and continues to hit new lows. Take a look… 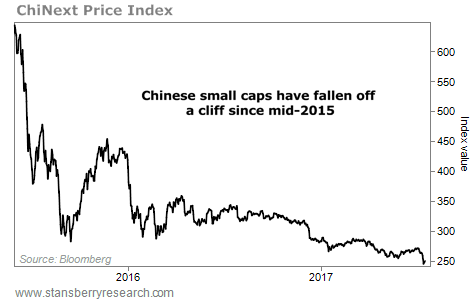 This is an ugly chart… The recent fall pushed the index to its lowest level since January 2015. 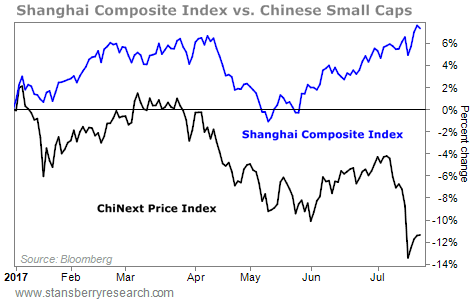 This chart teaches an important lesson… Not everything soars during a bull market. A rising tide doesn’t necessarily lift all ships.

So yes, Chinese stocks in general are having a fantastic 2017. And yes, I’m still extremely bullish on China today. But no, this is NOT a “buy anything” market.

Chinese small caps are having a terrible year, despite a boom in China’s larger companies.

Of course, Chinese large caps continue to soar. And I believe we are still in the early stages of a new bull market. Last month’s trip to China only made our team more excited about the long-term opportunity.

Today, the simplest way to profit is to buy the companies that are soaring… China’s largest companies. These are the Chinese stocks that are booming now. And as hundreds of billions of dollars start flowing into the Chinese stock market, nearly all of it will go into large caps – not small caps.

This is a major long-term opportunity. And I urge you to be a part of it now – by investing in China’s largest, most successful companies.