No one’s talking about it…

It hasn’t been in the news…

[ad#Google Adsense 336×280-IA]But the U.S. dollar has gone straight down this year. It has fallen almost 7% so far in 2017. And a falling dollar, in general, means other currencies are rising.

One currency in particular recently hit an extreme in negative sentiment, and is already on the move higher.

History says that’s a setup for big gains. The currency soared 25% in less than a year the last time we saw a setup this good. And we could be at the beginning of a similar move right now.

It’s not a hard rule… But the world’s major currencies tend to move the opposite on the U.S. dollar.

From 2014 through 2016, the U.S. dollar soared. And most global currencies fell as a result. Today’s opportunity was no exception…

At its peak in 2011, the Canadian dollar traded at a 6% premium to the U.S. dollar. But things have changed.

The Canadian dollar is down about 27% since then.

One U.S. dollar is now worth about 30% more than one Canadian dollar. The reversal has been dramatic, to say the least. And traders have piled in as a result.

You see this a lot in currency and commodity markets. Speculative traders begin chasing a trade after it has run its course.

They get bearish at exactly the wrong time… right when things are about to turn around.

That’s exactly where we are in the Canadian dollar right now. Speculative futures trades just hit their most negative level in history, based on the Commitment of Traders (“COT”) report. Take a look… 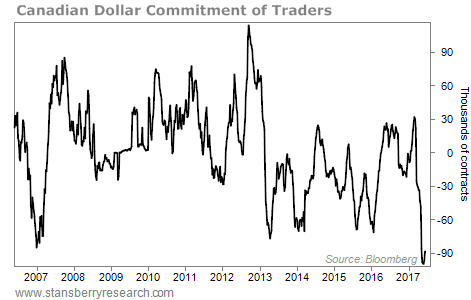 Regular DailyWealth readers know that the COT report is a great contrarian indicator. It tells us what real-time futures traders are doing with their money. These traders tend to get it wrong when they all make bets in the same direction.

When the chart is low, it means futures speculators are incredibly bearish. And as you can see, after years of poor performance, speculative futures traders have gone from bullish to extremely bearish on the Canadian dollar.

That’s a positive sign going forward. The last time negativity was near today’s levels was early 2007. The Canadian dollar went on to soar 25%-plus less than a year after that.

The simplest way to bet on a higher Canadian dollar is through the CurrencyShares Canadian Dollar Fund (FXC). This fund also jumped roughly 25% last time around.

We can’t know exactly how far the Canadian dollar – and FXC – will soar this time. But the U.S. dollar is falling… and speculators are overly bearish.

Last time, that led to a 25% rise. So the smart bet is on a higher Canadian dollar, starting now.