Amid the chaos of trading on Wednesday — with the Federal Reserve raising interest rates again, looking for another hike later this year, and hinting at the start of a balance sheet taper — energy stocks have been heavily offered.

[ad#Google Adsense 336×280-IA]This as crude oil, represented by the United States Oil Fund LP (ETF) (NYSEARCA:USO), moves under its low from last August to test levels not seen since the energy meltdown in early 2016.

It’s all pretty ugly and reflects an unwinding of two big tailwinds the sector had enjoyed over the past year: The OPEC production freeze deal and the post-election “Trump-flation” rally.

The former is being unwound amid evidence of a persistent global oversupply, bloated U.S. crude inventories, ramping U.S. shale production (at lower costs) and geopolitical strife between Qatar and Saudi Arabia.

The latter is being unwound by tepid economic data, a rollover in market-based inflation expectations, Fed tightening and a lack of legislative progress by the Trump administration.

As a result, the Energy Sector Select SPDR (ETF) (NYSEARCA:XLE), which is already down 15% from its December high to return to its mid-2016 trading range, looks vulnerable to a move back to its February 2016 support near $54. That would be an 18% decline from here.

Here are the top five energy stocks that look set to lead the way down. 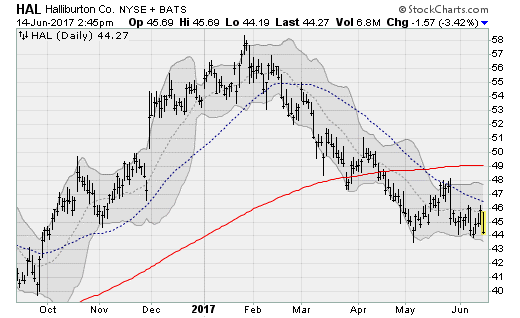 Shares of oilfield services provider Halliburton Company (NYSE:HAL) are moving down to test the lower end of their two-month trading range near $44. Already down more than 24% from their late January high, HAL look vulnerable to a breakdown to test the low from last September near $40, a 9%-plus move from here.

Services stocks like HAL are leading the decline here as the market prices in a reversal in the recent increase in U.S. shale activity as energy prices weaken. A slowdown in activity will hit the services stocks first (they are most exposed to rig count) before the exploration and production firms, many of which are hedged to insulate themselves somewhat from commodity price volatility. 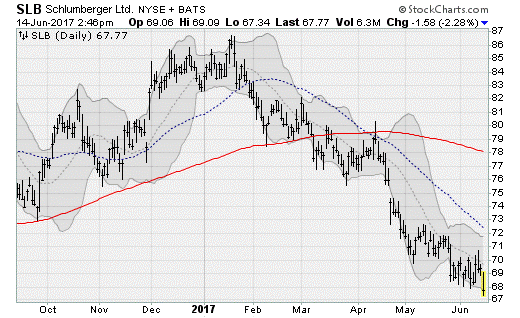 Oilfield services provider Schlumberger Limited. (NYSE:SLB) has already broken down and out of its two-month trading range, returning to levels last seen in February 2016.

The company will next report results on July 21 before the bell. Analyst are looking for earnings of 29 cents per share on revenues of $7.2 billion.

When the company last reported results on April 21, management noted that recent strong activity in North America would being offset by weakness internationally. 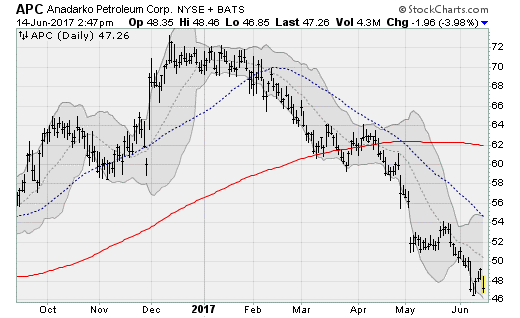 Anadarko Petroleum Corporation (NYSE:APC) shares look set to decline below the lows set earlier this month, capping a 35%-plus decline from the December high.

APC stock suffered a downgrade from Barclays on Wednesday, with analysts lowering their target to $42 (a 10%-plus downside) on valuation concerns and a belief that investors were too excited about U.S. “light tight” shale oil.

The company will next report results on July 25 after the close. Analysts are looking for a loss of 24 cents per share on revenues of $2.5 billion. When the company last reported results on May 2, earnings disappointed and analyst downgrades followed. 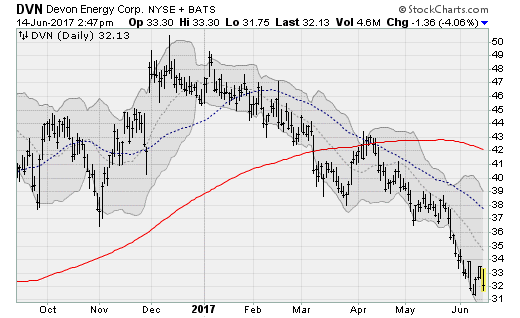 Devon Energy Corp (NYSE:DVN) shares, which are already down nearly 40% from their January high, are in full freefall mode.

If marginal support at $30 doesn’t hold, watch for a drop all the way back to the February 2016 low near $20, which would be worth the loss of another one-third.

The company, an independent E&P outfit based in Oklahoma, will next report results on Aug. 1 after the close. Analysts are looking for earnings of 38 cents per share on revenues of $3.3 billion.

When it last reported results on May 2, it beat both top-line and bottom-line estimates on a 67% rise in revenues driven by higher energy price realization. Unfortunately, it is now shifting into a headwind. 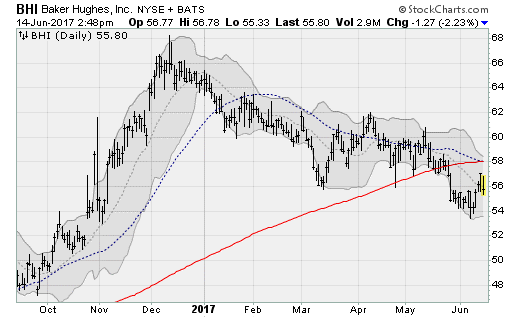 Shares of oilfield services provider Baker Hughes Incorporated (NYSE:BHI) are lingering below their 200-day and 50-day moving averages, readying a further reversal of the impressive 84% rally out of the February 2016 low.

Shares have since settled down nearly 18% but look set for a return to the late 2016 trading range near $50 — which would be worth a 10%-plus drop from here.