Over the past five years, the Apple dividend yield has quietly become one of the best reasons to own the stock.

However, the Apple dividend yield hasn’t gotten much attention because it has never gone much higher than 2% since Apple Inc. (Nasdaq: AAPL) brought it back in 2012.

But, as with many things Apple, appearances can be deceiving. For example, the annual Apple stock dividend payout of $13.22 billion is now the highest in the world, surpassing the $12.77 billion of Exxon Mobil Corp. (NYSE: XOM).

And while Apple has raised its dividend every year since 2012, the Apple stock price has simply outpaced the rate hikes.

Yield decreases as a stock price rises, and AAPL stock is up nearly 90% over the past five years.

The modest Apple dividend yield has disguised just how much value the Apple dividend has added for those who hold AAPL stock. While the stock alone is up just over 100% over the past five years, the total return – which includes the dividend payments – is nearly 170%.

As impressive as that is, it merely foreshadows what Apple investors can expect in the future.

That’s because even though it’s the biggest on the planet by dollar value, Apple’s dividend has tons of headroom…

But because Apple is such a cash machine, that payout is far below what Apple can afford. The company’s earnings per share are expected to be close to $9 for fiscal 2017 (which closes Sept. 30 for Apple).

That means Apple’s payout ratio – the proportion of earnings paid out in dividends – is only 28.1%.

If you look at the table below of the 10 companies in the S&P 500 with the highest annual dividend payouts, you’ll see that Apple stands apart from its peers in both categories. 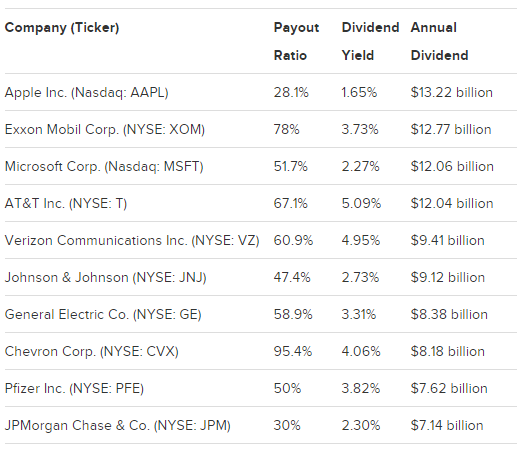 Most of the other top dividend-paying companies have payout ratios in the 50% to 60% range, almost twice Apple’s. In other words, the Apple stock dividend could double and still leave the company plenty of room for future increases.

Since 2012, Apple has raised its dividend each year. But more importantly, the company has promised to continue doing so – most recently in Apple’s Q2 earnings conference call last week.

And given what we know about Apple’s business and commitment to returning cash to shareholders, the only questions about future Apple stock dividends are how large they’ll be and how much they’ll amplify total returns.

In addition to the low payout ratio, here are three reasons growth of the Apple stock dividend will accelerate in the years ahead…

What to Expect from the Apple Stock Dividend

Since Apple launched its capital return program in 2012, the bulk of the money ($151 billion) has gone to share repurchases, with the rest ($60.2 billion) spent on dividends.

And while Apple is now planning to put more money into buybacks, this strategy has its limits. Since 2012 Apple has bought back 20.7% of its shares, reducing shares outstanding to 5.21 billion.

Plus, with the Apple stock price trading near its all-time high of $156.42, the company isn’t getting the kind of bang for its buck that it was in years past.

This should encourage Apple to shift a greater portion of its cash return program to dividend increases.

Two other factors that until now have restrained Apple’s willingness to raise its dividend are also changing.

The first is the cyclical nature of Apple’s income. The company’s Q1 (the December quarter) is by far its biggest as consumers scoop up Apple’s devices for the holidays.

But that dynamic is slowly shifting as services make up more of Apple’s revenue. Apple CFO Luca Maestri said last week that Apple’s goal is to double services revenue by 2020, which would increase its share to about a quarter of total revenue.

A more even cash flow throughout the year will make Apple more comfortable with larger dividend increases.

The other factor has to do with corporate tax reform, one of President Donald Trump’s priorities.

According to Maestri, 93% of Apple’s $256.8 billion in cash is stuck overseas, stranded as a result of the company’s determination to avoid paying the 35% U.S. corporate tax rate. It means that cash is unavailable for buybacks or dividends, compelling Apple to borrow money for those purposes.

The Trump administration has proposed cutting the corporate tax rate to 15%, which would put an end to the need for Apple to keep nearly all of those profits offshore. President Trump also promised a one-time tax for current offshore corporate profits that could go as low as 10%. That would unleash Apple’s trapped billions.

Corporate tax reform anywhere close to Trump’s proposals would greatly expand Apple’s ability to increase its dividend – and total return – in the future.

Now Let’s Do the Math

Here’s an estimate of what Apple’s total return will be in two years based on the company’s earnings estimates and rising dividend payments.

Even if Apple just continues to raise its dividend by 10% to 11% a year, the total two-year return will be in the 45% range – not bad.

But let’s say Apple feels compelled to speed up the rate at which it raises its dividends to around 20% or so. That would make 2019’s dividend $3.62 a share and only increase the payout ratio to a still-low 33%.

Meanwhile, the two-year total return would get a boost to 63%.