I’ve heard this saying many times over the years: you get what you deserve in life.

The decisions you make – be them good or bad – culminate into who you become, who you spend your time with, and what the world around you looks like.

But if you look at things on balance, choices and consequences tend to line up pretty well.

With that in mind, don’t you deserve more?

I don’t know about you, but I decided a number of years ago that I certainly deserve more.

I was a good person who was working hard, yet I found that I wasn’t really getting ahead.

I was overworked and unhappy.

That’s because I wasn’t making good choices with my money, resulting in the consequence of having to go out and earn ever-more money just to sustain my lifestyle.

But I turned it all around by living below my means and investing in high-quality dividend growth stocks, resulting in a very free and flexible life in my early 30s.

I started spending less on everything from rent to my mobile phone.

And I put that excess cash to work in dividend growth stocks like those you’ll find on David Fish’s Dividend Champions, Contenders, and Challengers list.

Good choices tend to manifest into good consequences. Indeed, the result of all that saving and investing is the six-figure portfolio that spits out five-figure dividend income for me to spend and/or reinvest.

That’s actually what today’s article is all about.

I discuss and personally invest in high-quality dividend growth stocks because I believe dividend growth investing is the best investment strategy for building lasting wealth and growing passive income.

Better yet, the growing dividend income you’re getting paid while holding dividend growth stocks provides a great source of increasing passive income that could be one day used to pay bills, rendering one financially independent.

But that doesn’t mean that one should go out and buy any dividend growth stock at any price at any time.

Stocks, like most anything else in life, have a price element and a value element.

Price is what you’re going to pay for a stock.

Price tells you how much the stock costs.

But value is what the stock is worth.

The most advantageous situation presents itself when price is significantly below value, meaning a stock is undervalued.

That’s relative to what the same stock would otherwise provide if it were fairly valued or overvalued.

Price and yield are inversely correlated; all else equal, a lower price will result in a higher yield.

That higher yield positively influences total return, as yield is one of two components of total return.

Capital gain, the other component, is also positively influenced by virtue of the “upside” that exists between the price paid and the (higher) worth of the stock.

Paying much less than what a stock is worth also reduces one’s risk.

That’s because there’s a “margin of safety” that exists when the price paid is well below the estimated intrinsic value.

A buffer exists when undervaluation is present.

In case something goes wrong with the investment, or in case a company does something it shouldn’t, you limit your downside when paying less.

That means the stock’s fair value would have to drop to below $50 before your investment is upside down (i.e., it’s worth less than you paid).

Fortunately, it’s not a terribly difficult exercise to go about estimating the fair value of just about any dividend growth stock out there.

With this in mind, let’s check out a dividend growth stock that appears to be undervalued right now…

Qualcomm, Inc. (QCOM) develops and licenses products and services based on its advanced wireless broadband technology including semiconductors for mobile phones.

Most people are familiar with Qualcomm whether they know it or not, as their tech and/or chips are present in almost every 3G and 4G handset sold around the world.

That’s because they own the majority of applicable patents relating to CDMA and OFDMA technology, meaning most 3G and 4G handsets are essentially unable to connect to networks without royalties being paid to Qualcomm.

Their IP and patents have put Qualcomm in an envious position, and this position should allow Qualcomm to remain incredibly profitable for many years to come.

While Qualcomm faces lawsuits based around the size of royalties it collects (which may alter/reduce the royalties Qualcomm collects), there’s no denying that their patents and licensing remain a high-margin profit engine for the company.

Indeed, Qualcomm has paid an increasing dividend for 15 consecutive years.

That’s a veritable lifetime in tech.

If that’s not impressive enough, the 10-year dividend growth rate is 16.5%.

For perspective, Qualcomm just recently increased their dividend by 7.6%.

The payout ratio looks high right now, at 75.8%, but that’s largely due to GAAP EPS being reduced by one-time charges relating to aforementioned legal action against the amount of royalties Qualcomm collects.

These ongoing issues could limit dividend growth until the company comes out the other side; however, the most recent dividend increase is probably a good baseline for near-term expectations in this regard.

The good news, though, is that the stock is compensating investors with a massive yield of 4.14% right now.

So you have that uncertainty and, perhaps, lower growth, but you’re also getting a very appealing yield.

That yield, by the way, is more than 150 basis points higher than the stock’s five-year average.

That’s not to mention that it’s also significantly higher than the broader market.

But we’re now going to look at the company’s growth profile in order to formulate an idea about future dividend growth expectations, which will later help us value the stock.

We’ll look at what Qualcomm has done over the last 10 years in terms of top-line and bottom-line growth before comparing those results to a near-term forecast for profit growth.

Really strong growth here, although some slight margin compression can be seen there with the bottom line.

Looking forward, S&P Capital IQ expects Qualcomm to compound its EPS at a 3% annual rate over the next three years.

This would be a severe drop from what’s transpired over the last decade. They note the legal headwinds as potentially impacting Qualcomm’s royalties negatively, but they also think the concerns are overblown. Moreover, they view increasing 3G and 4G penetration in emerging markets as a huge positive.

I think the main takeaway here is that there’s some near-term uncertainty balanced by a healthy long-term business.

We’ll now turn to the balance sheet and profitability as a check on the company’s other fundamentals.

Qualcomm’s balance sheet has long been a source of incredible strength.

The long-term debt/equity ratio is 0.31, while the interest coverage ratio is approximately 24.

In addition, the company holds almost $20 billion in cash on the balance sheet.

However, the balance sheet will take a hit with the announced acquisition of NXP Semiconductors N.V. (NXPI).

NXPI is a large semiconductor company that provides Qualcomm a big and growing footprint in automotive, IoT, security, and networking, and Qualcomm believes the transaction will be significantly accretive to non-GAAP earnings immediately after the transaction closes.

However, Qualcomm is paying approximately $47 billion in enterprise value for NXPI, which will be funded via cash on hand and through the issuance of additional debt.

If NXPI is as good as Qualcomm believes it is, it’s a great move. And it further diversifies the business (a positive considering the noted legal issues). But it’s a relatively large transaction, and it’s something to be mindful of here.

As you might have already guessed, Qualcomm sports incredible profitability.

The margin in particular is impressive. That’s because royalties can scale almost indefinitely. More handsets result in a lot more money for Qualcomm, yet the company doesn’t really have to work much harder for it.

Overall, Qualcomm hits all the notes I typically look for.

You’ve got very solid dividend growth over a pretty long period of time.

The top-line and bottom-line growth is strong. You have a very healthy balance sheet. Profitability is robust.

Now, there are some near-term risks, which have already resulted in some hits to GAAP EPS.

But I think it’s important to have perspective.

A recent arbitration judgement that went against Qualcomm was about $815 million, yet the stock is down almost 20% over the last six months.

Seeing as how Qualcomm is a $80 billion (by market cap) company, the stock’s recent correction has erased well over $15 billion from the company’s valuation.

So I believe there’s a tremendous opportunity here…

The stock’s P/E ratio sits at 18.29 right now. While lower than the broader market, that’s right about in line with the stock’s own five-year average. However, GAAP EPS has taken some sizable one-time hits. The P/B ratio, P/S ratio, and P/CF ratio are all well below their respective recent historical averages. And the current yield, as noted earlier, is substantially above its five-year average.

The stock does look undervalued then. But what would an estimate of its intrinsic value look like?

I factored in a 9% discount rate (accounting for the high yield) and a long-term dividend growth rate of 6%.

That growth rate is extremely conservative when you look at Qualcomm’s demonstrated 10-year growth for both EPS and the dividend, but I think the near-term uncertainty warrants extra caution.

Even with a pretty timid extrapolation of future dividend growth, the stock still looks cheap. But I always like to compare my viewpoint with that of what professional analysts come up with so as to add additional perspective and weight.

Morningstar ranks QCOM as a 4-star stock, with a fair value estimate of $68.00.

I came in higher, although all three numbers indicate quite a bit of undervaluation. Averaging the three numbers out gives us a final valuation of $70.62, which would mean the stock is potentially 28% undervalued right now. 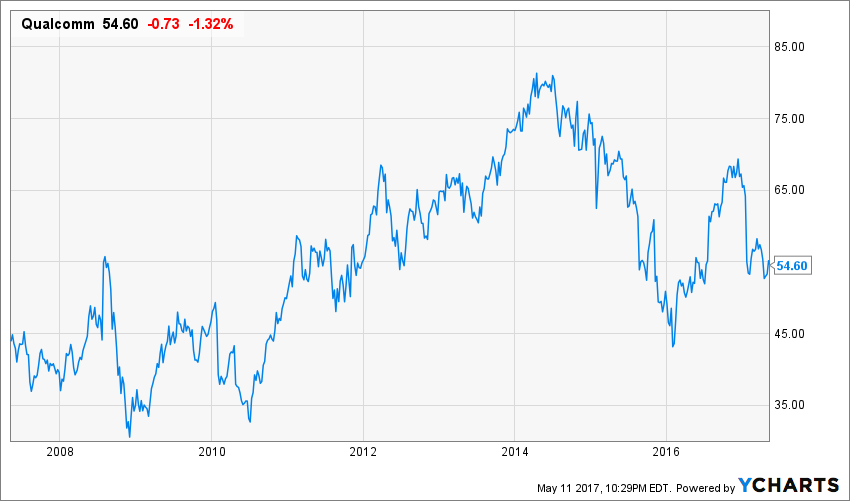 Bottom line: Qualcomm, Inc. (QCOM) is a high-quality dividend growth stock with near-term uncertainty but massive long-term potential. To compensate you for the legal drama, the stock offers a 4%+ yield and the possibility of 28% upside. The company has excellent fundamentals, an exciting upcoming acquisition, and plenty of growth potential. This dividend growth stock warrants strong consideration here.