United Continental Holdings (NYSE: UAL) drew the ire of the world two weeks ago – and with good reason. Unless you’ve been living in a cave or stuck in an airport terminal waiting on a connecting flight, you know the story…

[ad#Google Adsense 336×280-IA]Needing an extra seat to get crewmembers to their destination, United selected a random passenger to be “reaccommodated,” which apparently is code for “removed from the plane by force.”

Video of the concussed passenger, Dr. David Dao, has been viewed millions of times in the last two weeks.

As Alexander Green wrote in a recent column, the airline had many non-scandalous options for solving the overbooking problem on Flight 3411.

Instead of offering a fair incentive to deplane, like a gate auction, United decided to beat up and drag away a doctor.

The incident – and United CEO Oscar Muñoz’s ham-fisted handling of it – provoked outrage from observers around the world. Subsequent stories about a couple heading to their wedding being removed from their flight… and a passenger being bitten by a scorpion on another United flight added to a feeding frenzy of negativity around the airline.

What’s more, Muñoz lost a planned promotion to chairman because of his gaffe about Dr. Dao.

The bad press led to a decline in United shares, but note the conspicuous absence of a crash in the accompanying chart of United’s stock. 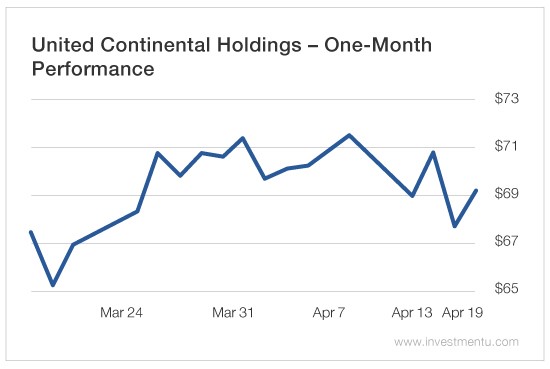 That’s not because United’s treatment of Dao was acceptable. It’s just the reality of the market. A scandal with one victim is unlikely to make a dent in an airline stock that is currently benefitting from low oil prices, high demand and the approaching summer vacation season.

Below, we’re explaining why this regrettable incident is ultimately a buying opportunity for United stock.

Good Times for the Airline Industry

Why hasn’t United stock crashed? The answer actually has very little to do with Dao… or United, for that matter. Airlines just have it really good right now.

That’s partially because the oil glut is dragging on into its third year. OPEC’s best efforts haven’t really stabilized prices… and OPEC itself may soon give up on its production-cutting deal. 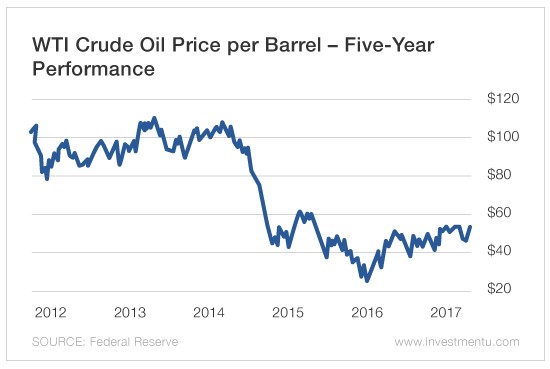 Last week, crude prices dropped again on news of higher-than-expected inventories in the U.S. and the Middle East. This is great news for airlines, as fuel is typically their largest single expense.

What’s more, summer vacation season is just a couple months away. The next few months are some of the busiest of the year for airlines. Low fuel prices plus surging demand equals a bullish backdrop for United stock.

One Victim vs. 143 Million Passengers

Here’s a little trivia for you… Which one is bigger: the number of customers United serves annually or the total population of Japan?

The answer? There are about 127 million people in Japan… and about 143 million United flyers every year. The way the airline treated Dao was atrocious… but he’s one guy.

United clearly has a boatload of demand… enough to net hundreds of millions of customers every year. Some of them might reconsider their choice of airline because of the Dao incident. But how many?

Would you pay for a pricier or slower flight because one doctor from Kentucky had a really bad experience with United?

What the airline did to Dao was wrong. There’s no denying that. But will the scandal be a long-term liability for the airline? Not likely.

From a business perspective, United is likely to shake off the bad PR and proceed into one of its most profitable seasons of the year. It might not feel good to buy the dip after this scandal, but it makes financial sense. United stock will almost certainly recover.