Both companies and investors have fled the tar sands in Canada since oil prices plunged 50% between 2014 and 2016. But one company has just discovered a revolutionary new way to extract oil in the region.

That means this one Canadian oil sands stock is primed for incredible gains.

The Canadian oil sands could be one of the most lucrative oil plays in the world.

There’s an estimated 315 billion barrels of oil in the oil sands in Alberta, which means Canada has the third-largest oil reserves in the world.

But even though there’s a ton of oil there, it costs so much to produce that most companies can’t make a profit with oil futures trading at $52.79 a barrel.

That’s about to change for one company…

And that means you have the opportunity to jump in on this Canadian oil stock before it skyrockets.

In fact, the stock is trading near its 52-week low, which means it’s the perfect buy-low opportunity.

That’s because Wall Street analysts are projecting the stock could surge 70% higher this year alone.

Why the Canadian Tar Sands Are a Huge Opportunity Right Now

The high production costs in the oil sands make some investors skeptical, but that’s only part of the story.

While it’s true production costs are higher, these expenses are front-loaded in the startup investment. Companies have to make a substantial initial investment to begin producing oil there. But once established, the variable costs are much lower.

In fact, the variable costs are as low as $20 a barrel. That means a company that’s made the initial investment can still profitably produce oil in the oil sands region.

But for companies like ConocoPhillips (NYSE: COP), which just unloaded $13.3 billion in oil sands assets, the big upfront costs aren’t worth the trouble. Like other Big Oil companies, ConocoPhillips has been bogged down in unprofitable megaprojects and needs to free up cash.

While companies like ConocoPhillips are selling land in the area, one company is buying assets in the tar sands and quietly taking control of the lucrative oil patch. And when its radical new technology is implemented, it will turn the oil sands into a money-making machine.

Cenovus Energy Inc. (NYSE: CVE) is our top oil sands stock because of its radical new SAP technology. This “solvent aided process,” or SAP, will expand on the steam-assisted gravity drainage (SAGD) process most companies currently use to boost efficiency and slash production costs.

SAP is 30% more efficient than the current approach adopted in Alberta. But the SAP technology can slash the breakeven price of the oil sands to $45 a barrel. That’s just above the cheapest breakeven price in shale oil, which is the Permian Basin’s at just below $40 a barrel.

In fact, Cenovus bought over $20 billion in oil sands assets from ConocoPhillips and Marathon Oil Corp. (NYSE: MRO) just last month, while both companies fled to the highly competitive Permian Basin. But that just leaves more room for Cenovus to control the oil sands.

But we aren’t the only ones bullish on CVE’s ability to profit here. Wall Street analysts are projecting CVE’s revenue could double this year. And its earnings per share could soar by 500% along with it. 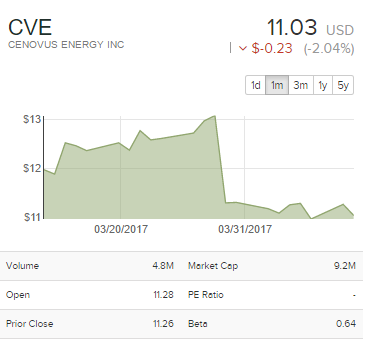 And these same analysts are forecasting CVE’s share price could leap over 70% this year alone. That could go much higher if the SAP technology is as effective as expected.

CVE is the perfect buy-low opportunity right now. It’s flying under the radar despite making huge moves in the oil sands. The stock is currently trading near its 52-week low, which means you aren’t overpaying for any hype.

But once CVE puts its SAP technology to use and starts churning out big profits, its stock is set to take off.