What kind of fool would bet on LOWER interest rates?

I would! And I did – earlier this month. Now we’re making money on the trade!

[ad#Google Adsense 336×280-IA]I know it’s hard to imagine that interest rates could go down. Everyone is betting on higher interest rates.

The latest issue of my True Wealth Systems newsletter was titled, “The Most Contrarian Trade You Will Ever Make.” It went out earlier this month.

Let me share with you some of the exact words I wrote to my True Wealth Systems subscribers earlier this month:

Bets on higher interest rates have hit an all-time extreme, based on one of our favorite sentiment measures – the Commitment of Traders (COT) report… It shows the real-money bets of futures traders in dozens of markets.

Like most sentiment measures, the COT report tends to be “wrong at the extremes and right in between”… [Futures traders] tend to pile into a trade at the worst possible time.

Recently, the bets on the benchmark 10-year Treasury bond in the futures markets hit never-before-seen levels. Take a look: 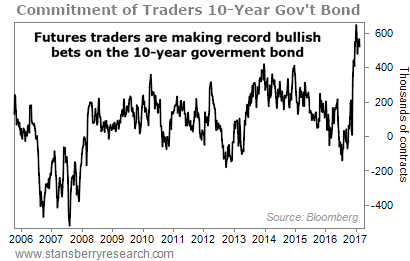 Futures traders are bullish… more bullish than they’ve ever been. That tells me this is a crowded trade.

So what could this mean for interest rates today? To find out, we looked at what happened at previous record highs.

We found that bets neared this extreme level only once before – in March 2005.

Back then, interest rates on the 10-year Treasury bond dropped from 4.6% to 3.9% in less than three months. Here’s what happened… 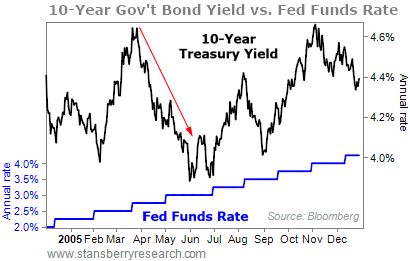 Now, this 2005 trade lasted about three months – that’s the typical life of a sentiment-based trade.

And that’s what we’re talking about this month – a sentiment-based trade.

It is not a long-term prediction on interest rates. It is a short-term trade.

I can’t share with you the exact trade I recommended to my paid subscribers. But what I can do is remind you that sentiment trades like this often last for about three months… So there’s likely a bit more “meat on the bone” when you make a trade like this. It has big potential upside in a short period of time.

More important, I wanted to share a great example of what typically happens when investors are “all in” on one side of a trade… In short, you don’t want to join them!

Earlier this month in my True Wealth Systems newsletter, we traded the opposite of, well, everybody. And we got it right.

If you’re a subscriber who followed my advice, congratulations. You are bold. This should be the most contrarian trade you have ever made.