Ever since President Nixon opened U.S.-China relations four decades ago, China’s economy has been on a tear. 10% annual GDP growth has been “normal” to the last few generations of Chinese nationals.

But lately, investors have been asking a troubling question about the economic powerhouse. Are we still seeing real Chinese growth? Or has it given way to a massive buildup of Chinese debt?

The debt problem in the world’s biggest country isn’t exactly new. It’s been quietly growing for the last decade. Does the graph below remind you of anything? 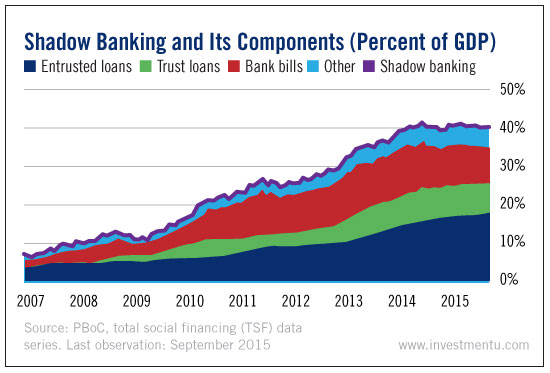 And there’s a reason why investors have started to talk about Chinese debt only recently.

For years, the nation has exploited its trade advantage to pay for all that industrial borrowing. It has used currency manipulation, export subsidies and other legally dubious “trade hacks” to hide its debt problem under a pile of foreign (and largely American) money.

And if he follows through, China could be cut off from the easy trade money it has used to fund its growing debts.

Will Beijing get a handle on the Chinese debt problem?

Or could it spiral into a much bigger economic downturn?

Below, we’re looking at the best- and worst-case scenarios.

The Best-Case Scenario: Beijing Takes Control of Its Debt Problem
In fairness, this problem isn’t totally unprecedented for China. It has squeezed its way out of some bubble-like situations in the recent past.

For example, the Chinese government has reined in a couple of housing bubbles in recent memory. It’s working on deflating another one now.

How does its government magically “fix” these speculative crazes?

Remember, China isn’t a democracy. And despite having a huge and market-based economy, it isn’t exactly capitalist, either. The Chinese government has the power to control its economy to a degree that Washington doesn’t.

For the most part, that’s a bad thing for Chinese people. Entrepreneurship (at least as we know it) doesn’t exist in China. All businesses are technically state-owned.

But these economic powers do come in handy when the Chinese are dealing with a bubble. The government deflated a housing bubble in the early 2000s by regulating the speculators out of existence. It introduced a series of taxes and investment rules to slow down real estate developers. That meant no more luxury high-rise buildings and no more housing bubble.

There’s a chance that China could do something similar with its growing corporate debt and shadow-banking liabilities. Beijing could crack down on aggressive industrial borrowing before the situation becomes a crisis.

At Investment U, we’re staunch believers in capitalism. And we generally frown at this kind of central economic planning. But in this case, the alternative is a Chinese economic meltdown that could drag the rest of the world down with it. So who are we to judge?

The Worst-Case Scenario: The Chinese Debt Bubble Bursts
Of course, it’s also possible that the Chinese government can’t get a handle on the country’s debt problem. If that’s the case, things could get real hairy real fast if/when President Trump goes on the trade warpath.

We know this because we’ve seen it happen before, albeit on a smaller scale. Believe it or not, President Obama put a few tariffs on China during his term. They were just on very specific products, rather than across the board like Trump has proposed.

The 2009-2010 tire tariff war is one such example. The United Steelworkers union (which includes tire factory employees) had complained about unfair competition from state-sponsored Chinese firms.

Subsidized companies like China Automotive (Nasdaq: CAAS) were dumping parts in the U.S. well below market price. It was a classic Chinese trade hustle. They were using subsidies, currency weakness and other tricks to sell a ton of cheap stuff.

In response to the union’s distress, Obama imposed a 25% to 35% duty on Chinese tires. China Automotive stock had fallen by roughly 80% by the end of the year. 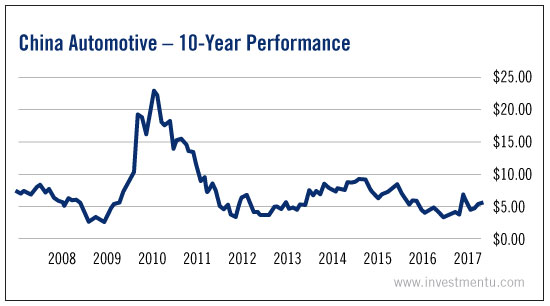 Without American trade money, many other Chinese companies could be reduced to shells of their former selves. Imagine this happening to Alibaba (NYSE: BABA), Baidu (Nasdaq: BIDU) and other Chinese giants. It could send China into a full-blown recession.

If you’re concerned about the Chinese debt problem, then there are some easy ways to protect your portfolio. Reduce your exposure to multinational Chinese companies like Alibaba and Baidu.

For China’s debt-fueled economy, the proverbial chickens may have come home to roost. Only time will tell whether it can keep growing if Trump cuts it off from America’s trade money. If it can’t, make sure you don’t get burned in the ensuing correction.