The market has experienced a heck of a ride since the unexpected election in November. Contrary to consensus opinion before the election that equities would sell-off in the unlikely event of a Trump victory, the markets instead soared higher. All the major indices have made frequent and consistent all-time highs.

However, the markets are starting to feel a bit tired, even though economic indicators have been surprisingly strong lately. For example, consumer confidence has surged to highs not seen since before the 2001 recession.

[ad#Google Adsense 336×280-IA]The Philly Fed Business Survey printed off its best levels in 43 years in February. Most importantly, the January and February jobs reports came in well over expectations.

That being said, the markets appear overdue for a pause, and I think equities are at a significant inflection point.

The key to where stocks could go from here could well hinge on the outcome of what happens with the Affordable Care Act.

The Republican leadership has proposed a new bill to repeal and replace what has become known as Obamacare over the years.

The markets generally don’t care about the merits of the current program or proposed legislation. What is important is that something gets passed in one form or another.

Politicians are like packs of wolves – once they sense blood they get bolder and hold their ground even more fiercely. Democrats are united in opposition to any sort of replacement for the ACA. With only a 52-48 edge in the Senate, Republicans can only afford three defections among their ranks in this effort to pass the new bill.

The question is whether the Republican party will let the most conservative wing of its group scuttle what has already been proposed.

Why is that important to the markets? Simple… if the replacement for the ACA does not get passed, the chances increase that major initiatives waiting in the wings behind this first ‘big lift’ will never gain traction. This includes big items like tax and regulatory reform as well as the large infrastructure spending bill.

So, will the most conservative part of the party scuttle the repeal and replace legislation in the name of ideological purity or hold their nose and vote for something they believe has a lot of flaws? That, to me, is the $64,000 question for investors and a critical event for where the markets go from here.

If you believe the Republicans can corral their fiercely conservative wing, get a replacement for the ACA through, and move onto other important items on the agenda, then I think the market can go higher. Infrastructure and construction still seem like good places to assign allocation to one’s portfolio if this scenario plays out. 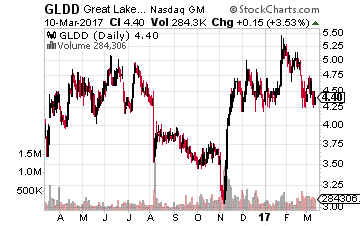 I recently picked up some shares in Great Lakes Dredge & Dock Corporation (NASDAQ: GLDD), the country’s largest dredging outfit. The stock has underperformed badly over the past few years thanks to some management missteps and other factors.

However, new management is getting into place and the shares have drawn attention from some smaller activist funds.

The company’s environmental and infrastructure division should post a profit in 2017 after five years of being in the red because new management only focused on bidding on profitable projects.

Its larger dredging unit should benefit from the effort to expand the nation’s ports to accommodate the larger vessels now able to come through the Panama Canal. Insiders have made some significant buys in the stock lately as well. 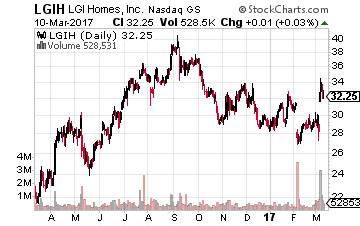 My favorite home builder continues to be LGI Homes (NASDAQ: LGIH), which just easily blew past quarterly bottom line expectations in its recent earnings report. The company posted a 40% profit surge in 2017 as well as over a 30% rise in revenues.

If you believe the repeal and replace efforts are doomed to failure, a decline in the stock market looks likely to be on the horizon.

In this case, you want to raise some cash. I also think in this scenario, the recent spike in interest rates in anticipation of faster economic growth might ebb and reverse. In that case, many REITs that have taken it on the chin should be one of the few sectors of the market that rally. 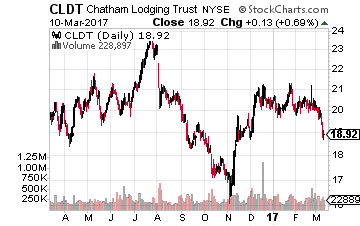 I personally like the lodging sub-sector of the REIT market. I have added some shares recently on the pullback in REITs to names like Hersha Hospitality (NYSE: HT), Chatham Lodging Trust (NASDAQ: CLDT) and Xenia Hotels & Resorts (NYSE: XHR).

All of them are well-managed, reasonably valued, and pay substantial dividends. All of these concerns have also seen insider buying in their shares recently as well.

Which strategy you take really depends on which way you believe this political drama will shake out in the weeks and months ahead.

As for me, I am going the Solomon route and splitting the baby down the middle as I view either scenario right now as a 50/50 probability at the moment.