Over the past couple of years, I’ve urged investors not to underestimate “the cloud.” And I’ve used my three Cs of technology investing – connectivity, content and community – to show how our world is changing… and what investors need to zero in on to be successful.

All of this leads to one of my top investment trends for 2017: the “Internet of Things” (IoT).

[ad#Google Adsense 336×280-IA]And this week, we saw these converge, delivering a big payday for investors in Mobileye (NYSE: MBLY), which was acquired by Intel (Nasdaq: INTC) for a whopping $15.3 billion.

Mobileye is synonymous with autonomous driving.

The deal gives Intel a leap forward in the self-driving space. But the price has raised some eyebrows…

At that $15.3 billion price tag, Intel is buying Mobileye for more than 20 times its 2018 revenue estimates.

By comparison, QUALCOMM (Nasdaq: QCOM) paid $47 billion to acquire NXP Semiconductors (Nasdaq: NXPI) in October. But NXP is the biggest supplier of chips to the automotive industry, and its 2016 revenue was $9.5 billion. So even though QUALCOMM’s purchase price of $47 billion seems large, it’s a mere 4.95 times NXP’s 2016 full-year revenue.

Now, Intel was already working with Mobileye. But now it gets all the partnerships that Mobileye has, as well as the corporate machine in place that drove Mobileye’s revenue to double in two years. And the synergies are what Intel keeps hammering about the Mobileye acquisition…

Because Intel wants to put its Xeon server CPU in every self-driving car. The fact is that there’s going to be 4 terabytes of data that need to be processed each day from each car. And that in turn means all those new cloud data centers offer their own opportunities.

But the reality is that this deal is just the beginning. Just a drop in the bucket…

And a harbinger of things to come.

Let’s take a step back and start at the beginning…

In 1967, the Volkswagen 1600 was at the forefront of automotive technology. The car came with Bosch’s Jetronic, the world’s first electronic fuel injection system. 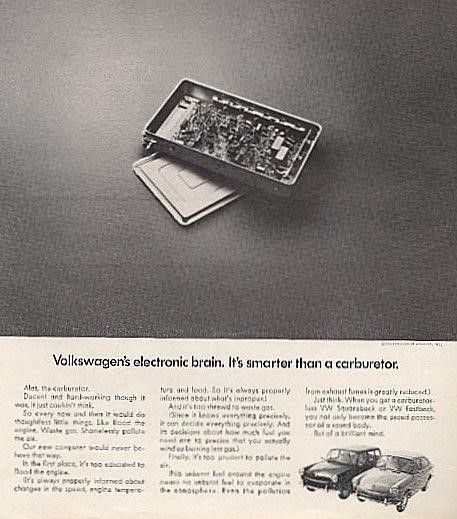 In 1969, Ford launched the first anti-skid system controlled by a computer. And in 1971, General Motors introduced the first computer-controlled transmission.

But these were “cavemen” – the Neanderthals to our modern machines.

They were big, slow and dumb compared to what those first automotive computer systems have evolved into. And beyond that, in the past 50 years, cars have gone from having one computer system to having more than 50…

Just think, each of these systems requires computer chips.

And we’re not even talking about autonomous or self-driving cars… at least not yet.

There was a time when semiconductor companies could rely on PCs and smartphones to survive… and even thrive. But those days are over.

Computers are getting more advanced and finding their way into a variety of appliances and devices – our Internet of Things.

And just one piece of that is automobiles. The fact is that your car is probably already connected to the internet.

But this market still offers considerable upside for tech companies. This is not only because of the amount of systems that already exist… but because as systems get more advanced, they need more chips. And the size of chips shrinks.

Take a moment and reflect back on the evolution of your cellphone to a smartphone – and the growth of chips packed inside.

What’s happened already has been one of the big drivers for the semiconductor industry in recent years. And just the near-term gains have been mind-boggling… (Save for one.)

Over the past year, shares of Intel have severely lagged those of competitors NVIDIA (Nasdaq: NVDA) and Advanced Micro Devices (Nasdaq: AMD)… 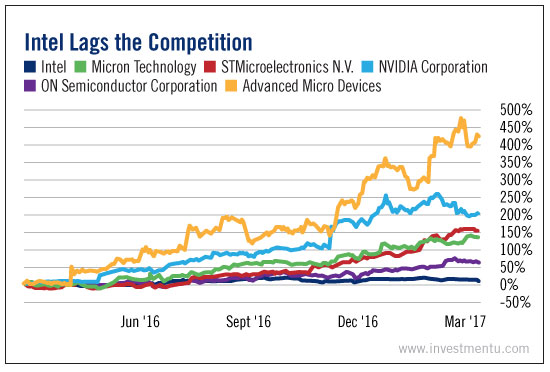 Other automotive-focused chip companies like Micron Technology (Nasdaq: MU) and STMicroelectronics (NYSE: STM) have gained more than 135% apiece. Meanwhile, ON Semiconductor (Nasdaq: ON) has gained more than 63%.

And the reality is, much of the semiconductor sector enjoyed a blistering run in 2016 – with huge gains being fairly commonplace in the past year.

For example, Applied Optoelectronics (Nasdaq: AAOI) and AXT Inc. (Nasdaq: AXTI) are both up more than 150%… Amkor Technology (Nasdaq: AMKR) is up 107%… Cirrus Logic (Nasdaq: CRUS) and Monolithic Power Systems (Nasdaq: MPWR) are up more than 50%…

But shares of Intel have gained just 10%, and management was feeling the pressure to do something to move the needle. Buying Mobileye sends a signal that it’s doing “something” instead of standing still and risking falling further behind. Intel is also making a big bet on the future of autonomous driving and related technologies.

The global automotive market for semiconductor companies is roughly $28 billion at the moment. But by 2020, it’s expected to grow to $40 billion. By 2030, the autonomous car market – both in-car and the necessary data centers – will be worth $100 billion.

Autonomous and self-driving cars are just one subset of the larger IoT umbrella. But the deals we’ve seen recently – with considerable price tags – show how much potential exists. Because, again, it’s not just the “thing” itself… it’s a whole ecosystem that’s being built out.