Buying wonderful businesses and then just sitting on those shares for a long period of time is easier said than done.

On paper, it sounds incredibly simple and straightforward.

But in real life, negative events can and do occur, making the journey far more rocky than an initial glance might indicate.

Indeed, the building of wealth is very much a dance where it’s two steps forward and one step back.

[ad#Google Adsense 336×280-IA]However, the building of income is substantially more steady over the long haul.

When we’re talking about the stock market, wealth and income are very different.

That’s because the former depends a lot on what millions of people think a particular stock is worth at any given moment.

The latter, however, depends pretty much solely on business operations.

Moreover, wealth matters very little to me at any given time, as I don’t spend my net worth down at the local “net worth store”.

I do spend income, however, and it’s the dividend income my real-life portfolio generates on my behalf that gives me great comfort, as this dividend income pays for most of my lifestyle, rendering me financially independent in my early 30s.

For perspective, that portfolio is already on pace to send me more than $11,000 in dividend income over the next 12 months.

But because I invest in high-quality dividend growth stocks, that dividend income is likely only going to grow from here, likely at a pace far faster than inflation.

Most of the stocks in my portfolio can also be found on David Fish’s Dividend Champions, Contenders, and Challengers list, which is a fantastic compilation of more than 800 US-listed stocks with at least five consecutive years of dividend increases.

Considering that, I’ll probably end up receiving closer to $12,000 in dividend income over the next 12 months, after you factor in dividend growth and dividend reinvestment.

But whereas my dividend income is steadily growing pretty much every single month, my wealth bounces around a lot.

But this is generally more of an opportunity than anything else.

Warren Buffett once stated (I’m paraphrasing here) that the best time to buy a great company was when it was essentially on the operating table.

Said another way, you want to invest in a great business precisely when it’s experiencing the most short-term problems, because that’s likely when the valuation is going to be the most depressed.

I view short-term volatility as a long-term opportunity.

And so I generally try to buy high-quality dividend growth stocks when they’re undervalued.

But value tells you what something is worth.

With stocks, the two can radically be disconnected from one another over short periods of time, but value tends to shine through over the long haul.

It’s that volatility over the short term that can cause stocks to sink, dropping one’s wealth, creating opportunities for the long term in the process.

And the intelligent investor is always keeping the long term in mind.

The reasoning for being attracted to high-quality stocks when they’re undervalued is quite easy to understand.

That’s all relative to what the same stock would otherwise offer if it were fairly valued or overvalued.

That higher yield positively impacts total return, as yield is one of two components of total return.

The other component of total return, capital gain, is itself also positively impacted by virtue of the upside that exists between the lower price paid and the higher worth of the stock.

So undervaluation should present both higher yield (income) and capital gain (wealth) relative to a fair valuation or overvaluation.

This all works to reduce risk, too.

That’s because one introduces a margin of safety when they pay far less than what a stock is estimated to be worth.

If you pay $50 for a stock worth $60, you have a big cushion there. So if the company does something wrong or doesn’t perform as expected, you have a lot of wiggle room before the stock becomes worth less than you paid.

All in all, a high-quality dividend growth stock that’s undervalued can be a great long-term investment.

Of course, one has to be able to estimate a stock’s fair value before knowing whether or not the price is appropriate.

It’s part of an overarching series of lessons on dividend growth investing, and it greatly simplifies the process of valuation.

But I won’t just leave you readers there.

Kroger is one of the largest supermarket chains in the country.

If there’s one trend I’ve been reading about lately, it’s that people are choosing to eat/cook at home rather than at restaurants, and this trend bodes well for grocers like Kroger.

In addition, while e-commerce continues to ravage general merchandisers, grocers are a bit more insulated from that threat due to the desire for people to get groceries locally, while they’re fresh.

Indeed, while a lot of major retailers have been seeing major drops in traffic, sales, and profit, Kroger continues to grow all of it.

The company has increased its dividend for 11 consecutive years.

Not the longest streak around (or even in retail), but they make up for much of that via the growth rate: Kroger sports a 10-year dividend growth rate of 16.5%.

And with a payout ratio of 23.4%, there’s still plenty of room left for continued double-digit dividend growth for the foreseeable future.

The only real drawback here in regard to the dividend is the yield.

At only 1.66%, any investors looking to live off of their dividend income anytime soon will be disappointed.

In addition, that’s well below the broader market.

However, that yield is is more than 20 basis points higher than the stock’s own five-year average yield, which speaks to the benefits of undervaluation presented earlier.

Keep in mind, too, that every stock offers a different blend of yield and growth. This stock just happens to tilt further in the growth direction and less toward current yield.

But before we try to figure out just how much dividend growth to expect moving forward, we must first look at the underlying growth of the business.

So we’re going to first go over what Kroger has done over the last decade in terms of top-line and bottom-line growth, which will help us build an expectation moving forward. To help with that forward-looking expectation, we’ll also look at a near-term forecast for profit growth.

The excess bottom-line growth occurred due to substantial share repurchases by Kroger. The outstanding share count is down by over 30% over this time frame.

Overall, very solid growth here. The only issue going forward is that Kroger might end up fighting the law of large numbers, as growing from their ~$115 billion base of sales is tough.

That said, S&P Capital IQ believes that Kroger will compound its EPS at an annual rate of 11% over the next three years, which would be right in line with Kroger did over the last 10 years. That’s also on the upper end of management’s own long-term projections.

Share buybacks, increased square footage, and identical-store sales growth are all pointed to as reasoning behind this forecast.

The rest of the company’s fundamentals paint a mixed picture, although some of this is simply related to Kroger’s industry more than anything else.

I think there’s some room for improvement here.

The long-term debt/equity ratio is 1.76, while the interest coverage ratio is under 7.

Both of these numbers aren’t great in either absolute or relative terms. Plus, Kroger maintains a pretty small cash position relative to its debt. Rising interest rates could threaten their long-term dividend growth and overall growth opportunities, which is just something to keep in mind.

Profitability is another area where the numbers don’t really jump out as impressive; however, that’s really more due to the fact that Kroger is in a very low-margin business.

So the margin is pretty standard stuff. The ROE is really strong, but we also need to consider the debt load.

Kroger is, in my view, one of the better supermarket operators in the country. And there’s certainly plenty of dividend growth potential moving forward.

Yet the stock is down more than 20% over the last year.

Well, short-term volatility is often a long-term opportunity. I’m not sure I’d say Kroger is “on the operating table”, but they appear to be at least in the hospital’s waiting room.

But has that volatility presented an opportunity?

The stock’s P/E ratio is sitting at 14.14 right now, which is clearly well below the broader market. Moreover, that’s very much disconnected from the stock’s own five-year average P/E ratio of 17.9. Every basic metric I look at is lower than its respective recent historical average. And the current yield, as noted earlier, is above its own five-year average for this stock.

So it does appear to be an opportunity here. But how much so? What is the stock likely worth?

I valued shares using a two-stage dividend discount model analysis. The two-stage model accounts for the low yield and high growth rate. I assumed a 10% discount rate. And I factored in a 14% dividend growth rate for the first 10 years, followed by a terminal dividend growth rate of 7.5%. Considering the demonstrated 10-year dividend growth rate, moderate payout ratio, and forecast for underlying growth moving forward, I think this is reasonable. The DDM analysis gives me a fair value of $35.37.

[ad#Google Adsense 336×280-IA]My analysis was fairly conservative, in my opinion.

Yet the stock still seems quite cheap.

But while the stock’s price has fallen, taking some current shareholders’ wealth with it, the income just keeps going up.

That’s really the name of the game, folks.

Wealth is transient and subjective. Income from high-quality dividend growth stocks tends not to be either.

Let’s now compare my valuation to what some professional analysts have come up with.

My opinion is just one of many, which is why I like to check in and see where I stand. It keeps me honest. And it adds perspective, which is never a bad thing.

Morningstar rates KR as a 4-star stock, with a fair value estimate of $33.00.

So I think there’s a pretty tight consensus here, with everyone agreeing that Kroger’s stock is worth somewhere around $34 or $35 per share. Averaging the three valuations out gives us a final figure of $34.52. Based on the current price of the stock, it appears to be 19% undervalued right now. 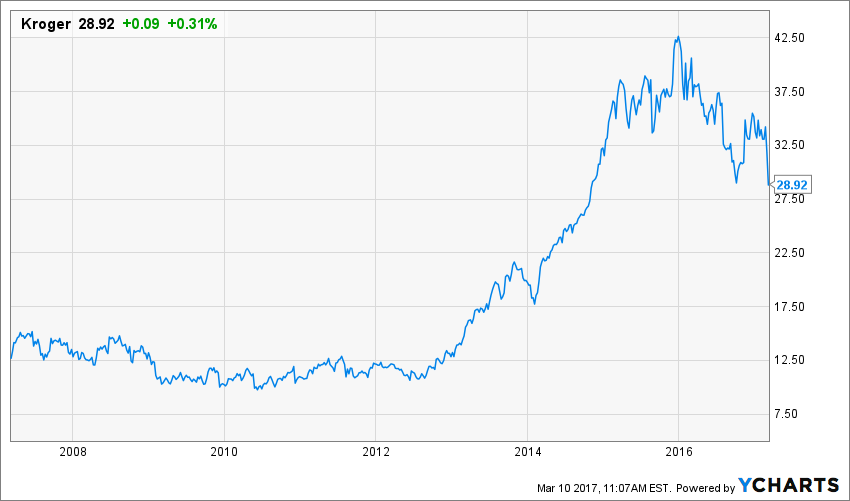 Bottom line: Kroger Co. (KR) is one of the country’s largest and highest-quality supermarket chains. Although being so large might actually be a bit of a drawback moving forward, they’re still growing at a brisk pace. With a very moderate payout ratio, double-digit dividend growth, and the potential for 19% upside, there’s a lot to like here. If your portfolio has room to stock up on a grocer, this is one of the finer options for long-term dividend growth investors.