In January, my True Wealth Systems computers alerted me to the big story the rest of the world was missing…

They told me a stealth bull market was beginning in Europe.

[ad#Google Adsense 336×280-IA]You see, European stocks are staging a major breakout this year. And that’s why the computers behind my high-priced True Wealth Systems service are signaling now is the time to buy.

But I’ve got an even more important reason to own Europe today… one that could mean triple-digit gains if history is any guide.

Let’s think about two different investments… We’ll call them Investment A and Investment B.

A and B are similar… but not identical. They generally move up and down together… But they don’t track each other perfectly.

You can think about it in terms of the housing market. For example, if your neighbor’s house goes up in value, then chances are yours will go up, too.

It’s not a one-for-one move, of course. One might move ahead of the other in the short run. But over the long run, the differences typically aren’t huge. If asset prices are going up in general, then your house and your neighbor’s house are both going up in value.

Investment A and Investment B are not houses. But over long periods of time, they have similar returns – they are correlated.

You can see how these two investments track each other on the next chart. The returns don’t match up exactly month over month, or even year over year. But over a couple of decades, things even out. Take a look: 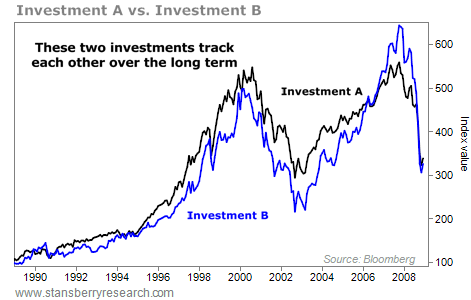 Based on this chart, over the long term, it doesn’t matter if you own Investment A or Investment B. They end up with similar returns over long periods.

That wouldn’t make much sense. It would mean that the overall landscape for homes was likely strong – because your house increased in value – but that your neighbor’s house was left behind for some reason. 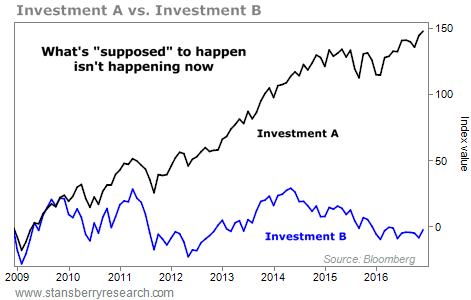 What would you do in this situation?

My answer is simple… I’d sell my house at that elevated price and buy my neighbor’s at a low price!

This is the incredible situation we’ve seen in European and U.S. stocks over the last several decades…

The charts above aren’t random lines. They show the S&P 500 (Investment A) and the EURO STOXX 50 Index (Investment B), which tracks Europe’s blue-chip stocks.

If that’s the case, then why should we care about owning European stocks today? Why shouldn’t we just buy U.S. stocks and forget about Europe?

Well, as the second chart shows, we have an extreme situation today.

While U.S. and European stocks move together over the long term, they CAN differ over the shorter term… And when those differences reach extremes, it sets up incredible buying opportunities.

That’s exactly what we have today… an incredible buying opportunity in European stocks.

The last time we saw an extreme anywhere close to this was 2002. What happened next? A massive multi-year bull market in European stocks. As I explained in DailyWealth last month…

If you’d waited for the uptrend before buying, then you would have bought European stocks in mid-2003. By late 2007, you would have made 172% gains. U.S. stocks returned just 74% over the same period.

I believe we could be at the start of a similar move right now. My True Wealth Systems computers show Europe is officially entering a stealth bull market. And with eight years of massive underperformance behind it, we could potentially see triple-digit gains from here.

That’s the No. 1 reason I’m buying European stocks in 2017. And I suggest you do the same.