If you can believe it, we’re already almost a quarter of the way through 2017. And that means earnings season is upon us once again.

As you likely know, those on Wall Street and day traders tend to whip themselves into a frenzy over quarterly earnings calls. An earnings per share beat of just a few percentage points can send a stock soaring. Likewise, a tiny miss can sink an otherwise healthy company.

Yes, EPS is an important measure of a company’s profitability.

But it’s not the only measure of financial health.

And the market’s panic response to earnings calls is not always rational.

As a result, individual investors who get caught up in the hysteria often get hurt.

Below, we’re reviewing a few things to keep in mind during earnings season.

Other Metrics Matter, Too
Are you a fan of our Stock Grader series? If so, you’ve probably noticed that only half of our key metrics have anything to do with earnings. We do factor in EPS, price-to-earnings and profit margins. But there are plenty of other important gauges of a company’s financial health.

A company can have good earnings but still be in bad shape overall. If a company is borrowing, spending or diluting equity at an unsustainable rate, that’s really bad. But these behaviors may not show up clearly in an earnings report.

You have to look at other metrics like cash flow, debt-to-equity ratio and return on equity to get the whole picture.

You know who always had great earnings reports to show their investors? These guys… 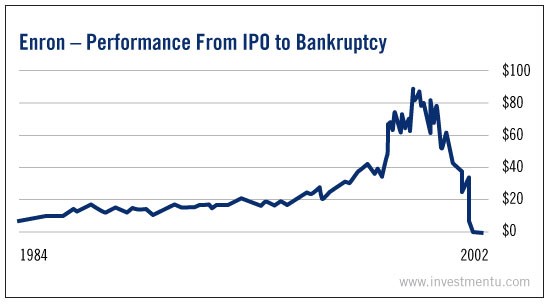 “Buy the Rumor, Sell the News” Can Turn Good Earnings Bad
As our Chief Investment Strategist Alexander Green wrote a couple months ago, it’s important to understand the difference between investors and traders. Chances are, if you’re reading this article, you’re an investor. That means you measure your returns in years or decades. And you make decisions based on the long-term reliability of a stock, not its short-term fluctuations.

The thing is, earnings season volatility is driven by traders who tend to be much more frenetic in their behavior. Traders are racing to be the first person to price a new piece of information into a stock. They want to get in on the latest “hot tip” before everyone else does. And as a result, they’re much more sensitive to business gossip than investors are.

Rumors are a fact of life in big businesses. Corporations are made of people, and people like to talk. Business rumors may or may not be accurate, but they still have a way of circulating around (and often outside of) a company. That reality has given rise to a toxic motto among short-term traders: “Buy the rumor, sell the news.”

As we mentioned earlier, traders are constantly racing against the rest of the market. So they don’t have time to verify a potentially lucrative piece of business gossip. Instead, they frequently buy on the rumor.

If that rumor is right, they’ve gotten in early on a hot tip. Even if it’s wrong, buying the rumor can be profitable for a day trader if a sufficient portion of the market believes the rumor. They just have to make sure they sell their “rumor stocks” before a false rumor is revealed to be false.

This gossip-fueled trading process can paradoxically turn good earnings performance into bad stock performance. If a rumor goes around that a company is going to have incredible earnings, and then the earnings are just pretty good, then a load of disappointed rumor traders might “sell the news.”

We saw this happen with Apple (Nasdaq: AAPL) after it released the Apple Watch. Rumors had circulated around Wall Street that the company was about to reveal a colossal quarterly EPS beat. It did beat analyst expectations… but not by a whole lot. Even though an EPS beat is good news, the stock price took a big spill. 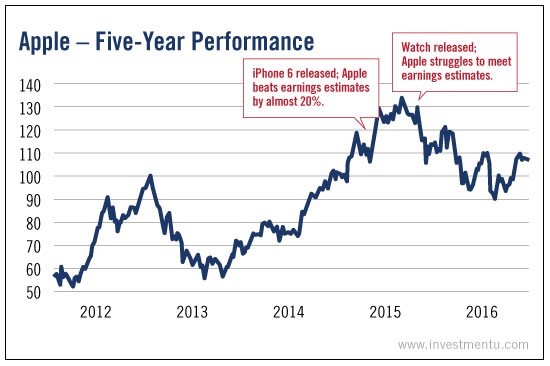 Merriam-Webster defines “hysteria” as “a behavior exhibiting overwhelming or unmanageable fear or emotional excess.” By that definition, Larry Fink might be right in referring to earnings season as “hysteria.”

The rush to trade on earnings reports is not always rational. In fact, a large part of it comes from gossip and oversimplified financial theory.

As a cautious and contrarian investor, pick the road less traveled – get more information than the earnings season mobs. Your portfolio will thank you after the next Apple Watch debacle.