Water is seemingly a commodity that is everywhere. Yet, its scarcity is a growing problem.

Despite the fact that water covers 70% of our planet, fresh water is a highly-limited resource. It accounts for a mere 3% of the world’s supply, with about two-thirds of that locked up in glaciers.

That number is likely to grow as global water consumption is forecast to rise by 85% by 2035.

The United Nations forecasts that, even by 2025, two-thirds of the world’s population will live in water-stressed areas.

The World Bank chimes in, saying that the world’s major cities are the hardest hit.

It says that even now one in four major cities is affected by water insecurity.

The report added that water availability could be cut by as much as two-thirds in urban centers by 2050.

We here in the United States are not immune to the problem. In fact, the U.S. Office of the Director of National Intelligence now ranks water scarcity as a major threat to national security alongside terrorism.

One need look no further than California to see that illustrated. A severe five-year drought threatened the state and not only from a drinking water viewpoint.

California produces more than 400 agricultural products. It has been our country’s leading agricultural state since 1948 and supplies 15% of our food supply.

There is the longer-term problem out west too. The crisis surrounding the Colorado River basin has been a continuous issue for nearly 17 years. It supplies critical water for seven western states including California and supports 15% of the nation’s food supply.

A very much related problem to that of supply is water infrastructure. The failing Oroville Dam in California again illustrates that problem as hundreds of thousands of resident had to be evacuated in case the dam fully broke.

But it’s not just major structures like dams that are failing in the U.S.

The World Bank reports, “Some cities… lose more water through leaking pipes than they deliver to households.” Sadly, some of those cities with rapidly deteriorating water-carrying infrastructure are right here in the U.S.

There are some estimates as high as 2.1 trillion gallons of water are lost annually here in the U.S. thanks to leaky pipes, meters, and water mains. With regard to that last item, the American Society of Civil Engineers (ASCE) reports there are roughly 240,000 water main breaks every year in the U.S.

So, it’s not shocking that the most recent ASCE report gave our country’s drinking water infrastructure a grade of D-.

That’s not good in the light of the fact that our country consumes 408 billion gallons of water daily for all uses, according to the U.S. Geological Survey.

Most people don’t realize it but the U.S. drinking water infrastructure includes more than 700,000 miles of pipe. That is more than four times longer than the National Highway System. And if you add in water-related pipes (sewer, etc.), we are talking about 1.5 million miles of pipe!

Many communities in the U.S. are still relying on pipes that have reached the end of their useful life. Many water pipes in the U.S. date from shortly after the end of World War II and some (cast iron) even date back to the 1880s.

One need think only of Flint, Michigan where the drinking water was unsafe. The harsh fact is that antiquated water systems are much more likely to break down and spread contaminants like lead. Estimates are that more than 2,000 water systems across the country currently have lead levels above federal safety limits.

Bottom line: water is a growth business. It is currently a $600 billion global business that is poised to grow to $1 trillion by 2020.

The American Waterworks Association says the cost of just maintaining the current systems and fitting them to our expanding population will require $1 trillion over 25 years. Pipes accounted $220 billion of that total. 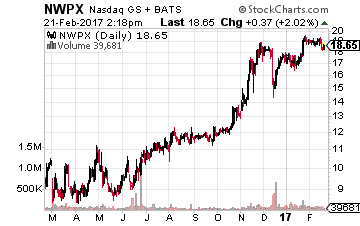 Here is just one example of a water investment opportunity ignored by most.

It is the largest manufacturer of engineered steel pipe water systems in North America.

But now, boosted by the election of President Trump and his expected infrastructure spending proposals, it has roughly doubled and is trading above $18 per share.

There are a number of other companies out there in various segments of the water business. 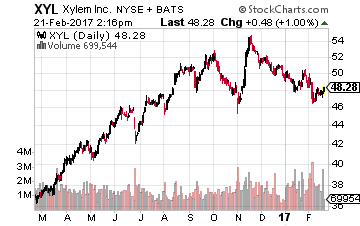 One example is Xylem (NYSE: XYL).

It is involved in every stage of the water “cycle”, with its five growth centers consisting of water transport, treatment, dewatering, applied water systems and analytics.

The company is also heavily involved with desalination efforts around the world. 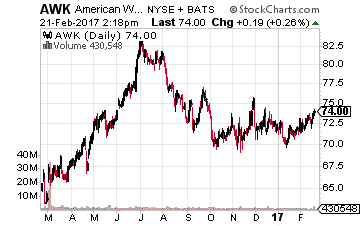 Another way to play water is through owning one of the major water utilities, such as the largest one – American Water Works (NYSE: AWK).

It treats and delivers more than one billion gallons of water every day.

These types of stocks are becoming relative bargains with Wall Street falling out of love with income-producing stocks.

There are numerous other ways to invest in water. Including one way favored by famed investor Michael Burry (“the Big Short”). More on that in a future story.