No one is sure of anything anymore – in investing or otherwise…

Buying stocks when uncertainty is high is a smart move. And that means right now is the time to own stocks.

What does “uncertainty” even mean? It’s a feeling, not a number.

The folks at Bloomberg came up with one way to track it – news mentions. Here’s what they wrote last week…

The number of news stories that contain the word “uncertainty” has reached a record, according to Bloomberg data, which include stories published from multiple sources.

Yep… According to Bloomberg, news stories are using the word “uncertainty” more than ever. And the data goes all the way back to 1992. Take a look… 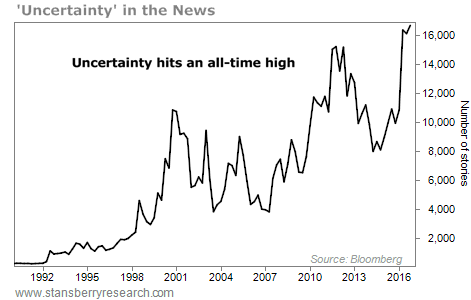 This might not be a perfect measure of market uncertainty. It’s not specific to markets… just news in general. But it helps prove a simple point about investing:

We want to buy when others are fearful… when there’s uncertainty in the market.

Just look at a few points on the chart above…

First, uncertainty hit a new all-time high in mid-1998. That was during the Asian financial crisis when many Asian currencies collapsed. It was an uncertain time, and it caused a quick fall in U.S. stocks.

But the U.S. market then entered an 18-month bull run – leading to roughly 50% gains.

Next, we saw peak uncertainty in the early 2000s as stocks fell from their highs in the dot-com bubble.

This set the stage for the mid-2000s boom. Stocks nearly doubled in five years.

We’ve also seen uncertainty rise in recent years… It peaked in 2012 just after stocks corrected due to the debt-ceiling debacle. Stocks have soared by more than 60% since then.

I hope you see the pattern here. Uncertainty isn’t a bad thing for stocks.

We want to own stocks when things are uncertain. And based on this measure, uncertainty is at a record high.

So for now, the message is clear: We want to own U.S. stocks today.