The market is off to a much stronger start this year than the bloodbath equities were greeted with to begin 2016.

Biotech, after a dismal 18 months of underperformance is no exception.

Sentiment on this beaten down part of the market started to improve immediately after the unexpected election result in November.

The specter of any new major regulations or legislation has been taken off the table and the new administration has pledged to streamline the FDA and speed up the drug approval process, long overdue changes and ones that will benefit the industry. 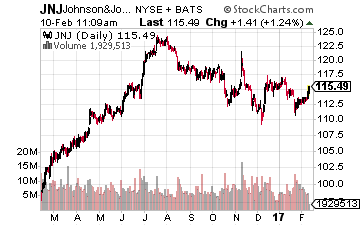 More importantly, M&A is starting to pick up after a down year in 2016. Johnson & Johnson (NYSE: JNJ) bought Europe’s biggest pure play biotech concern for $30 billion in late January and there have been a couple of other transactions north of $5 billion as well early in the year.

Buyout speculation is picking up markedly in the past few weeks as well.

Given this backdrop, I think small and mid-cap concerns in the sector could do very well in 2017.

Here are three names I have recently added to. 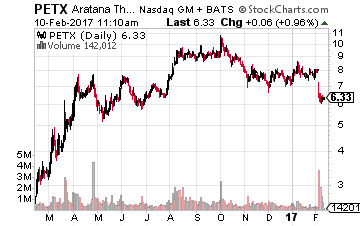 Let’s start with Aratana Therapeutics (NASDAQ: PETX), a unique veterinary drug play. The stock recently sold-off by more than 20% as one of its compound’s “Entyce” rollout has been delayed by a couple of quarters.

The launch of Entyce is not being delayed because of problems with the drug itself which was approved by the FDA’s Center for Veterinary Medicine {CVM} in May 2016.

However, this compound will now not be commercially available until late 2017 while the company works through the regulatory requirements to transfer manufacturing to a new vendor.

[ad#Google Adsense 336×280-IA]The company’s two other approved drugs in 2017 “Galliprant” and “Nocita” are being launched and are not affected by this manufacturing change.

The company ended the third quarter with slightly more than $100 million in cash and cash equivalents which represents just over 40% of company’s market capitalization after this week’s drop.

I have talked to several vets recently and they are very excited to see both products on the market and plan to prescribe them to their pet patients.

The Entyce issue should cause less than $10 million revenue hit in 2017. Hardly worth the over $60 million drop in market capitalization the stock endured in the aftermath of this announcement. It is a gift to longer-term investors who take advantage of this entry point in my opinion. 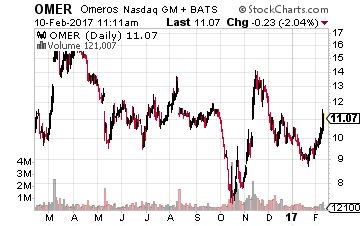 Let’s move on to Omeros (NASDAQ: OMER), a beaten down small cap that has seen some upward momentum in recent trading sessions. The company has one product “Omidria” already on the market.

Omidria is approved for use during cataract surgery or intraocular lens replacement as it prevents pupil constriction during surgery and reduces postoperative ocular pain.

It is the first and only treatment approved for these procedures. The compound was launched just less than two years ago and has achieved an approximate $50 million annual run rate as far as sales. The company has implemented some recent changes that should accelerate sales growth in 2017 and beyond.

In addition, the company has several other compounds in its pipeline. OMS721 has blockbuster potential and as you can see above is advancing across five separate indications as well as various other compounds in pre-clinical stage.

The stock gained some recent momentum after being significantly oversold. The shares have moved from just under $9 a share to just over $11 a share in the previous three weeks. However, the current median analyst price target on Omeros by analysts that cover the stock is north of $35 a share. Given this, I have a very favorable risk/reward profile on this small cap concern with market capitalization of just $450 million. 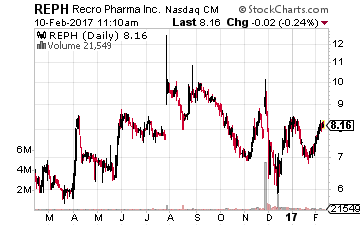 Finally, our smallest highlighted firm today will be Recro Pharma (NASDAQ: REPH). The company is developing more effective versions of existing drugs, and it reminds me of Eagle Pharmaceuticals (NASDAQ: EGRX), which delivered an over 400% return for the Growth Stock Advisor portfolio in 2015 using that same strategy.

The most important of the two primary compounds currently in late stage development is an IV version of meloxicam.

This compound has been around since the 90s. This drug is a long-acting compound with preferential COX-2 inhibition that possesses anti-inflammatory, analgesic, and antipyretic activities. Unfortunately, in its oral form it takes 5-6 hours to take full effect.

Recro has developed a proprietary injectable form of the drug which is in late stage testing using an IV version and earlier stage testing for intramuscular delivery. The benefits of Recro’s version of Meloxicam is it’s much faster acting than the oral version and should find a ready market if approved, which seems likely given trial results to this point. The company is targeting mid-summer of 2017 for filing a NDA for its IV version of Meloxicam.

The stock is selling at just over $8.00 after a recent rally and sports a market capitalization of just $100 million. Approval of IV Meloxicam could be a significant catalyst for the company, and the median price target on the stock by the analysts that cover Recro is $20.00 a share.