It’s [the weekend] in the Wall Street Daily nation!

For the newbies in the group, once a week, I embrace the adage that a picture is worth a thousand words. And I select a handful of graphics to convey important economic or investment insights.

[ad#Google Adsense 336×280-IA]This week, I’m dishing on a trio of “evers” — the biggest technological trend ever… the most epic pairs trade ever and the worst IPO trend ever.

Before you dismiss me as a melodramatic analyst prone to extreme hyperbole, check out the charts!

Mobile Is (Still) Eating the World
For nearly a decade, I’ve been saying, “The exploding use of mobile devices promises to be the fastest-growing — and possibly biggest — technological trend ever.”

Certainly, by now, there must be signs of it letting up, right? Wrong! 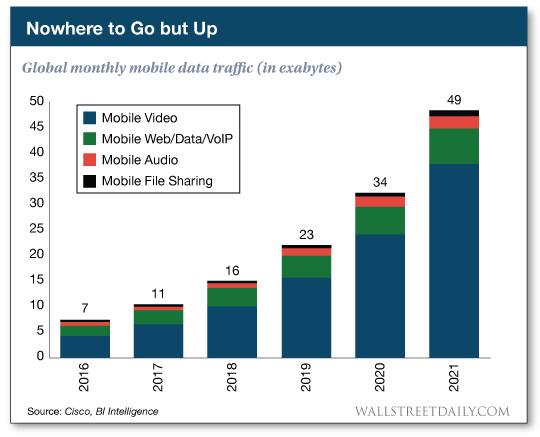 The data in the 2016 Cisco Mobile Visual Networking Index Forecast reveal mobile data consumption is expected to increase sevenfold by 2021.

At that point, mobile data traffic will account for 20% of all internet traffic. So while the trend might be getting long in the tooth, there’s still a long way to go.

If there ever was an area of the market to overweight in our investment portfolios, this is it!

Amazon Eating Everything
If mobile is eating the world now, Amazon’s going to eat everything next.

The online book-seller-turned-retail-dominator keeps gobbling up more and more markets and market share.

There’s no sign of this trend letting up, either. Going long Amazon has done — and should continue to do — a portfolio good.

Of course, Amazon’s ever-widening dominance is coming at the expense of other retailers. There’s probably no better poster child for this than Sears Holdings Corp. (SHLD).

Although the stock’s down over 90% since 2007, there’s still a long way to go. It’s destined for the courthouse steps, in my opinion.

In other words, go long Amazon and short Sears. It already ranks as a “Hall of Fame” pairs trade. By the time Sears finally crumbles, it’ll rank as the most epic (and profitable) pairs trade ever. 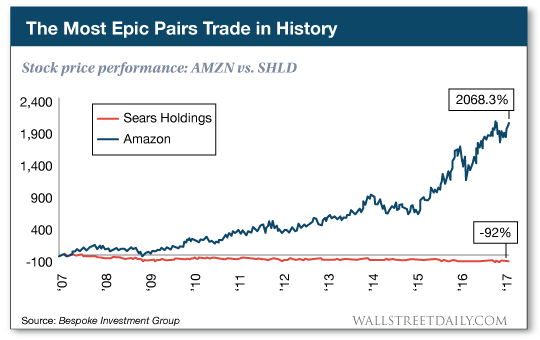 And right on cue, the IPO hype machine is in full effect.

But don’t fall for it. Even before the S-1 filing was made, I was urging caution. (Check out my appearance on Cheddar on Dec. 27.)

And now I have the data to prove it! 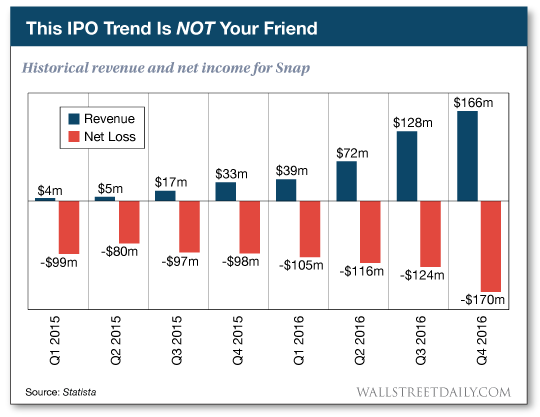 When we invest in IPOs, we’re investing in the future growth and profits of a company. However, the only thing Snap seems to do well is burn money.

The trend is not your friend here. It’s accelerating in the wrong direction. Caveat emptor!

Ahead of the tape,

7 Tech Stocks to Stay Away From Right Now

This Isn’t the Time To Sell Stocks