Income investors have mined just about every corner of the market for yield. Blue-chip dividend stalwarts like Microsoft (MSFT) and Exxon Mobil (XOM) are downright expensive at this point thanks to a growing crowd of yield hunters.

But in my hunt for less appreciated sources of high yield, I’ve come across three stocks that the financial media barely discusses, and that most investors don’t even know about.

What really sticks out about these stocks isn’t just their yields – which range between 7% and 12%! – but their range of unique and unusual business models. Some of Wall Street’s best speculations lie in little-known areas of the market where there are wide moats and little competition thanks to the niche nature of these opportunities.

When it comes to the business of flight, most investors are familiar with the two primary industries: aerospace manufacturers such as Boeing (BA), and airline operators, whether they’re majors like American Airlines (AAL) or regionals like Alaska Air Group (ALK).

But those willing to travel off the beaten path will find a third option: airport operators.

In this case, in Mexico.

Grupo Aeroportuario del Centro Norte (OMAB) operates 13 airports in Mexico across nine states. Its locations include tourist locales such as Acapulco and Mazatlan, as well as the business hub of Monterrey. It also operates cargo handling services at two of its airports, and recently teamed up with Spain’s NH Hoteles to operate a five-star hotel in Mexico City International Airport.

OMBA has paid dividends since 2007, though it has gone from more frequent periodic payments to a single annual payout starting in 2015.

After years of impressive stock gains, OMAB fizzled hard in the back half of 2016 under the weight of lofty expectations. Still, the growth story is impressive. In December, Grupo Aeroportuario announced a third straight year of record passenger traffic, which grew 14.5% year-over-year at its terminals in 2016. Annual revenues and income have been on the rise for years, and while analysts see a slow 2.3% improvement in the top line for the current year, profits still are expected to explode by 28%.

Grupo Aeroportuario’s Pullback: Is Now the Time to Jump at This Double-Digit Yielder? 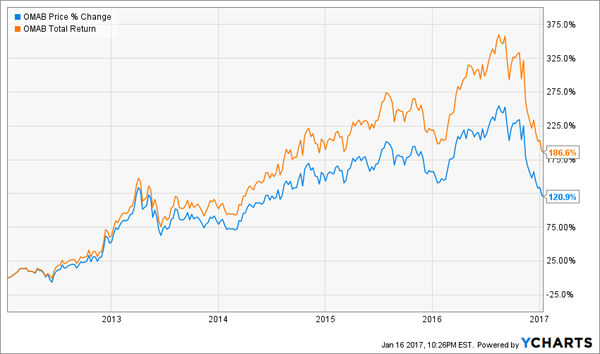 And OMAB upped the ante on its annual dividend this year, doling out a 4% hike to roughly $1.60 that currently yields around 11%.

StoneMor Partners LP (STON) is a grim business that’s currently in the midst of a morbid situation. The question investors have to ask is whether this double-digit yield play can be raised from the dead.

StoneMor Partners is one of America’s largest “deathcare” companies, operating 317 cemeteries and 105 funeral homes across more than half of the United States, as well as Puerto Rico. To give you an idea of the kind of operational scale we’re talking about, its burialplanning.com portal helps people find cemeteries, review burial options, research products such as caskets and burial monuments, and even obtain “final expense” insurance plans.

Shares were more or less range-bound between 2011 and late October 2016, though dividends significantly padded those returns.

But then the bottom fell out.

Stonemor on Oct. 27, 2016, announced that it would be temporarily reducing its quarterly distribution – and it was no small cut. The 33-cent distribution was half of the prior period’s payout, and that sparked a mass exodus that sent STON shares down 45% in one day! 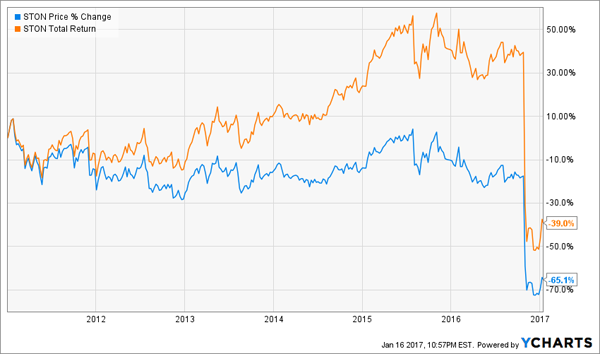 The announcement preceded its third-quarter earnings report, which included a 4% decline in revenues – but far more worrisome, a net loss that ballooned from $3.26 million to $11.6 million. CEO Larry Miller, in announcing the dividend reduction, said efforts to regrow the company’s sales force had “meaningfully lagged our expectations, resulting in a negative impact on our revenue.”

Now, investors must play the waiting game, as Stonemor doesn’t expect to reach its sales productivity goals until the second half of 2017. But thanks to STON’s massive selloff, the stock still yields 12%-plus even with the reduced payout. If Stonemor is successful, then, investors could be sitting on a powder keg of both income and rebound potential.

Vector Group (VGR) is responsible for tobacco brands including Grand Prix, Eagle 20’s, Pyramid and Eve. Nothing abnormal about that, right? After all, substantial dividends – British American Tobacco (BTI) yields nearly 4%, and Philip Morris International (PM) pays out 4.6% — are the norm in the tobacco space.

But VGR is actually more than just tobacco.

Vector Group is a holding company that also boasts a significant real estate business that makes up roughly 40% of revenues. This division includes a roughly 70% stake in Douglas Elliman Realty, LLC, which operates the largest residential brokerage company in the New York metropolitan area.

VGR also is a weird bird in that it utilizes a dual-dividend system, paying out both a 40-cent quarterly dividend (that has remained unchanged for years), as well as a tax-friendly 5% stock dividend each year.

The risk with Vector Group is the sustainability of its dividend.

How Long Can Vector Group (VGR) Keep It Up? 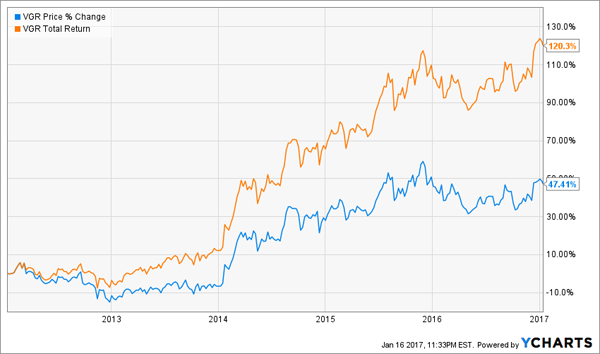 While VGR has paid a continuous dividend since the 1990s, it’s hard to tell exactly how the company can persist at this rate. Dividends have outstripped free cash flow for years, and all the while, debt has ballooned from less than $600 million in 2012 to more than $1.1 billion as of late 2016. Meanwhile, as VGR adds more shares to the pile every year through those stock dividends, it’s on the hook for even more in dividends without increasing the nominal payout.

Still, investors who have been willing to play VGR’s game of financial chess have been well-rewarded in the past few years.

When you’re hunting for big dividends, you occasionally have to take a leap of faith, whether that means investing in a little-known Mexican airport operator or a down-on-its-luck funeral home manager.

But while you often have to take big risks, you don’t ALWAYS have to.

I want to introduce you to my 8% “no withdrawal” retirement strategy, which features a number of generous AND secure dividend payers that will allow you to rely entirely on dividends while leaving your principal 100% intact.

That’s not entirely accurate. Your principle will be more than 100% intact thanks to price gains like these! With my “no withdrawal” strategy, your principal should be 110% intact after year 1, 120% after year 2, and so on.
My strategy? I’ve tracked down a set of stocks and funds that …

This hasn’t been easy. I’ve been researching and grilling management because online tools simply don’t provide enough information. I also track insider buying, because I want to make sure that corporate leadership that actually has skin in the game. That’s the kind of motivation that really drives shareholder-friendly policies and monster returns.

Three of the best income buys on the market today are a trio of “blue-chip” funds that provide retirement diversification without sacrificing performance. And the yields are simply outstanding. We’re talking about three slam-dunk investments that yield 8.2%, 9.9% and 10.1%! And they trade at 10%-15% discounts to their net asset value (NAV) to boot!

These funds are perfect for your retirement portfolio because they minimize downside risk. Even if the market takes a tumble, these top-notch funds will simply trade flat… and we’ll still collect those fat dividends!

If you want to live off dividends alone while actually growing your nest egg, these are the ideal holdings for you. Click here and I’ll explain more about my no withdrawal approach – plus I’ll share the names, tickers and buy prices of my three favorite closed-end funds for 8.2%, 9.9% and 10.1% yields.