That makes two of us.

[ad#Google Adsense 336×280-IA]So today, we’re going to take the long view, starting with a strategy you can use to steadily bulk up your nest egg—even if you’re 10 years or less out from retiring—and trigger a reliable income stream once you do.

Then I’m going to reveal 5 of my favorite dividend-growth retirement stocks to buy now.

“Wait a minute,” you’re may be thinking.

I have two answers to that.

First, as I mentioned in a column [last week], this year’s rate hysteria looks a lot like last year’s, when Janet Yellen said she’d raise rates four times in 2016. The futures markets were betting on two.

In the end, we saw just one, in December … and here’s how the iShares Core High Dividend ETF (HDV) performed over the past year, compared to the benchmark SPDR S&P 500 ETF (SPY). 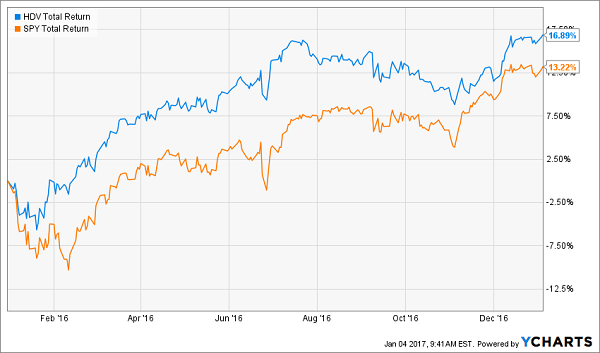 Could history repeat? It seems likely.

Today, for example, we have the Fed making noises about three rate hikes this year. The futures markets again see two—in June and November: 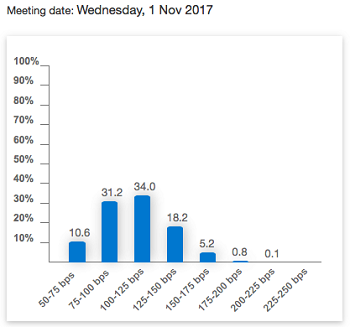 Given their track records, I’m going to take the “under” on both predictions. And two quarter-point hikes aren’t much of a threat to dividend stocks.

As for the yield on the 10-year Treasury, it’s jumped since Election Day, but its run is starting to look long in the tooth: 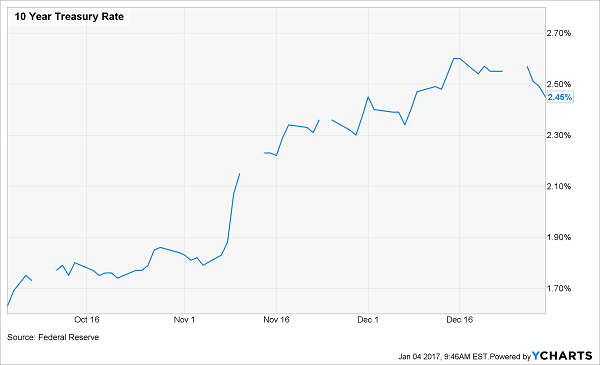 The bottom line? Now is the time to get greedy for yield and dividend growth—starting with the five stocks I’ll show you in a moment.

All five are already out of favor and cheap today. That gives you some downside protection, no matter what happens with rates.

If you want even more insurance, go with one of my favorite retirement investing strategies: dollar-cost averaging (DCA).

It’s dead simple: instead of buying all at once, commit a fixed dollar amount to a stock (or group of stocks) on a set schedule.

The upshot? You’ll never have to worry about buying at the peak, because you’ll naturally buy less when prices are high and more when they’re low. Over time, that can lead to some serious outperformance.

Here’s an example of how it works, using one of the long-term buys I recommend now, Intel (INTC), as a model.

Let’s say you bought $5,000 of INTC on the last trading day of the year every year for the past decade.

But thanks to the periodic nature of your purchases, your average price would have been just $26.06. That’s a big discount to the stock’s average price of $31.47 during that time and far below today’s price of $36.27.

And thanks to Intel’s dividend, every purchase bulks up your income stream, allowing you to buy even more shares. The company’s payout growth also means you’d be yielding 3.9% on your initial buy, compared Intel’s current trailing-twelve-month yield of 2.8%.

It’s about as close to no-risk investing as you can get!

A Bargain Tech With Serious Upside

Even if you go all in on Intel now, it’s hard to argue you’d be doing so at a peak: the stock trades at just 13.0 times forward earnings, a big discount to chipmakers like Nvidia (NVDA) at 34.8, and Texas Instruments (TXN) at 20.4.

Investors see the company as closely tied to the flailing PC market. But it’s quietly shifting to fast-growing areas, like the Internet of Things: in the latest quarter, the Client Computing Group, which includes mobile and PC chips, accounted for 56% of Intel’s revenue, down from 59% a year ago. 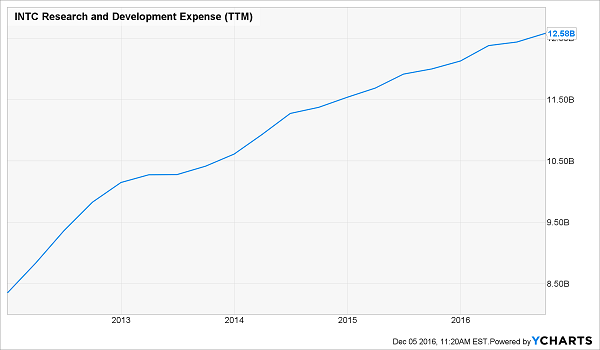 The company can easily keep that up and boost its payout for years to come: earnings per share (EPS) were up 7.8% in the third quarter, and the balance sheet is rock solid, with $27.6 billion of long-term debt and $17.8 billion of cash.

General Motors (GM): Ignore the tweeter-in-chief; GM will be fine no matter what happens with Mexico. Even first-level investors get that: here’s what the stock’s done since Trump took aim at GM on Tuesday morning. 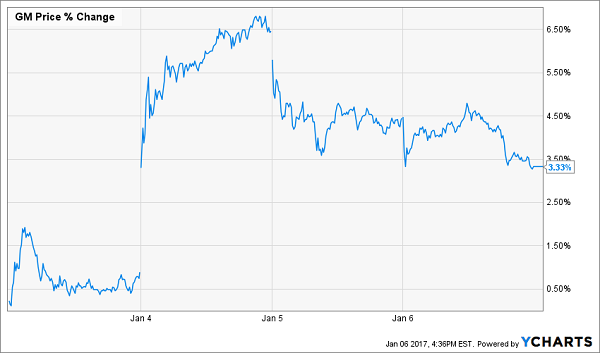 Meantime, the company’s third-quarter numbers were music to investors’ ears: revenue was up 10%, and diluted earnings per share (EPS) more than doubled … and yet, GM trades at just 6.4 times forward earnings.

Even if car sales plateau—as they likely will after setting another record in 2016—the dividend, which yields 4.2% and accounts for just 17% of GM’s last 12 months of earnings, will keep growing.

These companies are mostly domestic-focused, so they have little to fear from the president-elect. Many, like FAF, have just a handful of analysts covering them. The title insurer has a market cap of $4.4 billion and just five analysts keeping watch.

That’s great, because it lets us buy this 128-year-old stalwart at just 12.5 times forward earnings. For that, you’ll also get a 3.2% dividend yield—the highest since FAF started paying dividends in 2010.

And that dividend is safe as … well … houses: revenue and EPS both jumped in Q3, and FAF pays out just 35% of trailing-twelve-month EPS as dividends.

The discount stems from fears that higher interest rates will hurt the housing market. But with the yield on the 10-Year flatlining and faster GDP growth likely, I’ll happily take the other side of that bet.

S&P separated real estate investment trusts (REITs) into their own index last summer. Since then, it hasn’t gotten much love: according to Bank of America Merrill Lynch, the REIT index is the most underweighted in the S&P 500 by active managers.

But that fear is way overblown: REITs did fine in the last rising-rate period, from July 2004 through June 2006.

Today, a great play in the space is American Tower (AMT).

AMT benefits from one of the strongest trends there is: surging demand for mobile data.

It has 144,000 wireless towers it rents to big players like Verizon Communications (VZ) under long-term contracts.

That translates into soaring funds from operations (FFO), which AMT is shoveling out to investors in the form of a dividend that’s risen every quarter since 2012.

AMT Investors Get a Raise Every 3 Months 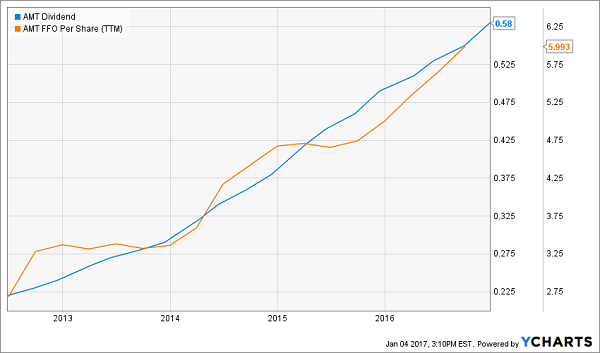 Even so, AMT underperformed the market in the past year and now trades at a reasonable 17.8 times trailing-twelve-month FFO. 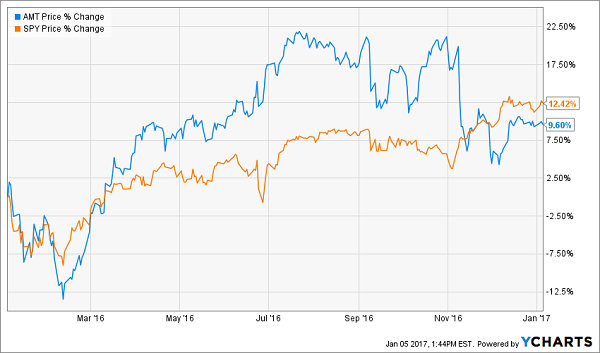 While its 2.1% yield is less than exciting, its quick payout growth means you’ll start bulking that up almost immediately. If you’d bought in April 2012, for example, you’d be yielding 3.4% today.

Door-Crasher Sale on This Retail REIT

The stock yields 3.4% today, much more than you get from AMT, and it’s hiking its payout at a rapid clip: in the past five years, the dividend is up 63%.

Like many REITs, Tanger has been held back by rate fears, but management is soldiering on anyway, quietly clocking big rent increases on renewed leases in Q3, while boosting its occupancy rate to 97.4%.

Both factors are translating into skyrocketing FFO … and big payout hikes: 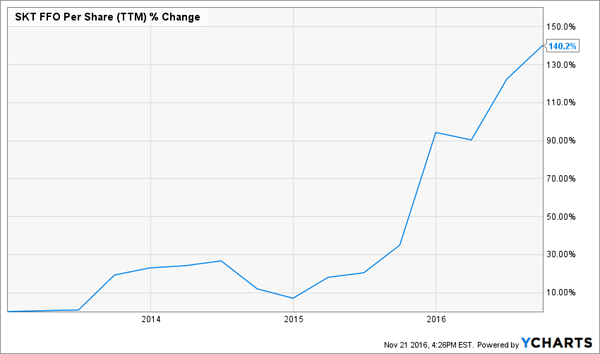 The stock still trades at a reasonable multiple to FFO, but it’s jumped 5.5% in the last five days alone. The time to buy is now.

These five companies are all terrific picks, whether you buy at once or average in. But I’m also watching several other high yielders with even more upside.

In particular, I’m pounding the table on 6 income powerhouses our team just found. They’re all cheap now, and each is set to post double-digit annual gains for years to come.

But that’s not the main reason why I like them. This is: when you combine them into a single portfolio, as our team has done, you get a safe—and growing—8.0% dividend yield!

To put that in context, the five stocks above pay out just 3.2%, on average, so you’d need $1.25 million to get the same level of income!

That’s a lot to invest, just to generate the same amount of cash your local Starbucks barista takes home.

So don’t listen to the pundits who say you need at least a million dollars to have a comfortable retirement. They’re just plain wrong.

Our 8.0% No-Withdrawal portfolio—so named because it lets you generate a solid middle-class income on a modest nest egg (and without having to sell a single stock)—offers a better way.

I’m ready to take you inside this powerful new portfolio now. Simply go right here to get the details on my secret strategy—and the 6 rock-solid investments that backstop it.