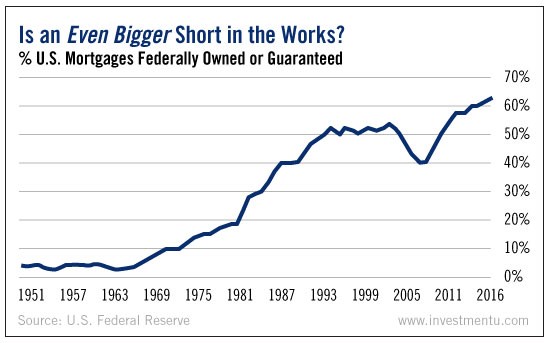 Eight years after the Great Recession, most Americans have at least some understanding of what happened. They know that the economy was wrecked by a confluence of screw ups in the government, the big banks and the housing market.

[ad#Google Adsense 336×280-IA]The housing market is, of course, where it all started.

Thanks to Michael Lewis’ now-famed book and the movie adaptation of the same title, The Big Short, it’s now common knowledge that a big factor in the 2008 collapse was the buildup and securitization of subprime mortgages.

Our government has enacted a host of policies to help the nation recover from the recession. In many ways, they’ve worked. Unemployment went from near 10% to less than 5%. Stocks have been in a historic bull market ever since they bottomed out in 2009.

But this week’s chart evokes a troubling question. Did we ever really fix the housing market? It’s an especially pertinent concern now that interest rates are finally recovering from their Great Recession lows. And as you can see, the answer is… not exactly.

The proportion of federally owned or guaranteed mortgages has actually increased since the eve of the financial collapse.

To put it another way, the majority of mortgages in America carry no risk of nonpayment to the lender. That means they have less strict credit requirements than private loans.

This is great for people in the realty and mortgage businesses. They can sell all they want with no risk! And, in the short term, it makes matters easier for homebuyers, too.

But for our financial system, it’s a sign that we never learned our lesson after 2008. And with interest rates on the rise again, adjustable-rate mortgage defaults could rise like they did a decade ago.

Back then, a lot of people were being approved for mortgages they couldn’t afford. And mortgage writers went along with it because about half of all mortgages were guaranteed by the government.

Now, as the chart shows, that guarantee is extended to nearly 65% of all mortgages.

To be clear, that’s not to say nothing has changed. New banking standards and practices now ensure that financial institutions don’t become overleveraged. And we have new oversight organizations to crack down on shady banking practices.

But meaningful reforms to our country’s housing market never materialized. As rates rise over the next couple of years, watch for signs of weakness in the housing market.

And if you’re an American homeowner, remember… someday, there could be an even bigger short.