We opened one of our DailyWealth Trader (DWT) issues with those words last November.

[ad#Google Adsense 336×280-IA]”We’re about to suggest buying a stock that might make you gag… or worse. And as you’ll see, that’s a good thing.”

Now, one year later, the stock we recommended is up more than 60%. But as recently as September, we were sitting on a much smaller gain. Shares had fallen roughly 30% from their mid-April high.

Because of the way we traded the company, though, we were able to avoid stopping out along the way. And that has set us up for huge profit potential going forward.

Today, we’ll review our trading strategy and discuss a few of the most important concepts in successful speculation…

The company we’re talking about is ultra-low-cost air carrier Spirit Airlines (SAVE). Let’s start with the trade setup. Here’s what we said in our initial write-up…

Despite the negative perceptions lots of folks have toward Spirit, the company is extremely successful. And partly because of those perceptions, the stock is dirt-cheap.

Investors let their emotions influence their decisions all the time. Lots of people have had bad experiences with Spirit… So they wouldn’t even consider buying the stock.

But almost any business is a good buy at the right price. So when you know your friends would say you’re crazy to buy a certain stock, it’s worth investigating…

Last November, Spirit’s sales and earnings were growing more than 10% per year. Its profit margins were getting larger. And its earnings per share were growing at more than 30% per year. That’s an impressive performance. Yet the stock traded with an EV/EBITDA (an alternative to the common price-to-earnings ratio) of just 4.4.

My colleague Steve Sjuggerud has built an excellent long-term track record by buying assets that are “cheap, hated, and in an uptrend.” It’s a great trading framework.

Spirit was cheap and hated last November… But it wasn’t in an uptrend yet. Below, you’ll see what the chart looked like at the time of our recommendation. It had just dropped 60% in less than a year… 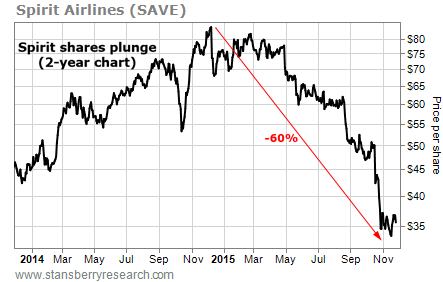 At the time of our recommendation, Spirit had traded sideways for about a month. So it wasn’t in freefall. But buying an asset before it begins an uptrend comes with added risk.

The problem was, after a big drop to such a cheap price, we didn’t want to wait around on the sidelines. We knew Spirit stood a good chance of rallying sharply off of its lows. (And that’s exactly what it did.)

But we didn’t throw caution to the wind. We used a combination of two strategies to reduce our risk. First, we used a wide, 33% hard stop. And second, we used a small, one-third position size…

A wide stop loss allows you to hold on to a position you like, even if your timing isn’t perfect. A small position size helps you endure (psychologically) a lot of volatility, which you need to expect when you buy a small stock after a massive drop.

When you use the two trading strategies together, you get the added benefit of risking a relatively small amount of capital. Using a 33% stop on a one-third position size gives you the same risk as 11% of a regular-sized position.

I love this approach to speculating. If you’re wrong, you lose a little. If you’re right – and the asset begins an uptrend – you can add to your position later… without increasing your overall risk.

Spirit rallied right out of the gate. Just two weeks after our trade, we were up 23%. Two and a half months into the trade, Spirit had established an uptrend (a series of higher lows and higher highs)… And we were up more than 24%.

We used the opportunity to buy another one-third position. Here’s what the chart looked like then… 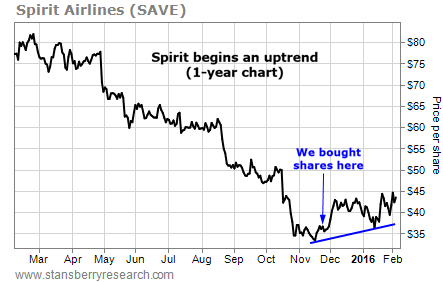 At the same time that we doubled our position size, we tightened our stop loss from 33% below our initial purchase price to 20% below our latest purchase price. This kept our overall capital at risk to about 10%-11% of a regular-sized position.

We increased our profit potential without increasing our risk. And we left plenty of “wiggle room” for price swings. That turned out to be critical…

Spirit continued higher after we added to our position. But the stock has been volatile. Just a couple of months ago, Spirit traded as low as $37.23… or 16% below our second purchase price. Had we used a tighter stop loss, that would have been the end of the trade.

But Spirit has continued to post strong business results. Last quarter, its sales hit an all-time high of $621 million (for the quarter). Its 13.9% profit margin was one of its largest ever. And its $86 million profit for the quarter was the company’s second-best.

On Friday, Spirit shares hit a 15-month high of $56.25. We’re now up 60% on our initial position and 27% on the second position. On the combined position, that’s 44%. We don’t want to give back all of those gains, so we tightened our stop loss again. 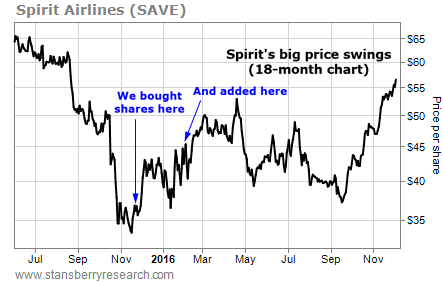 By tightening our stop loss to our most recent purchase price of $44.43, in the worst-case scenario, we should close the combined position for at least a 13% gain.

In the best-case scenario, Spirit will pull back a little and continue its uptrend. In this case, we may add a final one-third position… and profit on Spirit’s continued growth.

Airline stocks go through big booms and big busts… which means they can be great speculations. Last November, we said that Spirit shares could double or more within two years. Now, we’re more than halfway there in about half the time.

And as we showed you today, this would have been impossible without a proper trading strategy. It’s critical to keep these ideas in mind when you’re speculating.