The word conjures images of golf, travel, and relaxation.

But I think that’s the case because “retirement” is typically thought of as the capstone of a lengthy career, as one sails into the sunset.

One is a bit worn out and older. And so easy-going activities is par for the course.

However, as someone who became financially free at 33, I believe retirement is becoming a totally different concept to a lot of young people.

[ad#Google Adsense 336×280-IA]First, the idea that one can just work for the same firm for 30 or 40 years and then collect a pension and a gold watch is pretty much non-existent.

Instead, we’re in a gig economy, where technology and economic changes have totally reshaped the dynamics of work.

But whereas some might look at this as a setback, I see it all as an incredible opportunity.

Instead of working your whole life only to finally retire in your 60s (if ever), one is instead able to pursue multiple passions and ideas at a young age, circumventing the need to retire in the first place.

Moreover, it’s perhaps easier than ever to generate enough passive income to cover your bills, rendering you financially free.

By aggressively saving, I was able to come up with enough capital to regularly invest in high-quality dividend growth stocks like those you’ll find on David Fish’s Dividend Champions, Contenders, and Challengers list.

Mr. Fish’s list is a fantastic resource for investors looking for high-quality stocks that reliably pay and increase dividends, as it contains pertinent information on more than 700 US-listed stocks that do just that.

I invest in high-quality dividend growth stocks because they typically represent equity in wonderful businesses that share their growing profit with shareholders in the form of growing dividends.

After all, growing profit is great. But as a shareholder and part-owner, I want my fair share of that. Growing dividends are that fair share.

The result of all my saving and investing in high-quality dividend growth stocks is my Full-Time Fund (named so because it works full time so I don’t have to).

This is my real-life, real-money portfolio that generates enough dividend income to cover most of my core personal expenses. When combined with other sources of passive income, I’m financially free.

As you can imagine, I’m not looking forward to “retirement”. I’m kind of already there, to be honest. But it’s not necessary to look forward to the twilight of my life to do what I want, because I’m able to do so already.

The best part about this is that anyone can do this.

You can do this!

But one has to take action.

And that’s what today’s article is all about.

I’m going to discuss a stock on Mr. Fish’s list that appears to be a good deal for investors.

Well, I believe the stock in question is undervalued.

That means the price being asked is less than it’s likely worth.

Buying high-quality dividend growth stocks when they’re undervalued can be an incredible boost to one’s income and long-term total return prospects, all while reducing how much risk one takes on.

All else equal, a lower price will result in a higher yield.

And this all helps one’s long-term total return prospects, as yield is a major component to total return.

The other component is, of course, capital gain. And capital gain is also positively impacted by virtue of the upside that exists between the lower price paid for a stock and the higher intrinsic value.

If that gap closes, that’s profit. And that’s on top of whatever long-term capital gain that’s possible as a company increases its profit and becomes worth more.

In addition, you introduce a margin of safety when you pay less, as paying less acts as a shock absorber.

In case the company does something wrong and becomes worth less, you’ve built in that margin of safety.

But in order to know what a dividend growth stock is worth, you first much go through the process of valuing it.

Mr. Knapp takes something complicated (valuing dividend growth stocks) and makes it easy. If you haven’t already checked the guide out, it’s definitely worth your time to do so now.

With these benefits in mind, you can see why buying a high-quality dividend growth stock when it’s undervalued is such an intelligent long-term maneuver.

As promised, I’m going to discuss a dividend growth stock that appears to be undervalued right now…

Visa Inc. (V) is a worldwide payments technology company that connects consumers, banks, governments, and businesses in more than 200 countries to a fast and secure electronic payments system.

This remains one of my favorite businesses in the world, and I’m a happy shareholder.

Digital payment is safer, faster, easier, and more beneficial. It provides benefits to both the entity paying and the entity collecting.

And Visa is fantastically positioned to capture the lion’s share of that increasing business.

We can already see the growth happening in real-time, as I’ll share.

The company has increased its dividend for nine consecutive years.

With a payout ratio of just 26.6%, there’s still room for plenty more where that came from.

The only real potential drawback to the dividend metrics is the yield.

At just 0.82%, investors are sacrificing a bit of current income for the promise of great dividend growth down the line.

Of course, Visa has delivered. And I bet they continue to deliver. But a stock like this should probably be balanced with higher-yielding options in a portfolio.

Nonetheless, that current yield is still more than 20 basis points higher than the stock’s five-year average yield of 0.6%.

So while low, it’s still higher than what it’s typically been, on average, over the last five years.

But in order to determine what kind of dividend growth to expect going forward, we need to know more than just the payout ratio.

We need to look at what kind of underlying growth the business is generating.

For that, we’ll first look at what Visa has done over the last eight years. (I typically use 10-year growth information, but Visa went public in 2008. So I’ll be looking at data from FY 2009 onward.)

And we’ll then compare that to a near-term forecast for future profit growth.

Taken together, we should have a pretty good picture of what’s going on and what to expect.

A rather substantial reduction of the outstanding share count can explain much of the difference, as Visa has reduced its count by approximately 20% over this relatively short period of time.

We can see how Visa’s been able to hand out such massive dividend increases while simultaneously keeping the payout ratio fairly low: Visa is growing at a rapid clip.

Is that set to continue?

S&P Capital IQ certainly believes so. They’re forecasting 17% compound annual growth for Visa’s EPS over the next three years, which would be right in line with what see above.

The rest of the company’s fundamentals are equally impressive, in my view.

But that’s only because the company decided to acquire Visa Europe, which now gives it complete ownership over its European business. Of course, they had to fund part of that acquisition with debt.

So whereas Visa has been a debt-free company for the majority of time that it’s been public, it’s not anymore.

However, we’re still looking at a great balance sheet.

The long-term debt/equity ratio is sitting at 0.48, while the interest coverage ratio is over 26.

ROE has risen recently with the addition of debt, but we have to consider that the above metric mostly extends over a period where the company had no debt.

Overall, I think there’s just a lot to like here.

And as transactions rise, Visa will likely continue to capture much of that increasing business.

In addition, inflation protection is built right in.

Since Visa earns a percentage of each transaction, price hikes all over the world will naturally drop to Visa’s bottom line.

That’s because Visa can scale so incredibly. It takes no resources to process a higher-value transaction, even though the amount of money collected is higher. The scalable nature of the business extends to total transactions, too.

We might expect Visa’s stock to come at a premium, but I’d argue it’s actually cheap right now…

The P/E ratio is 32.28. That’s certainly a premium to the broader market, but Visa is growing much faster than the average company in the S&P 500.

I valued shares using a two-stage dividend discount model analysis. The two-stage model is used because of Visa’s low yield. I factored in a 10% discount rate. And I assumed a 20% dividend growth rate for the first ten years, and a long-term dividend growth rate (beyond that) of 8%. This is on the high end of what I normally use, but Visa’s extraordinary growth and potential warrants it. The low payout ratio and high underlying profit growth means Visa could grow its dividend well into the double digits for many years. The DDM analysis gives me a fair value of $96.07.

I like to average these three valuations together, which blends these different viewpoints and methodologies together. It should provide for balance and accuracy. The averaged valuation is $92.09, which isn’t too far from what I came up with. That would imply this stock is potentially 14% undervalued. 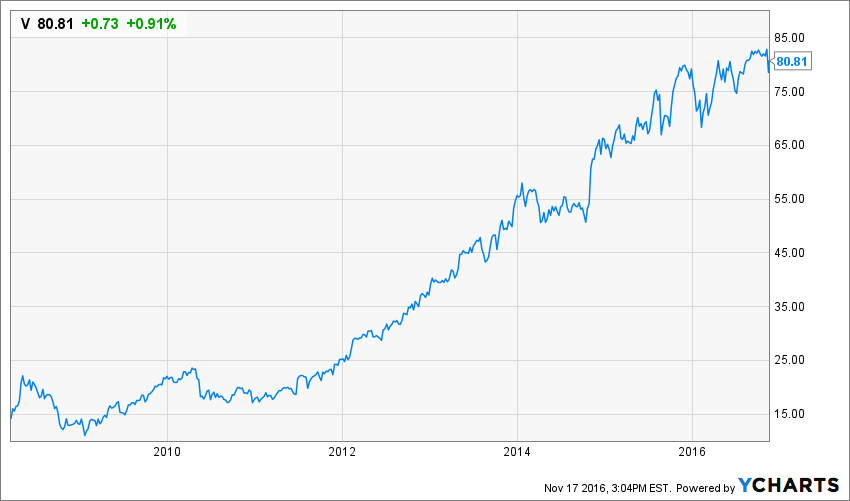 Bottom line: Visa Inc. (V) is one of the highest-quality companies in the world. Incredible competitive advantages, including its scalable nature, and increasing digital payments all over the world are great reasons to own a slice of the company. The possibility for 14% upside is another great reason on top of that. I view this stock as one of the best long-term investments available for dividend growth investors.