So the election is all over and we have a new president-elect.

While chaos in the market was expected, I didn’t notice all that much volatility immediately after.

Sure, some stocks were up far more than normal; others were down far more than usual. The market as a whole was actually up nicely the day after.

[ad#Google Adsense 336×280-IA]But all of this is exactly why I’m a long-term dividend growth investor.

Regardless of who’s in office, the odds are pretty good that great businesses are going to continue being great.

And one of the best yardsticks to measure greatness is a company’s track record for paying and growing a dividend.

The ability and penchant for growing dividends is one of the best litmus tests for quality I know of.

After all, I’d rather see proof of ever-growing profit than just hear about it. Money in my pocket is far more useful than lip service.

Moreover, growing dividend income allows me to ignore the noise of what’s going on in the market.

Stocks go up and stocks go down.

But the dividend income my personal portfolio generates for me is very likely going to be higher next year, the year after, and every year thereafter.

That’s because I focus on high-quality dividend growth stocks like those you’ll find on David Fish’s Dividend Champions, Contenders, and Challengers list, which is a compilation of more than 700 US-listed stocks with at least five consecutive years of dividend increases.

However, while many stocks on Mr. Fish’s list represent equity in wonderful businesses, this is just raw data.

It’s up to the investor to separate the best businesses from the also-rans.

Now, price is easy information to ascertain. One simply needs to pull up a stock quote to find out how much a share goes for.

But that tells you almost nothing.

The far more valuable piece of the puzzle is value.

After all, price is simply what you pay for a stock. Value, though, is what that stock is actually worth.

It takes what is potentially difficult – valuing dividend growth stocks – and makes it relatively easy.

The reasoning here should be painfully obvious: you don’t want to pay $50 for a stock worth $10.

But it actually goes deeper than that.

A long-term investor should be on the lookout for opportunities to buy high-quality dividend growth stocks precisely when they’re priced less than they’re worth.

Said another way, one should aim to scoop up high-quality dividend growth stocks that are undervalued.

This is, of course, relative to what the same stock would offer if it were fairly valued or overvalued.

First, price and yield are inversely correlated. All else equal, a lower price will equal a higher yield.

That’s because yield is one of two major components of total return. This higher yield also means more ongoing income from the investment, both now and later.

Meanwhile, the other major component to total return is capital gain.

And that component is also positively impacted by virtue of the upside that should exist between the lower price paid for a stock and the higher value of it.

While the stock market isn’t often very good at recognizing value over the short term, it tends to be pretty good at it over the long run. Positioning yourself for that recognition by taking advantage of short-term folly is usually to an investor’s benefit.

This all works to lower one’s risk.

Paying much less than a stock is worth gives you a margin of safety. In case something goes wrong, you have a “cushion” already built in.

If the value of a business is lowered due to an unfavorable event, that comes out of your cushion rather than out of your pocket. That’s where you want to be.

With all of this in mind, I’m always on the lookout for high-quality dividend growth stocks that are undervalued.

AbbVie Inc. (ABBV) is a global pharmaceutical company with a particular focus on immunology and oncology.

AbbVie is likely most known to consumers by its blockbuster drug Humira, which accounts for more than half of the company’s revenue and profit.

Speaking of golden eggs, AbbVie’s stock continues to pay growing dividends, which can be thought of as golden eggs in their own right.

The company has paid out increasing dividends for five consecutive years.

However, AbbVie is a special case, as it was spun-off from parent company Abbott Laboratories (ABT) in 2013. The combined company had a multi-decade record of growing dividends under its belt, so the five-year streak here should hold more weight than usual, in my opinion.

And with the most recent dividend increase coming in at over 12%, the aggressive nature of the dividend growth continues.

That thesis is supported by a payout ratio of 68.8% that’s slightly high but still has room.

But what’s perhaps most appealing about the dividend is the yield, which is 3.94% right now.

That’s almost twice as high as the broader market. And it’s certainly pretty attractive in a low-rate environment.

Now, future dividend growth for AbbVie will largely be dependent on what kind of underlying profit growth they can deliver, especially considering the elevated payout ratio.

In order to get a gauge of what to expect going forward, I like to look at what a company’s done over the past decade, and then compare that to a near-term forecast.

This is obviously impressive stuff here, which warrants and validates the recent dividend increase in the low double digits.

Looking forward, S&P Capital IQ is calling for 15% compound annual growth for AbbVie’s EPS over the next three years, which would be a nice acceleration from what we see above.

S&P Capital IQ sees greater penetration in emerging markets for Humira and a strong pipeline for AbbVie. However, this is tempered somewhat by the expiration of Humira’s patent at the end of this year. Although AbbVie believes it can protect Humira from biosimilar competition through 2022, this is a potential concern to be aware of.

One piece of the fundamental picture that I’d like to see improved is the balance sheet.

AbbVie has a long-term debt/equity ratio of 7.41, while the interest coverage ratio is just over 10.

The company’s debt load has expanded recently as it’s been acquisitive, but I’d personally like to see them settle in a little and work away at the balance sheet.

However, the profitability is outstanding.

The ROE is juiced by the debt, but the net margin is otherwise really strong.

You’ve got massive profitability, impressive growth, a ton of potential, and a big dividend that’s growing.

But I see some things that aren’t so likable, including the debt load and reliance on one drug.

As such, I think AbbVie is higher up on the risk-reward scale.

Nonetheless, this strikes me as a very worthwhile investment at the right price.

Is the price right?

The stock is trading hands for a P/E ratio of 17.47. That’s well below the broader market. And it also compares quite favorably to most peers out there.

What, then, might the stock be worth? What’s the estimated fair value?

I valued shares using a dividend discount model analysis. I factored in a 10% discount rate. And I assumed a long-term dividend growth rate of 6.5%. That growth rate is on the lower end of what I normally assume, but I’m being conservative here, as AbbVie’s payout ratio is a bit high. And the company’s reliance on Humira is risky. The DDM analysis gives me a fair value of $77.90.

So the stock looks quite cheap here, even looking at it through a pretty conservative lens. But what about some added perspective? Let’s see how my valuation compares to some professional analysts’ opinions.

Morningstar ranks ABBV as a 4-star stock, with a fair value estimate of $73.00.

I came in pretty close to what Morningstar believes it’s worth, while S&P Capital IQ is arguably being a bit aggressive (likely factoring in that 15% growth rate). Nonetheless, I like to average these different opinions out, as I believe that concentration improves accuracy by blending everything together. That averaged valuation is $80.40, which would indicate the stock is possibly 24% undervalued. 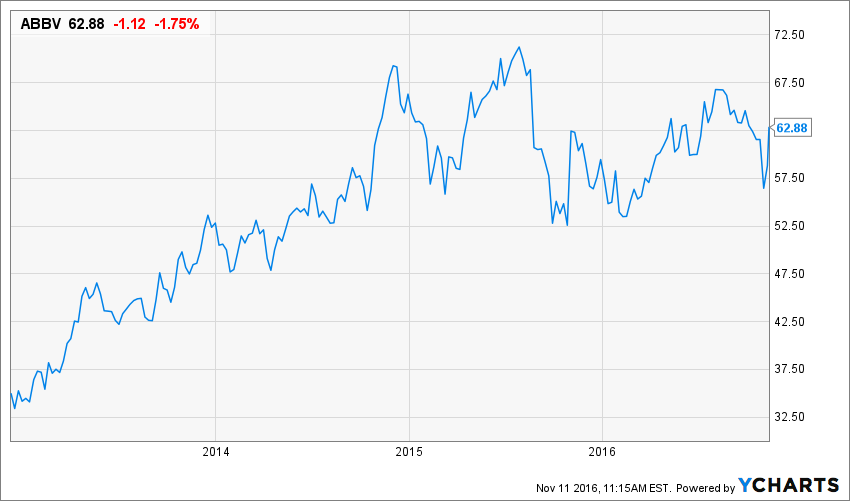 Bottom line: AbbVie Inc. (ABBV) has a blockbuster drug that is generating outstanding results. And recent acquisitions gives the company a robust pipeline. I added to my position in AbbVie before its recent pop, as I noted on my social media accounts. However, the stock still appears to offer 24% upside, even with some conservative estimates. If you’re looking for big upside and a big dividend, this stock appears to offer both.