It has been an emotional couple of weeks for people in the U.S.

First, the World Series divided the nation into Chicago and Cleveland fans. Then, earlier this week, the presidential election tested their wills.

[ad#Google Adsense 336×280-IA]So as a resource investor, you need to be selective.

Today, I’ll show you the best of the bunch…

The closest things to “buy and hold” in the resource market are royalty companies.

Instead, they finance lots of mining projects at various stages of completion, then earn revenue streams (or “royalties”) on mine production if things work out.

In the October 7, 2015 Growth Stock Wire, I explained why precious metal and energy royalty company Franco-Nevada (FNV) was my favorite of the group. 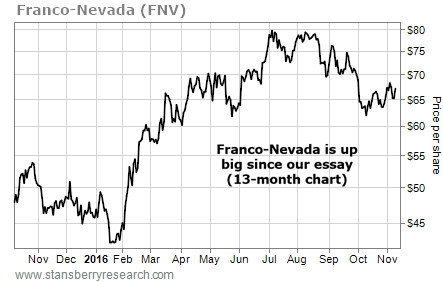 Part of that is because royalty companies are less risky bets than gold miners. In general, miners own a handful mines. Royalty companies, on the other hand, own stakes in the production of many mines. So one mine shutting down hurts the cash flows of miners far more than it does for royalty companies.

The other reason Franco-Nevada is a top royalty company is because its management is world-class.

One of the royalties Franco-Nevada added was a silver stream on the Antamina copper and zinc mine in Peru. Diversified metal producer Teck Resources operates the mine.

Antamina has been in production since 2001 but has a long way to go. Franco-Nevada purchased Teck’s interest in all of the silver at Antamina for $610 million.

At today’s prices, Franco-Nevada will get nearly all of its investment back when Teck produces the reserves (the silver in the ground that Teck can produce at a profit). It will effectively get the resources (the silver that exists but may not yet be profitable) for free… And Antamina has two times more resources than reserves.

This was Franco-Nevada’s first pure silver stream. So far, so good… In the first nine months of this year, Franco-Nevada earned 25% more ounces than it expected to generate in all of 2016.

Franco-Nevada’s investment in Antamina is a great example of a management team that knows what it’s doing and is making smart deals… at the right time and for the right price.

It’s also a great example of why we like the royalty model so much.

If you’re like me and believe we’re in the early stages of a huge bull market in precious metals, pick up shares of Franco-Nevada (FNV) today.