The New York Times recently published leaked information from Donald Trump’s 1995 tax returns. Both politics and finance enthusiasts were stunned by his use of a $916 million loss to avoid paying taxes for up to 18 years.

That’s not some shady loophole; it’s a basic part of our tax code.

You may not have a billion dollars to lose like Trump, but many investors can take advantage of a similar strategy.

What Is Tax-Loss Harvesting?
In simple terms, tax-loss harvesting refers to selling investments at a loss and then buying them back. It allows you to maintain your long exposure to beaten-down stocks. But it also lets you deduct that temporary loss from your taxes.

When done right, that deduction is big enough to cancel out your capital gains tax and more.

Unfortunately, it’s not as simple as just hitting “sell” and then “buy” within a few seconds. (If it were, what investor would ever pay taxes?) The IRS has regulations on buying back recently sold assets to try to prevent tax-loss harvesting.

If you sell a stock and then buy back an identical or obviously similar stock within 30 days, you’ve executed what’s known as a “wash sale.” That means that you can’t deduct the loss from your taxes.

But with a bit of cleverness, we can easily – and legally – work around wash-sale rules. Let’s start with the simplest method…

Waiting Out the Wash Period

OK, this one isn’t really that clever. The easiest way to avoid the penalty on rebuying within 30 days is… waiting 30 days. But this technique is advisable only for certain investments.

For example, it’s a bad idea to use “slow” tax-loss harvesting with a rapid gainer like Netflix (Nasdaq: NFLX). If you sold after the stock dipped in mid-September, waited out the wash period, and then bought today, you’d be in the red.

That’s why it’s better to focus on steadier low-volatility stocks.

Think of this strategy as a sort of short position that gives you tax benefits. You’re just using shares you already own – instead of borrowing them from a broker.

Of course, some investors may not have the patience to buy back stocks 30 days after selling. Maybe tax day is coming up and you need your tax-loss harvesting done now. Or maybe you’re smart enough not to have long exposure to any negative-return stocks…

There is a faster way to do legal tax-loss harvesting. But, once again, it’s not appropriate for all investments. And it comes with a little bit of added risk.

The Short-Term Switcheroo
Technically, wash-sale rules apply only if you sell stocks at a loss and then buy identical or substantially similar stocks within 30 days. The italicized part provides a loophole that can be used to tax-loss harvest some funds.

You can sell the SPDR shares and then immediately buy a rival S&P 500 ETF like the Vanguard S&P 500 ETF (NYSE: VOO). Yes, they’re quite similar. They’re both designed to do the same thing. But they’re not substantially similar under the legal definition. 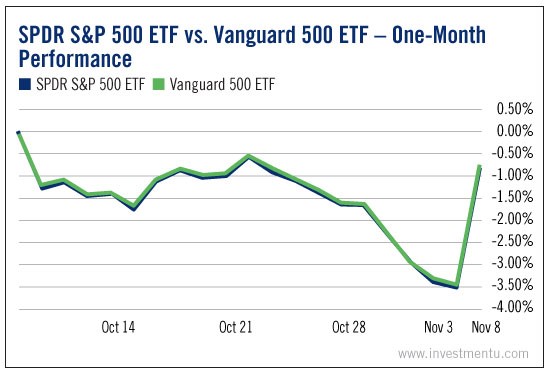 The two funds track the same index. But they look different on the inside. They use different asset management strategies. And that’s why there are a few tiny differences between their prices.

As you might imagine, “fast” tax-loss harvesting is generally just for ETFs. Trying to pull this off with an individual stock could end badly – especially if the IRS doesn’t agree with your personal definition of “substantially similar.”

Tax is already a big burden on many investors. You may not have the resources to pull off an elaborate tax avoidance scheme like Trump, but through careful and legal tax-loss harvesting, you can minimize your portfolio’s output to Uncle Sam.