Here’s an updated look at the chart of copper… 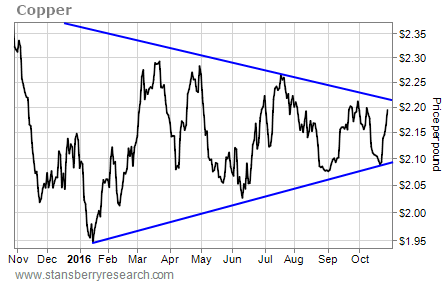 Buying copper last week as it tested the support of its consolidating triangle pattern was a low-risk trade. And as it turned out, it generated a solid profit in just one week.

Check out this chart of wheat… 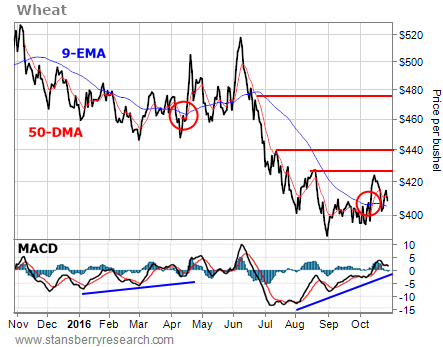 This chart displays the price of a one-month futures contract for 100 bushels of wheat. At Friday’s closing price of $408.50, wheat is trading near its lowest price in 10 years. But some signs point to a reversal and a possible rally.

As the price of wheat has been chopping back and forth in a low-level consolidation, the MACD indicator has been moving higher.

This is often an early warning sign of an impending rally.

This “bullish cross” often kicks off the start of an intermediate-term rally phase.

Look at the chart again… You’ll notice we saw a similar setup back in mid-April. That setup marked a short-term bottom in the price. Wheat then went on to gain 11% over the next two months.

The current setup looks even better.

The positive divergence is stronger. The consolidation range is more compact – which increases the potential energy on a breakout of the trading range. And if wheat can rally above the resistance line at $440, it’s a straight shot up to the next resistance level at about $475.

That would be a 16% gain from Friday’s closing price.

On the other hand, if this chart breaks down, traders can exit the position if wheat trades below its recent low at about $393. That’s just 3.8% of downside.