We’ve all got bills, right?

Gotta have a roof over your head, food in your belly, and electricity to power your home. So on and so forth.
Just the basics alone can add up to quite a bit.

So we’ve all got jobs to pay for those necessities, right?

[ad#Google Adsense 336×280-IA]Bills might be unavoidable, but jobs certainly are not.

One simply has to figure out how to generate an income without working.

There are a number of methods that exist to serve this purpose.

But my favorite method is dividend growth investing, which involves buying and holding shares in high-quality businesses that pay growing dividends year in and year out.

I’ve used this method to build the real-life, real-money portfolio that currently generates growing dividend income that covers most of my core personal expenses.

Dozens of great businesses are out there selling real products and/or real services to real people, generating real profit, which turns into real dividend income for me.

Now financially free at 33, I’m able to live life on my terms.

While this may sound like the stuff of late-night infomercials, it’s actually not.

This is not a get-rich-quick scheme. There’s no 1-800 number to call. I’m not soliciting anything.

Perhaps worse yet, there’s a lot of work involved.

You have to work hard and live below your means in order to generate the ongoing capital necessary to regularly invest in high-quality dividend growth stocks in the first place.

And you then have to identify the right businesses at the right price.

The first part of that equation is a lot easier than it used to be, however.

For instance, David Fish’s venerable Dividend Champions, Contenders, and Challengers list takes a lot of the guesswork out of the equation, as it has compiled pertinent information on more than 700 US-listed stocks, all with at least five consecutive years of dividend increases.

And that’s for good reason: great businesses tend to be well-known businesses, and they tend to generate a lot of growing profit, which can be used to fund growing dividends.

The second part of the above equation, which is identifying the right price for a business, is also a lot easier than it used to be.

Fellow contributor Dave Van Knapp put together a valuation guide a while ago as part of his overarching series of lessons on dividend growth investing.

But while it might be easy to understand why you want the right business, why is the right price so important?

Well, buying a stock is just like buying anything else in life.

There’s the price you pay. And then there’s the value you get. Oftentimes, the lower the former, the greater the latter.

This is an important concept to grasp, because it may very well have a major impact on your wealth and income over the long run.

Another way to look at it is that a stock will be either fairly valued, overvalued, or undervalued at any given time.

It’s that last scenario – undervaluation – that you want to shoot for.

That’s compared to buying the same stock at fair value or above.

It’s easy to see how this works.

All else equal, a lower price will equate to a higher yield. That’s because price and yield are inversely correlated.

This higher yield not only impacts your current and ongoing dividend income but also your total return. That’s because total return is comprised of yield and total return.

But your total return is positively impacted by not just the higher yield; indeed, the upside that exists between the lower price paid and the higher intrinsic value of a stock exists as upside, a gap which is likely to close and add to the long-term upside that already exists as part of a high-quality business normally becoming worth more over time.

And this all works to lessen your risk.

You’re putting additional yield and upside to work for you.

And you’re paying less for the privilege.

With all this in mind, one can see why it’s so wonderful to come across a high-quality business whose shares are being sold for less than they appear to be worth.

Well, that might be exactly what we have with one dividend growth stock in particular…

Walt Disney Co. (DIS), together with its subsidiaries, operates as a global diversified media and entertainment conglomerate.

Remember what I mentioned earlier about how great businesses tend to be well-known businesses?

Well, that case is rarely (or never) proven more clearly than with Disney.

Disney is perhaps most well-known for its theme parks.

But it’s actually incredibly diversified across media and entertainment.

Sure, there are the theme parks across the world. Walt Disney World in Florida. Disneyland Park in California. Disneyland Paris in France. Shanghai Disney Resort in China. You get the picture.

But the company also owns produces some of the most valuable film franchises in the world. Think The Avengers, Frozen, and Star Wars: The Force Awakens.

In addition, they own one of the four major television broadcast networks in the US, in ABC. That’s in addition to numerous affiliate stations.

Of course, there’s also the crown jewel: ESPN. ESPN is one of the most recognized cable networks in the world, and it’s part of Disney’s Media Networks business segment, which generated just over 44% of last fiscal year’s revenue.

That’s all on top of a vast licensing business, which takes advantage of a massive library of intellectual property. That IP includes characters like Darth Vader, Mickey Mouse, Little Mermaid, and Iron Man.

Oh, and add in some cruise lines for good measure.

It’s really just an incredible business, in my opinion. And I’m a very happy shareholder.

But I wouldn’t be so happy if I weren’t collecting my fair share of profit in the form of growing dividend.

Fortunately, that’s definitely not the case with Disney.

Although Disney decided to keep its dividend static during the depths of the financial crisis, they’ve made up for lost ground with gusto: the five-year dividend growth rate stands at 31%.

And with a payout ratio of just 25.5%, there’s still plenty of room left for future dividend increases.

The one potential drawback to Disney’s stock regarding the dividend, though, is the yield.

At just 1.52%, there’s a lot to be desired there for investors who are in need of more current income. Of course, that yield is a touch above the five-year average for the stock.

So now that we see what we’re working with insofar as Disney’s dividend is concerned, let’s take a look at the rest of the business.

We’ll first see what Disney has done over the last 10 years in regards to revenue and earnings per share growth, and then compare that to a near-term forecast for EPS growth.

This will tell us where Disney has been, as well as where it might be going, which will help us immensely when it comes time to value the business.

The discrepancy between top-line and bottom-line growth is due to a combination of improving profitability and a strong buyback policy.

For perspective, Disney impressively reduced its outstanding share count by approximately 18% over the aforementioned period

Looking out over the next three years, S&P Capital IQ believes Disney will compound its EPS at an annual rate of 11%. This is obviously not terribly far away from what Disney has produced over the last 10 years.

Moving to other fundamentals, Disney’s balance sheet is stellar.

The company’s long-term debt/equity ratio is 0.29, while its interest coverage ratio is over 53.

While rising interest rates continue to be a concern for a number of companies out there, Disney’s relative lack of leverage puts them in a great position for the long term.

Profitability, as noted earlier, has improved dramatically over the last decade, and it’s now quite strong across the board.

Disney remains one of my favorite businesses in the world.

The company is high quality from top to bottom, they’re broadly diversified, and the IP is really the envy of the media world.

With all of that to like, the stock is likely to be expensive, especially in what’s considered to be an expensive market.

However, the stock actually appears to be cheap right now…

The stock is trading hands for a P/E ratio of 16.80, which is not only well below the broader market but also substantially below the stock’s own five-year average P/E ratio of 19.3. Investors are also currently paying much less for the company’s cash flow than they have, on average, over the last five years. That’s in addition to the fact that the yield is higher than its recent historical average.

A business this high quality going for so much less than the market? That smells like opportunity. But what, then, might intrinsic value be?

I valued shares using a two-stage dividend discount model analysis. This two-stage model accounts for the low yield and high growth rate. I factored in a 10% discount rate. I then assumed a 18% dividend growth rate for the first 10 years, which is very reasonable when considering the low payout ratio, recent historical dividend and EPS growth, and forecast for growth moving forward. The terminal dividend growth rate I assumed is 7%. The DDM analysis gives me a fair value of $123.52.

My viewpoint is that Disney’s stock appears to be significantly undervalued, which is consistent with the gap between the current P/E ratio and what the stock has usually commanded over the last five years. Since no major slowdown in growth is apparent, that gap seems unwarranted. But am I the only one who feels this way?

S&P Capital IQ rates DIS as a 4-star “BUY”, with a fair value calculation of $100.30.
Three different viewpoints, but all conclude that Disney appears to be worth more than it’s priced at. Averaging the three valuations out gives us a final figure of $119.27, which would indicate the stock is 28% undervalued here. 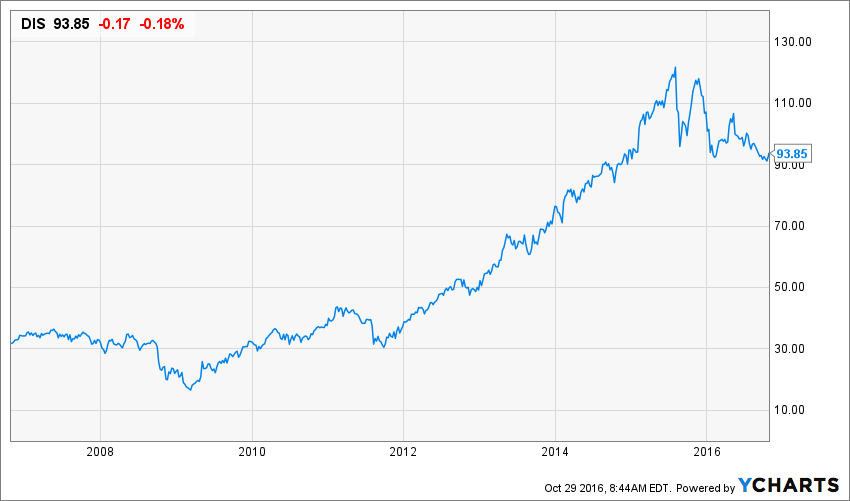 Bottom line: Walt Disney Co. (DIS) is about as high quality and diversified as it gets in the media space – and one of the best businesses in any industry. With the potential for 28% upside on top of the natural long-term appreciation that’s likely to come as the company earns more and becomes worth more, this might be one of the best opportunities on the market. This stock is worthy of strong consideration right now.