Booz Allen Hamilton (NYSE: BAH) is one of the largest federal contractors. It relies on the government for 99% of its revenue.

[ad#Google Adsense 336×280-IA]Yet it can’t seem to keep its employees from walking out of the office with classified information.

But it always recovers within a few months and resumes climbing.

We saw this phenomenon in the summer of 2013, when Booz subcontractor Edward Snowden leaked documents revealing the NSA’s bulk surveillance program. 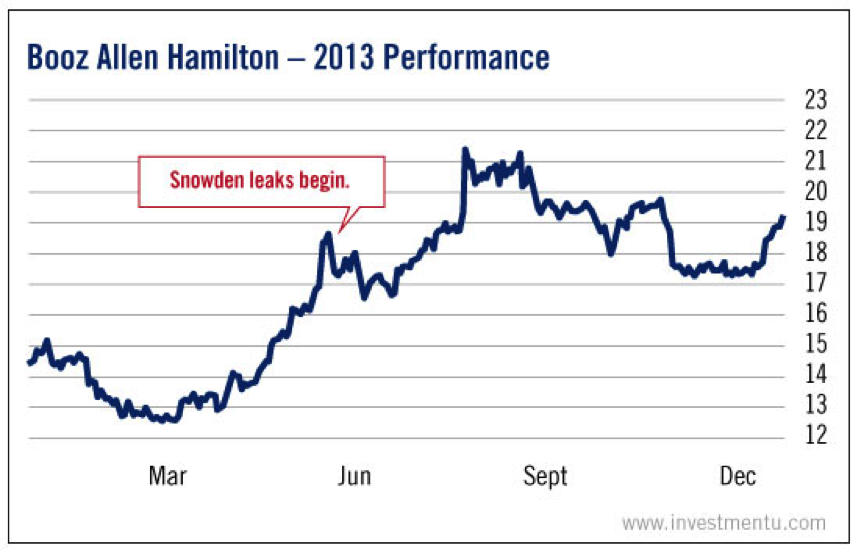 At this point it seems every Booz-related NSA leak is a buying opportunity. And there was just another one.

Last Wednesday, news broke of the arrest of another Booz contractor assigned to the NSA. A 51-year-old programmer from Glen Burnie, MD is accused of stealing classified documents. According to the Justice Department, the leaked information could cause “exceptionally grave damage” to U.S. national security if published.

Let’s look at what that means for investors who are seeking to buy Booz Allen Hamilton stock.

Many Americans know Booz as Snowden’s former employer. This is slightly inaccurate; he was actually a Dell subcontractor assigned to the NSA by Booz Allen. But back in 2013, that didn’t make much of a difference to angry intelligence officials.

In the weeks following the publication of Snowden’s documents, Booz Allen Hamilton stock fell by almost 10%. But soon enough, the stock started rising again. Investors and government clients started to realize that Snowden hadn’t worked directly for Booz. He was a subcontractor of a subcontractor.

As government officials made sense of this confusing web of contracts, their confidence in Booz was restored. And its stock began to soar again.

An investor who bought Booz in mid-June 2013 (the post-Snowden low) and sold earlier this week (the pre-leak high) would have scored 90%-plus gains.

Will the same drop and recovery happen again?

Not Quite a Whistleblower

There are a number of notable differences between the Snowden revelations and this latest NSA leak.

The first does not bode well for Booz Allen Hamilton stock’s short-term performance. Unlike Snowden, the latest “leaker” was directly employed by Booz. This means that the firm can’t use the same “he wasn’t ours” excuse it pulled in 2013.

As a result, the incident hit Booz stock almost immediately. Shares fell 5.5% on Wednesday. It was the largest drop the company has experienced in 2016. 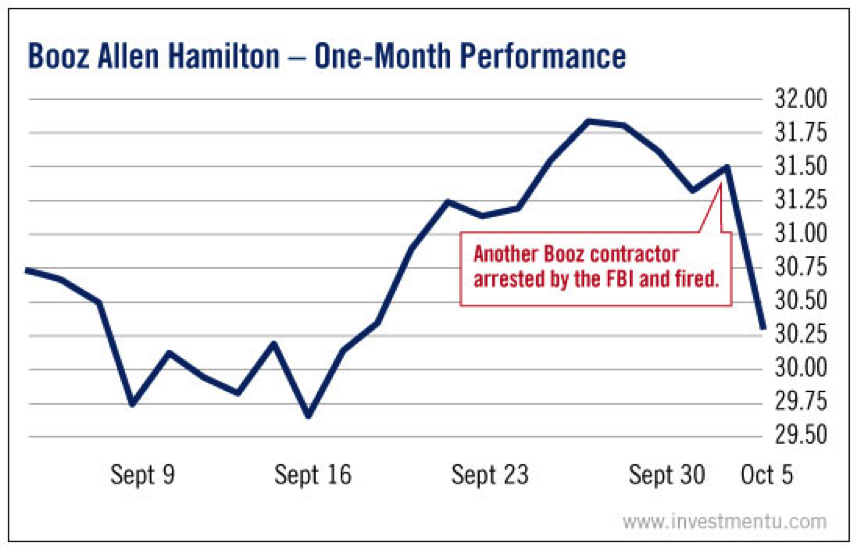 However, another key difference might be Booz’s saving grace. The employee in question is an alleged leaker… but not a whistleblower. His crime is compromising classified information by taking it off NSA premises without permission.

At the moment, there’s no evidence he was politically motivated in taking the information. He also apparently had no plans to publish it. In other words: This could simply be a case of sheer ignorance. He just wanted to work on his classified assignments from home.

The employee didn’t flee the country or contact the press. He is cooperating with the authorities. As a result, the information he stole is unlikely to enter public knowledge.

This means that the downside of this incident to Booz’s government clients is much smaller than the Snowden leaks. This time, unlike in 2013, it got the guy and recovered the sensitive files. Hopefully, this will mean that the Booz sell-off will abate much faster.

NSA leaks are a divisive subject among Americans. Some Americans consider Edward Snowden to be a defender of civil liberties. Others consider him a traitor.

Regardless of your view, one thing is clear. Contractor-related leaks do short-term damage to the contractor’s stock. But in the long term, investors tend to get over it. Those who buy Booz Allen Hamilton stock now are likely getting a valuable equity on the cheap.