If increasing one’s wealth and income were fairly straightforward, everyone would be doing it, right?

If being in a position to retire in your mid-30s were possible, we’d probably no longer have a workforce. Right?

[ad#Google Adsense 336×280-IA]Growing your wealth and income is fairly straightforward.

And I know that being in a position to retire in your mid-30s is possible because I’m in that position.

Yet so few people take advantage of a system that’s easy to access.

We live in a capitalistic society, which has a system that caters to those who work hard and master the power of money.

People all over the world would love to live in the United States, where it’s so incredibly easy to invest in world-class companies that actually pay you to own them.

In many cases, a shareholder is paid to own shares of a business.

You can see what I mean by checking out my personal six-figure portfolio, which is chock-full of businesses that do just that – my portfolio, in fact, is on pace to pay me ~$11,000 in dividend income over the next year.

I invest in dividend growth stocks like those you’ll find on David Fish’s Dividend Champions, Contenders, and Challengers list.

Mr. Fish has compiled information on more than 700 US-listed stocks with at least five consecutive years of dividend increases.

So we’re talking about not only getting paid to own shares in these businesses but getting paid more each year.

How sweet is that?

But there is just a little bit more to it than saving up your money and buying any old stock off of Mr. Fish’s list.

You first want to make sure you’ve taken the time to analyze the business, at which point you feel comfortable in your knowledge of operations, competitive advantages, and fundamentals.

But perhaps just as important, you should aim to buy shares when they’re undervalued.

Just like pretty much anything else in life, stocks have value.

And the price of a stock can be anywhere from well under that value to well over.

If it’s not painfully obvious right away, an intelligent investor wants to pick up shares in a high-quality business when the price of its stock is well under fair value.

That’s relative to what would otherwise be offered if the stock were fairly valued or, worse yet, overvalued.

See, price and yield are inversely correlated. When the price goes up, a stock’s yield almost always goes down. And vice versa.

So the lower the price, the higher the yield will generally be.

That has the effect of providing more money in your pocket both right away and on an ongoing basis.

Of course, this also positively impacts the total return prospects since yield is a major component to total return.

Meanwhile, the other component, capital gain, is also positively impacted by virtue of the upside that exists between the lower price you paid and the higher worth of the stock.

And all of this has a way of lessening the risk, as you’re building in a margin of safety when you pay so much less than that which a stock is deemed to be worth.

It gives you a cushion that wouldn’t exist if you pay more than fair value.

But if it were so easy, everyone would be doing it. Right?

Well, you see where that’s going, don’t you?

Once again, living in a developed country in the year 2016 offers tremendous benefits.

One such benefit is having access to incredible resources that make the process of valuing stocks so much easier than ever before.

A resource like Dave Van Knapp’s lesson on valuing dividend growth stocks is one such example.

With all of this at your disposal, it’s then just up to you to grow your wealth and income.

But I’ll even take it a little further for you by uncovering a high-quality dividend growth stock from Mr. Fish’s list that appears to be undervalued right now.

Apple Inc. (AAPL) designs, manufactures, and markets a variety of consumer electronics, including smartphones, tablets, personal computers, smartwatches, and portable music players. They’re vertically integrated with software and hardware. They also offer a variety of services designed to be used on and for their products.

This company needs no introduction. In fact, it’s very likely you have one of their devices in your pocket right now… or, at the very least, at home.

Apple might not be a bread-and-butter stock for a lot of investors because of the fickle nature of technology.

However, Apple has minted many millionaires over the years, and I find it likely they’ll continue to make a lot of money for shareholders.

But what’s perhaps less known is the company’s propensity to grow its dividend payout to shareholders.

They’ve increased their dividend for five consecutive years now, with a dividend growth rate of 38.9% over the last three years.

So what they perhaps lack in dividend history they’re making up for in growth.

And that growth is even more appealing when considering the fact that the stock yields 2.01% right now.

While that yield is certainly worthwhile in a low-rate environment like we have now, one should want to see solid dividend growth in tandem. Well, we have that here.

And since the payout ratio is sitting at just 26.6%, it seems very likely that Apple will continue handing out sizable dividend raises for the foreseeable future and beyond.

We have a lot to like here with the dividend.

You’ve got a very low payout ratio, a very high dividend growth rate, and a yield that is very respectable in today’s market.

But in order to really get a read on where Apple might continue to go with that dividend, we first must look at the growth rate of the company’s underlying revenue and earnings.

This will help us also later determine what the stock is likely to be worth, too.

We’ll then compare that past growth rate with a forecast for future growth, which will help us home in a solid expectation moving forward.

These are massive numbers here.

However, because of the size of Apple now, Apple’s growth going forward will likely be substantially less.

Now, that’s not to say that Apple still can’t provide meaningful growth. It just won’t be like what they’ve been able to do over the last decade, when they had the advantage of being a much smaller company at the beginning of this period. Moreover, smartphone penetration is substantially higher now than it was a decade ago.

But there’s still a lot of potential here.

Looking out over the next three years, S&P Capital IQ believes that Apple will compound its EPS at an annual rate of 6%. While respectable, that would be a large departure from what Apple’s been able to do in the past. Nonetheless, this can still provide for very strong dividend growth moving forward, as I’ll explain.

[ad#Google Adsense 336×280-IA]First, we must consider that Apple has a ton of cash on the balance sheet.

While much of it is overseas, it still provides the company a ton of flexibility and firepower.

While the long-term debt/equity ratio is good, at 0.45, the interest coverage ratio is an incredible 100.

Moreover, the company has more than $200 billion in cash and equivalents.

Second, we have to consider that the payout ratio, as noted earlier, is very low. So the company could easily grow its dividend at a double-digit pace for years to come.

Profitability is another aspect of the company that’s just really impressive.

Over the last five years, Apple has averaged net margin of 23.35% and return on equity of 39%.

These numbers are even more impressive when considering the leverage.

There’s really a lot to like here with Apple.

Their customers are really sticky, encouraged to stay with the company’s products due to its harmonious ecosystem.

And people are more reliant on technology and communication than ever before, making smartphones and all of the peripherals ubiquitous.

With all of this in mind, we might expect the stock to be expensive.

The stock is trading hands for a P/E ratio of 13.22. Well below the broader market and the stock’s own five-year average P/E ratio of 14.3, there seems to be a disconnect here. You’re getting one of the world’s best and most dominant businesses at a price well below what investors are willing to pay for the market, which surely contains a number of lower-quality businesses.

What, then, might the stock be worth? What’s a fair price to pay?

I valued shares using a dividend discount model analysis. I assumed a 10% discount rate. And I factored in a long-term dividend growth rate of 8%. That growth rate is actually conservative, in my view. When factoring in the very low payout ratio and expected underlying EPS growth rate for the foreseeable future, the payout ratio would barely move under this scenario. And that’s before even looking at the cash. The DDM analysis gives me a fair value of $123.12.

Not hugely undervalued, but this market doesn’t offer many opportunities like that. Instead, I believe we have a quality business available for a price below what it’s worth. And that’s saying something. But that’s just my viewpoint. Let’s compare that to what some professionals think about this stock’s valuation.

Morningstar rates AAPL as a 3-star stock, with a fair value estimate of $133.00.

So we’re all in the same neighborhood here. Averaging the three values out gives us a final valuation of $122.74. That would indicate this stock is potentially 8% undervalued right now. It’s not as cheap as the last time I covered the stock, due to its strong recent performance, but I think this is still a great long-term investment opportunity. 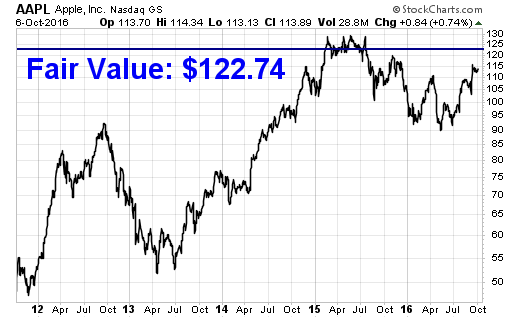 Bottom line: Apple Inc. (AAPL) is about as high quality as it gets, with very strong fundamentals. Smartphones are ubiquitous, and I believe that’ll continue for many years to come. Although it’s not the cheapest stock around, 8% upside on top of a capacity for incredible long-term dividend growth is something to take a good look at.