It is hard to believe we are already in the fourth quarter of the year already. Time seems to go by much faster once you hit 50!

The market has held up remarkably well in 2016 given the atrocious start equities got off to in January of this year.

[ad#Google Adsense 336×280-IA]This is especially true as it looks like the third quarter will be the sixth in a row where the earnings within the S&P 500 will have declined on a year-over-year basis.

Add in a domestic economy that will post less than two percent GDP growth for 2016 when the books are closed and global economic activity at anemic levels not seen since 2009, it is quite impressive stocks have posted any gains in the first three quarters of the year.

Of course the Federal Reserve and the other major central banks have made equities the only game in town with the Fed’s European and Japanese counterparts now pursuing negative interest policies.

Add in an upcoming election between two deeply flawed presidential candidates with the largest negative ratings of any major nominees since polling records starting being kept, investors should be grateful the stock market has ground out any gains this year.

I almost feel sorry for whoever “wins” this election. The national debt has roughly doubled over the past eight years and the Federal Reserve has quintupled its balance sheet over that time frame as well. With the deficit starting to rise again even with rock bottom interest rates, the 45th president will have less leeway to either chop taxes or raise government spending than any president since Harry Truman after WWII.

In addition, given how deeply divided the parties are it is hard to see either candidate getting much of a traditional “honeymoon” especially given their high negative ratings and the fact that neither party will control all three branches of government once again.

One of the few areas of the agreement between the two parties seems to be that the country’s infrastructure is aging and overdue for much repair. Both parties will also want the slowly improving housing market to continue to trend up given that sector of the economy is a large job generator.

Housing should also benefit from years of pent up demand due to significantly below average annual housing starts over the past decade, rising household formation, and historically low mortgage rates.

Here are a couple of undervalued names to play this part of the economy that should do well regardless of who gets elected in early November. 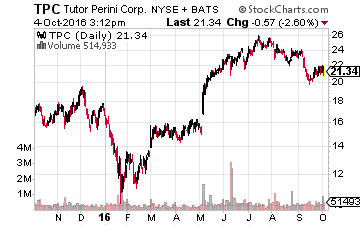 Let’s start with Tutor Perini (NYSE: TPC), this construction giant should benefit from both of these themes.

A good portion of its business comes from local, state and Federal governments to build large scaled developments like Brooklyn Yards as well as mass transportation projects like hi-speed rail.

Another part of its business is building residential structures like the 83 story condo behemoth going up behind my building here on Biscayne Bay down in Miami. The company is tracking to double earnings this year to approximately $2.00 a share.

Even after a nice rally this year, the stock is not expensive at around 11 times this year’s profits. 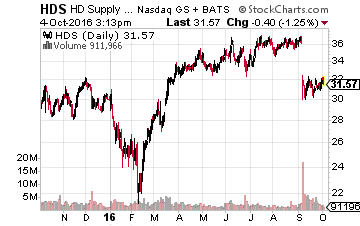 Next up is HD Supply (NYSE: HDS) which was spun off from Home Depot (NYSE: HD) some years ago.

The company offers a diverse range of products and services to the Maintenance, Repair and Operations, Water Infrastructure and Specialty Construction market sectors in the U.S. and Canada.

The company is seeing revenue growth in the mid to high single digits.

After earning just under $2.00 a share in FY2015, the company is tracking to posting just over $2.50 a share in profits this year and the consensus has it earning slightly over $3.00 a share in the black in FY2017. Given this earnings trajectory, the stock is not expensive at just over 10 times forward earnings.

The CEO must agree the shares are undervalued as he picked up nearly $1 million in new shares on September 22nd according to recent filings. 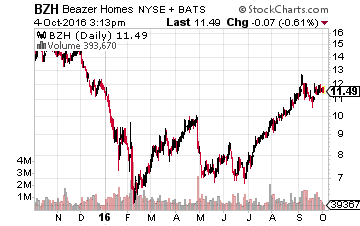 Finally, we end with another construction focused concern that insiders have been buying recently.

That is Beazer Homes (NYSE: BZH).

Compared to other major builders like Lennar (NYSE: LEN) and Toll Brothers (NYSE: TOL), Beazer is very cheap on both a price to sales and a price to book valuation comparison.

The company continues to improve its balance sheet which is a key reason it sells at a huge discount to its homebuilding brethren.

Several insiders have purchased over $1 million in total in new shares with buys registered in May, August and September. The company should only deliver around 40 cents in earnings a share this year. However, the consensus calls for a $1.00 a share in profits in FY2017.

If the housing market continues to slowly improve, the home builder has years of steady growth ahead of it and its valuation discount should erode over time. At $11.50 a share or so, the shares are cheap given its longer term potential.