It’s useful. It’s food. It’s fuel. It’s used to make plastics, which can turn into a ton of useful products.

And it keeps getting cheaper.

Plus, it just entered the fourth year of a bear market. But that’s giving investors an opportunity today. Let me explain…

Take a look at the chart below, which shows the price of a group of corn futures… 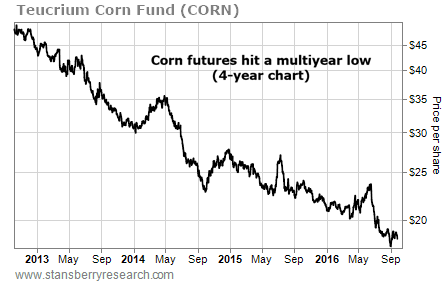 Corn prices recently hit their lowest level in 10 years, down more than 60% from their 2012 highs.

The problem is that corn farmers are getting too efficient.

As a result, prices keep falling. That’s good for consumers and farmers who raise poultry, beef, and pork.

But food makers are also making a killing. Companies like Tyson Foods (TSN) and PepsiCo (PEP) use corn to make everything from sweeteners to alcohol.

If corn prices continue to stay cheap or fall even further from here, shares of both Tyson and PepsiCo will move higher.

But corn is a cyclical commodity, just like oil or gold. All it will take is a drought or some other problem and we could see corn prices rocket higher. In that case, the Teucrium Corn Fund (CORN) will be a profitable speculation.

We’re keeping a close eye on corn prices… I suggest you do the same.